Okay, I’m sure you’re wondering about the grudge, so let’s go there first. I was always a huge fan of the AFI top 100 movies lists. Starting with the 100th anniversary of the motion picture, they would do a big fancy four hour TV show every year listing the American Film Institute’s choices for top 100 movies, stars, romances, thrillers, etc, with bits from A-list stars talking about them. I would watch it with my brother and my dad, and we’d critique the choices, talk about what should have made the list, what could have been higher or lower. It was genuinely a highlight of my year. And when they announced they were going to do 10 top 10 lists of a variety of genres, and one of them was going to be animation, I was incredibly excited.
And what was on that list? Seven Disney movies, two Pixar movies, and ONE from another studio. And it was freaking Shrek. Not The Iron Giant, not The Land Before Time, not The Secret of NIMH, not South Park, not Chicken Run, not… Okay, that’s a rant for another day. But what really bothered me was that of the seven Disney movies, four of them were from the first five the studio released! And number one? The BEST animated movie of all time? Snow White and the Seven Dwarfs.
Really, AFI?!, I ranted, Not only do you refuse to acknowledge the broad range of animation films, you confuse age for quality. I’d never seen it, but I knew! The first of something is never the best. The Model T is not the greatest car ever. The Edison cylinder is not the finest media storage device. And Snow White can’t be the greatest animated movie of all time. Still, I always felt slightly unjustified in that. Well, now I’ve finally seen it, so… How did it measure up?
Well, frankly, it’s a lot better than I thought it would be. For one thing, the quality of animation is mostly stellar. They do a lot more complicated things than I would have presumed them capable of. Disney obviously knew what was riding on this, and the animators really brought their A-game on the Queen, the Dwarfs, and the animals. Snow White and the Prince are rather unfortunately rotoscoped, which makes them not quite fit in with everything around them, but from the perspective of a 1937 movie watcher, I can tell it still looked amazing. Even from that perspective, though, I can’t get past Snow’s voice. It’s shrill and nasal and horrible. And the Prince sounds like Dudley Do-Right. But again, the Queen and the Dwarfs, voiced by future stars in the fledgling field of voice acting (most notably Pinto Colvig as Grumpy, who sounds like a cross between an old prospector and a pirate,), are excellent. No, the flaws of the movie aren’t in the drawing or the acting. It’s the writing. 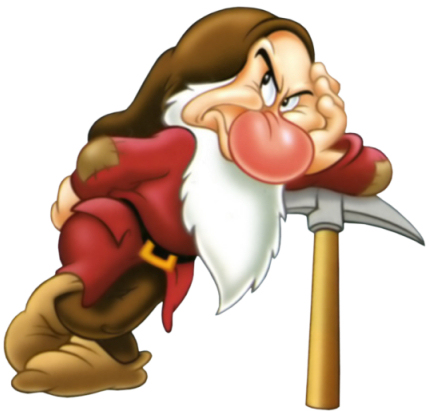 (AND MY PICKAXE.)
Cohesive screenplays were not really a thing in 1937, and Disney was very much a maker of shorts. In that frame of mind, it’s understandable that he was paying his writers 5 dollars per ‘gag’. That’s 75 dollars in 2010, and if my boss was paying me 75 bucks per idea, I’d be throwing a everything at the wall to see what sticks, too. But while this can and does at times work, what it mostly results in is some bits that drag on for way too long and abrupt changes in tone. It does effectively stretch out a very thin story to feature length, but it’s still a thin story. Snow and the Prince have no character at all, and most of the Dwarfs have nothing but their names. The Queen and Grumpy are really the only two with any personality, motivation, or growth in the movie. The songs are suitable, but pretty unremarkable. Good for humming and whistling (while you work, even), but really repetitive and simple for the most part.

(Someone got paid 75 bucks for this, and they forgot a dwarf.)
So to my satisfaction, it was actually a very good movie. The criticisms I had above really don’t do much to the film’s detriment. It’s an enjoyable experience, and I’d certainly let my kids watch it. Is it the greatest animated film of all time? Not even close. Does it at least rate the top ten? Nope. Maybe top 20. Toward the bottom, as a sort of honorable mention.
ADDITIONAL THOUGHTS:
* One of the animators was named “Perce Pearce”. AWESOME.
* It’s so nice that the Queen just keeps a heart-holding box around the place.
* On two occasions, the dwarfs yell “Jiminy Crickets!” Three years later, Disney would make sure no one could do that with any sincerity ever again.
* The bit where the Queen disguises herself is all kinds of awesome. I wish I had a keg of screams and could mix my cocktails with lightning.
* I didn’t talk about the Huntsman, did I? Guess the Horn of Urgency’s on the fritz again. (INTO ACTION! Huuuuuuuuuuunt.)
Posted by Brian Lynch at 5:37 PM