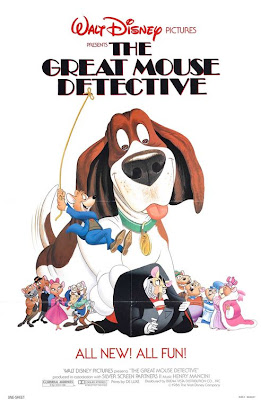 On the surface, there’s a lot going on there that’s similar to The Rescuers. A time of major creative shifts, a fairly obscure British book about mice that solve crimes, inexplicable clothes-wearing - the two seem quite similar. But there are differences. The mice in this one aren’t half-dressed, they’re all the ways dressed, with little pants and ascots and waistcoats and what have you. Also, instead of their homes and possessions being made of human things, they’re all fully built to mouse scale. This full commitment to the scenario means I’ve got less problems with it. Sure, they still have signs and businesses, but it’s a lot easier to have the intellectual disconnect between the human world and the mouse world.

It certainly helps that the story is really solid. It’s a Sherlock Holmes pastiche, which is something that generally works well. It’s a kid’s cartoon, so it trades on a lot of Holmes stereotypes, and the mystery is not exactly intricate, but it’s more than good enough, and they did manage to throw in some references to the classic stories. Dawson served in the same Afghanistan regiment as Watson, for instance. Though I must admit, the fact that the mice are apparently fighting international wars did crack through my suspension of disbelief. Basil is played in the manic Robert Downey, Jr. style, as opposed to the more languid Jeremy Brett style or the intense Benedict Cumberbatch style. This was clearly the right choice for a cartoon, and his introduction, where he bursts in wearing an outlandish disguise and starts firing his gun into the sofa for reasons we are never made aware of, is fantastic.
Supporting characters are also very well-realized. The villainous henchman, Fidget, is a bat with a crippled wing and a peg leg, and I can’t imagine that was easy to animate. He kidnaps a toymaker named Flaversham, which is a delightful name for a cartoon mouse. He’s voiced by Alan Young, doing his typical Scottish accent, and that’s never a bad thing. Flaversham’s daughter, Olivia, is a rather typical moppet, but her pwecious accent and tam o’shanter won me over. The greatest of them all, though, is our villain, Professor Ratigan.

Ratigan is an enormous (well, comparatively) sewer rat who hides a constantly stewing homicidal rage under a veneer of taste and class. The scenes in which he freaks out and straight up murders some of his henchmen are just magnificent, as is his eventual breakdown. His animation is phenomenal, and works absolutely perfectly with the voice, that of Vincent Freaking Price. Price never hit it as big as he could have, due to his association with B-grade horror, but he really is a phenomenal actor, and this role lets him really work his range. He’s so good that the movie isn’t a musical EXCEPT FOR HIM.


To be precise, there are three songs in the film. One, “Let Me Be Good To You”, is sung by the aforementioned stripper in a seedy bar Basil and Dawson are infiltrating. It’s kind of out of nowhere, and has no real plot relevance, except to distract the heroes, but since they only needed to be distracted for half a second, I’m pretty sure this was just the filmmakers having fun. Nonetheless, it is digetic music, which is film music that exists in story, as opposed to background. We see the piano player, we know the audience is watching a singer. Not so with “The World’s Greatest Criminal Mind”, the only straight-up musical number in the entire film. It shows up pretty early on, when Ratigan’s employees are so moved by his evil they sing along with him about how evil he is. Then he feeds one of them to a cat, and they complete the song with rather frenzied and panicked expressions, which is very darkly funny. Also they‘re all drunk.

The last song, Goodbye So Soon, is my favorite in the movie. Ratigan has created a death trap built of every way he’s ever wanted to kill Basil. Basil and Dawson are tied to a mousetrap, which will set off a pistol, which will trigger a crossbow, which will release an anvil, and then a preset camera will snap a photo of the whole thing. Knowing that he wouldn’t be able to be there, he sets the mousetrap to be activated via a rope pulled by a phonograph arm. And for the occasion, he records a special song about how time is fleeting and how bittersweet it is to say goodbye. It’s hilariously upbeat and swinging, and provides the perfect background noise for Basil’s despair at his imminent death.

This movie is also where character animators really start to shine, becoming truly distinctive. Ratigan was, I believe, animated by Disney legend Glen Keane, who would go on to animate a similar battle of savagery and civilization in The Beast, so it’s great to see him applying the same to a villainous persona. I had thought he was done by Andreas Deja, but he was still fairly new, and doing the comparatively minor character of Queen Mousetoria. You’ll see these two names pop up a lot from now on, since I was a huge fan of theirs as a kid, because I was a nerd.

Okay, so speaking of the animation, I need to address how they saved all that money I mentioned, and whether or not it looks any good. First of all, it looks great. I’m not sure to what extent the APT process was used, but the characters all have highly simplified designs with large blocks of color and noticeably thick outlines, which surely must have helped. They also used computer animation for the first time ever, to GREAT effect. The finale takes place in Big Ben, and the various gears were built as 3-D wireframe models, which were then printed, xerographed, and painted. The result is a huge sweeping chase that looks nothing short of amazing, and took a fraction of the time and money it would take to do it by hand.

And it worked! For the first time in a LONG time, Disney was a hit with audiences and critics, Roger Ebert giving it a particularly notable endorsement. Disney was back on top, and if you guys remember back to the heyday, you know what that means! Something highly innovative but not altogether great is coming up next!

* The score was by Henry Mancini, who provided the perfect mix of adventuring and cartoony whimsy. But then, he did the Pink Panther theme, too, so he knows what’s up.

* After Basil escapes the aforementioned deathtrap, he grabs Dawson and Olivia just so they can smile for Ratigan’s camera. Because what’s the point of living if you can’t gloat?

* People say “You don’t understand,” a lot in this movie. Not making a point, but it happens often enough to be weird.

* The Animators wanted to call the movie “Basil of Baker Street”, but the execs insisted on the title we got. Basil’s animator sent a memo around suggesting they retitle some of their other movies, like “Seven Little Men Help a Girl”, “The Lady With the See-Through Shoes”, and "Puppies Taken Away".

* Big Ben is actually the name of the bell, not the clock. But this isn’t Hunchback, so we don’t need to get too precise.