If The Little Mermaid started the new formula, and Beauty and the Beast codified it, Aladdin turned it into a full-blown juggernaut. Once again we have a well-known story, a misunderstood iconoclast for a main character, music by well-known Broadway types, and wacky sidekicks. Ohhhh, the wacky sidekicks. This is where they start getting really numerous. But we’ll get to that. For now, let’s see what happens when what was once bold and daring becomes the new standard and kick off the longest running “house style” this production company ever had. The production wasn’t easy, but they had unprecedented studio support, massive critical cred, and a dynamite creative team. Is there any point in a rhetorical question? No, you already know this was good. So get yourself some falafel, and let’s talk about Aladdin. 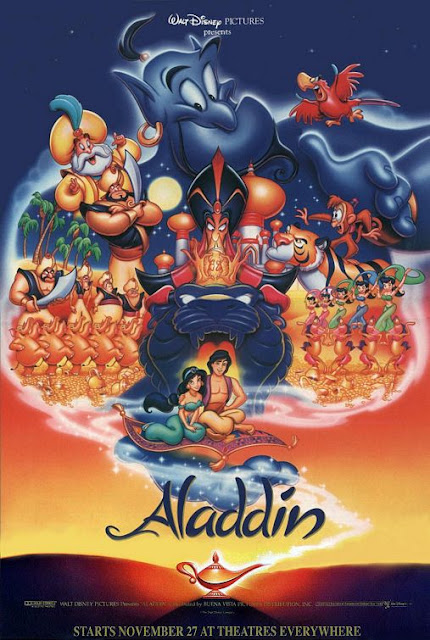 Dang, this one was good. Really well-made, well-cast, and there’s barely a single moment that feels dated. It doesn’t reach the heights of Beauty and the Beast, but that would basically be impossible, and the few minor issues I have aren’t anything approaching the buts of the Little Mermaid. And while there were no big technical leaps in the story (Well, one, but it didn’t catch on. We’ll get to that.), there was one major thematic leap: Princess Personality.

Jasmine is a criminally underrated princess. I can see a lot of the other princesses doing the “dress as a commoner to sneak out” thing. Heck, Cinderella did the reverse, and Aurora did it by accident, so they’ve come close. What I can’t see them doing is angrily insisting that they aren’t a prize to be won. I can’t see them angrily rebuffing the advances of a suitor and physically attacking him. When she finds out Aladdin was lying about being the guy she met in the marketplace, she gets PISSED and asks if he thought she was stupid. Finally, we get a totally confident and self-possessed princess who won’t put up with any patriarchal crap. Belle was close, but she was still, for instance, way nicer to Gaston than he deserved. When Gaston’s Middle-Eastern equivalent shows up to propose to Jasmine, she doesn’t make small talk with him, she throws a tiger at his pompous ass. And she’s clever, too, suing her wits to come out on top in every situation, just like Aladdin does. For once, the lead couple clicks right away and it makes sense on more than a physical level. Also of note - unless I missed something, this is the first time a Disney couple actually kiss each other before their big dramatic ending. We’re getting closer to real relationships every day, folks.


The animation is really good. The design team was influenced by the work of caricaturist Al Hirschfeld, whose swooping lines and curlicues evoked the feeling of Middle Eastern calligraphic art and architecture. The only exception was the villain Jafar, who was designed by Andreas Deja with a lot of long, straight, flowing lines that matched the others, but still set him apart from them. This is the first movie in a while to have a really impressive setting, too. The crowded city streets of Agrabah, the opulent Cave of Wonders, the insanely huge royal palace, all fantastic marvels of design. The layout supervisor, Rasoul Azadani, used his hometown of Ishfan as his primary influence, and the love he feels for it really comes through.

There’s two slips in the otherwise great animation, and that’s from the company’s premature decision to completely integrate CGI elements, inspired by the success of the ballroom in Beauty and the Beast. The results are… less than perfect. The flying carpet, with its complex pattern, is done with CGI and looks great, but it’s also just a rectangle. The other two major uses are not so great. The huge, talking, stone tiger that acts as entrance to the Cave of Wonders isn’t horrible, but does not fit in with its surroundings at all. Worse is Aladdin’s escape when said cave collapses, which is all CGI rendered and looks terrible. I remember being really impressed with it when I was 8, but it’s so flat and blocky and pixilated, I can’t imagine professional animators looking at it and saying, yes, that deserves to be in my movie.


The character’s voices are also great, with one issue that will unfortunately stick around for a while. Minor teen heartthrob Scott Weinger plays Aladdin like he was born to it. He’s not a big star or a famous voice actor, he just hits the perfect voice for it. Which is good, because voicing Aladdin in spin-off media is like 95% of his career now. Linda Larkin as Princess Jasmine doesn‘t have that same spark. Her voice is Standard Princess, but rather lacks the extra je ne sais quoi Jodi Benson and Paige O’Hara had. She’s fine, though. Douglas Seale, who is a small guy with a twirly mustache and big white beard, plays the sultan unsurprisingly well, and Jim Cummings’ “mean voice” makes an obligatory appearance as the chief guard (and like, four people in the marketplace). Jonathan Freeman, ever sinister, rocks the house as Jafar, with condescension and loathing hanging on his every word. His cool menace is nicely contrasted by his parrot, Iago, voiced by Gilbert Gottfried, which is not as bad as you might expect. Gottfried actually does a really good job, and while his character is a bit grating, it’s meant to be, and he actually kind of sounds like a parrot. I’m just not sure why Jafar would have a pet parrot in the first place, let alone a sarcastic comedy relief one. I’d love to know their backstory. There’s one really cute moment where they make a little “Eeeeeeeeeugh” noise together when they think their beheading may be imminent, Iago has a painting of the two of them in his cage; they‘re clearly good friends with a long history. Maybe Jafar used to be a circus hypnotist or something, and he met Iago there. Okay, that‘s my personal canon now.

In exchange for this boon to the budget, The Actor Who Played The Genie simply asked that his name not be used in advertising, and his character not be a sole focus of ads or merchandising. He had a live-action movie coming out a few months after, and didn’t want Aladdin’s advertising to oversaturate him. Honoring the memory of their dear founder, Disney agreed to his requests and then basically ignored them. This led to some pretty severe acrimony and lawsuits, the hiring of Homer Simpson for the sequel, and most importantly of all, publicity material that really awkwardly had to avoid mentioning The Actor Who Played The Genie by name.


There are two actors that I am less than enthusiastic about, and that’s Broadway types Lea Salonga and Brad Kane, who provide the singing voices for Jasmine and Aladdin. Starting now, and continuing for a long time, Disney gets into a bad habit of hiring actors who can’t sing for their musicals, and having separate singing voices who sound nothing like them. Kane in particular sounds like a goofball, but with Salonga, it’s hard to imagine why they didn’t just cast her as Jasmine. It’s not like Linda Larkin is a big name, and Lea Salonga’s a very good actress. It gets worse before it gets better, though. At least this is just for one song.

On a final, uncomfortable note, there is a little bit of that classic Disney racism in this. The film came under fire upon its release for its use of stereotypes, and I must say, the protestors had some point. While the leads look appreciably Semitic, they are also attractive and voiced by white, white actors. The minor characters, especially in the market, tend more to being ugly caricatures with thick accents that wouldn’t be out of place in a Jeff Dunham show. Fortunately, outside of the marketplace, the stereotyping tends to be of the bland, setting-based type. It may look a bit silly, 20 years on, and in 20 years more, it’ll probably look a bit like the crows from Dumbo, but like them, it should be easy enough to get past. Other than the guy who tries to cut off Jasmine’s hand as punishment for stealing, I don’t think anything hits Class 1 in this movie.

So yeah, what else is there to say? It’s a hell of a good movie, it holds up remarkably well, and I’d recommend it if it wasn’t for the fact that you’ve all already seen it. But hey, see it again.

* The reason they had to get influence from an American cartoonist whose work resembles Arabic writing and architecture rather than cutting out the middleman is that there isn’t any Arabian figure art to draw influence from. Islam, like Christianity and Judaism, forbids making drawings or sculptures of anything that exists in the real world, but unlike the other two, they’ve decided that that’s one of the rules they pay attention to. Creative Arabian types got around this by producing some of the most impressive buildings of their age, and some of the most impressive calligraphy ever. You ever see an Ottoman sultan’s signature? Redonkulous.


* Speaking of history, the reason the villain is named Jafar is because of a historical vizier, Ja’far ibn Yahya, vizier to the caliph Harun al-Rashid. Ja’far was not remotely villainous, he was actually kind of awesome. He was a huge booster of science, bringing scientists from all over the world to Baghdad, and leading the movement to translate ancient Persian works into Arabic, and introducing paper to the caliphate. So awesome were he and his boss, that they were written into the Thousand and One Nights as characters, with Ja’far being a sort of detective, solving a murder mystery, and later appearing as an Indiana Jones type adventurer. So why is the villain named after him? Simple. Ja’far was so famous that his name became synonymous with ‘vizier’. If you needed a name for a vizier, Ja’far was the easy choice. It’s like naming a butler Jeeves. So the filmmakers probably just noticed the vast amounts of viziers named Ja’far (or Jafar or Giafar) and figured it was a good choice.

* Speaking of Jafar, his face and neck are different colors, and that has always bugged me.


* The Genie only has four fingers, to indicate that even in a cartoon world, he's a cartoon. Nice touch. He also loses his wrist cuffs and grows feet as soon as he is freed, but those get undone in the sequels, probably because he looks weird.

* As soon as Aladdin discovers the carpet is sentient, he starts referring to it as “he”. What if it’s a girl carpet, Aladdin?

* Friend Like Me was the first segment animated, and Aladdin is reeealy off-model in it, because his design hadn’t been finalized. But no one notices because the Genie is pulling all the focus.

* Why does The Cave Of Wonders contain all that fake treasure? I suppose it could be to test people, but when Jafar sent his goon in at the beginning, he didn’t get done in by his own greed, he got immediately eaten by a giant stone tiger head.