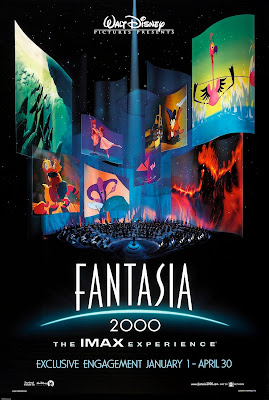 SYMPHONY NO. 5 IN C MINOR - I. ALLEGRO CON BRIO

Better known as “Beethoven’s Fifth”. Even better known as BUM BUM BUM BUMMMM. Via a little snippet of good ol’ Deems Taylor’s voice in the opening montage of clips from Fantasia, it seems we’re meant to take this as something like the Toccata from the first film, meaningless abstract images. Unfortunately, there’s a clear meaning. There’s some colorful triangles and some black triangles, and they have a fight, and light and color triumphs over darkness. And good thing, too, else it’d be a real short movie. It was all right. I showed it to a first grade class and they got a kick out of it, so it did its job.

After some not-horrible introductory patter from Steve Martin and a segment intro from Itzhak Perlman, we go into our next segment, which is done mostly in CGI, and features whales swimming about in a frolicsome manner until a star explodes, giving them the ability to fly about in a frolicsome manner. It’s quite lovely, though the cursory attempt at a plot - a young whale gets separated from his parents - gets in the way of the real attraction, which is that whales look awesome, and flying whales even more so.

After an introduction by Quincy Jones, who looks more and more like Billy Dee Williams as the years progress, we visit New York City in the film’s longest segment. To the tune of George Gershwin’s jazz-influenced classic, various New Yorkers of all races and classes go about their daily business, in a variety of quite funny vignettes. The character designs are based on the art of Al Hirschfield, who had previously influenced the design of Aladdin. The segment was directed by Eric Goldberg, who had started it as a personal project, but when a segment for this film was needed, Disney offered to produce it in order to give the Emperor’s New Groove animators something to do while that movie underwent an extensive retool. The result is a very fresh and funny segment that doesn’t quiiiite fit the rest of the film. One thing that’s particularly striking is the heavy use of piano, which saw a bit of use in the last segment and none at all in the entire first Fantasia.

Whoop. Speaking of piano. After a visibly drunk Bette Midler sundowns all over the screen by way of introduction, we proceed with our story, an adaptation of Hans Christian Andersen’s “The Steadfast Tin Soldier”. It’s mostly okay, but probably the weakest segment in the movie. The designs are nice, but the animation is blocky, early days CGI, and is frequently choppy and uneven. The pacing is also weird, and the change to a happy ending is mehhh.

THE CARNIVAL OF THE ANIMALS, FINALE

James Earl Jones delivers the introduction to this segment in the most portentous and gravitas-y way he can, which is saying something. This makes for a great joke when it turns out the segment is about a flamingo with a yo-yo annoying his flock. A very short segment at just under two minutes, this is a nice palate-cleanser. It’s funny, and the animation is unique and interesting, featuring no outlines on the birds, which allows the color to dominate. I’d say they should all be like this, which would make the movie very lively and very bright, but also about 12 minutes long. This segment was also directed by Eric Goldberg, but this time, he also did all the animation and made an onscreen appearance with James Earl Jones. Show off.

In tribute to the original notion that Fantasia would include classic works alongside new ones, and in tribute to the fact that Sorcerer Mickey is a real handy marketing tool, we’ve got a repeat. The only new material is an introduction by Penn and Teller where Penn blathers inanely about how all magic is fake. Except Mickey’s? I don’t know. Turn it down a little, buddy.

After the tag at the end of the last segment with Mickey and Leopold Stokowski in silhouette, Mickey runs out in non-silhouette to tell James Levine to stall for time while he and Donald prepare the next bit. Mickey’s not funny, but Levine is charming and interesting, and a little stiff in a Deems-ish sort of way, and it makes me wonder why they didn’t just have him host the whole thing instead of a parade of fairly awkward celebrities. Ah, well.

The segment itself is the story of Noah’s Ark, with Donald as Noah’s assistant, scrambling to get everything taken care of. Along the way, Daisy thinks he was left outside and drowned, and he thinks the same of her. This is a bit weird, as they’re on the ark for months, both doing their jobs. Wouldn’t their paths cross? Wouldn’t Noah mention something to them? Sure, this isn’t the silliest thing about the story, but you have to remember, there are actual adult people in the world who think this really happened, and even they would find this contrivance to be a bit much. Anyway, the animation’s good, there’s some good gags, and the famous “graduation march” is perfect for the bookends of the animals boarding the ark and leaving it. Or should I say… Disemb-ARK-ing?

Angela Lansbury takes us into this last bit, and if there’s one thing we know, it’s that Fantasia movies gotta end with a big-ass monster. In this one, a forest spirit flies around coaxing spring out of winter, until she finds a place her magic doesn’t work. In her curiosity, she accidentally awakens a gigantic firebird who destroys her forest. As she despairs in the ashes, a stag shows her that she can still create life and joy. The animation is really great in this one, particularly in the movement and emotions of the forest spirit and the firebird’s emergence as a wave of lava. (I’m not going to call it a pyroclastic foe. But mostly because I feel bad about the ‘disembarking’ pun.)

* Okay, none of the hosts were that great, but Bette Midler was really deranged. Her segment discussed various rejected Fantasia segments from over the years, but they didn’t seem to script any of it for her, resulting in bizarre reads of lines like “And here’s some art for a segment based on Wagner’s ‘Ride of the Valkyries… Here they are!.. And there they go,” as still images float along beside her. And the whole time, she’s holding her hands on her stomach with her elbows out in a very awkward manner, unmoving. It’s all very odd


* When Mickey speaks to Leopold Stokowski, Walt’s voice has been dummied out and Wayne Allwine’s put in, to be consistent with the new material that follows. Take that, beloved founder of our company!

* In my Uncle Scrooge comics, Donald has white sclera, but in animation, he has blue sclera. Not that this means much. I just wanted you to look up ‘sclera’. Now you’ve learned something!

* Both CGI pieces were completed before Toy Story, but not released until 5 years later, so they look clunky even by the standards of the day.
Posted by Brian Lynch at 7:24 PM