With the smashing success of Space Jam, it’s kind of surprising that after it left theaters, Warner returned to not doing much of anything with the characters. There was the occasional straight to video short, or a terrible video game, and of course, the constant advertising, but a Space Jam sequel proved either beyond the company’s reach or beyond their ambition. I’m sure to this day there are “Space Jam 2” treatments rattling around Warners’ development hell division, probably about Lebron James at this point. But it wasn’t until 2003, 7 years after Space Jam, that the Tunes finally got another shot at the big screen. And this time, rather than a director cloaked in mystery, the film was in the hands of cult film mastermind Joe Dante. Would lightning strike twice? Or would this movie, unlike Space Jam, actually be preferable to being hit by lightning?

A COMEDY LEGEND DEEPLY DISAPPOINTING ME!
s
NO, NOT BILL MURRAY THIS TIME!

IT’S LOONEY TUNES BACK IN ACTION! 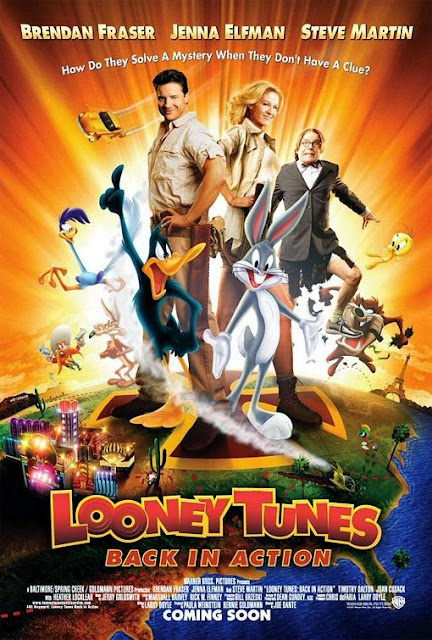 Let’s talk about Joe Dante for a bit. I don’t think it’s unfair to say that of any live-action film director out there, he has the most Looney Tunes-like sensibility. This is often blatant, as in Gremlins, Gremlins II, Small Soldiers, and “It’s a Good Life” from the Twilight Zone movie. But it even seeps into his other work, as seen the anarchic mania of The ‘Burbs, the subverted nostalgia of Matinee, and even The Howling, which was a straight horror film, but still packed with inside jokes and references. When he was announced as the director of the new Looney Tunes movie, I was extremely excited. I literally can’t imagine anyone I’d rather have at the helm.

But there’s a flip side to that, too. Dante is not a director who plays nice with the studios. He tends to go over budget and over time due to his devotion to the craft, he always sides with writers and actors over executives, and his love of references and homages can result in free advertising - or worse, expensive licensing - for other studios. Like Terry Gilliam, he’s a director whose work has been very well-received, but who still has to struggle to get his dream projects funded. There’s a reason the majority of his work over the past 15 years has been TV episodes and anthologies.

But the trouble is, a Looney Tunes movie is obviously going to be micromanaged to infinity by the suits, as we saw with Space Jam. This led to the fear that Dante would be hamstrung by studio demands and not be able to really make the movie he wanted. And I regret to say that’s more or less the case. There are flashes of the usual Dante magic, and those were always the best parts of the movie. To wit:

* Cameo appearances by Dick Miller and Robert Picardo. Miller has been in every one of Dante’s movies, and Picardo has been in all but two. Seeing them there reminded me of who was running this show.

* The reference jokes were really on point. An early scene features Shaggy and Scooby Doo at lunch with Matthew Lillard, complaining about how he portrayed Shaggy in the movie. A scene set at Area 52 (Area 51? That’s just a paranoid fantasy.) features appearances by the Metaluna Mutant, Ro-Man, Robby the Robot, a pair of Daleks, and, of course, Marvin the Martian.

* There was a lot of sniping at executives, in the film, particularly with a pair of characters called the Warner Brothers, a pair of childlike imbeciles who ran the company, and Kate, the executive who was put in charge of the Looney Tunes despite having no sense of humor or knowledge of the characters, because she could successfully monetize them. Huh. No wonder the studio hated him.

The best and worst anti-executive humor in the movie comes at the hands of the movie’s villains, the ACME corporation. Their boardroom is filled with a long line of Vice Presidents with ridiculous titles, including the VP in Charge of Bad Ideas, VP in Charge of  Being Unfairly Promoted, VP in Charge of Stating the Obvious, and (a cameo by Ron Perlman, yay!) VP in Charge of Never Learning. The worst… Ah, we’ll get to that. First, the plot, such as it is.

Like Space Jam, the film co-stars a popular human person alongside the Looney Tunes. Unlike Space Jam, the film is smart enough to put the Looney Tunes front and center, so it’s all good. The human of this film is Brendan Fraser, playing Warner Bros. security guard DJ Drake. Drake wants to be a stuntman, but his career has been sidelined after Brendan Fraser put the rumor out that he doesn’t use a stuntman, causing Drake’s work in the Mummy films to go unnoticed. Yeah, it’s a little weird. There is also Jenna Elfman as the aforementioned executive Kate, who fires Daffy Duck for being difficult to work with, then desperately tries to get him back, as Bugs refuses to work until she does. Drake and Duck (oh, I get it) eventually join with Kate and Bugs in attempting to rescue Drake’s father, an international superstar spy (played by Timothy Dalton) from the evil ACME corporation, and it’s chairman. (Steve Martin)

In order to explain how these plots come together would take far more time and effort than they’re worth, and I’m pretty sure the movie agrees with me on that point. Like I said last time, in a Looney Tunes endeavor, the plot can be thin as anything so long as the gags land. It’s an excuse plot. Spy stuff sends them to [Location], where [Looney Tunes villain] tries to prevent them from finding [Clue to next Location]. Repeat. The villain/location match-ups sometimes make sense (the Coyote in the American desert, Marvin the Martian at Area 51), sometimes are a bit of a stretch (Yosemite Sam in Vegas, the Tasmanian Devil in the jungle), and sometimes are just plain inexplicable (Elmer Fudd at the Louvre, Beaky Buzzard at the Eiffel Tower).

It’s heartening to see the Looney Tunes villains treated like actual villains, rather than, you know, basketball teammates. And it’s good to see lesser-remembered villains like the aforementioned Beaky Buzzard, Nasty Canasta, and Crusher. And the pseudo-villainous characters like Foghorn Leghorn and Sylvester also make appearances suitable to their personalities. Sadly, the absolute worst part of the movie is the main villain, the Chairman of ACME, played by Steve Martin.


Oh my crap, it is impossible to describe just how awful this performance is. They took one of the finest, most Looney Tunes-ish comedians in the world, and then they give him this awful wig, and short pants, and he has NO funny lines, and his only joke is that things don’t work when he tries to use them, and I HATE IT. When Bill Murray shows up and phones it in, I can roll my eyes and say “Eh, whatever, he picked up a paycheck.” But Martin is giving 100% energy to this absolute turd of a character. I don’t know how Martin or Dante or even the studio hacks could have thought this was funny. It’s not remotely.

There are other big problems, too. The ending sequence, despite the inclusion of Duck Dodgers, is overlong and tedious, and a lot of the bits spread through the rest of the movie are unfunny and unneeded. The human cast is, apart from Martin, good enough. Bill Goldberg does his job well as a silent henchmen, Joan Cusack is charming, if trying a bit too hard, as the Q-esque head of Area 52, and Heather Locklear plays a Vegas lounge singer, and is very… Heather Locklear. Oh my, yes she is. As for our leads, Fraser is his usual likeable self, and Elfman is funny enough in her scenes with the Tunes, but together, they have all the chemistry of a bag of wet newspapers.


The animation cast, unsurprisingly, fares better. There’s only two voice holdovers from Space Jam; Bob Bergen as Porky Pig, who doesn’t do much, and Billy West as Elmer Fudd. West was replaced as Bugs by Joe Alaskey, who also plays Daffy, Sylvester, and a few others. He’s a phenomenal Bugs, and while his Daffy’s not as acerbic as Dee Baker’s, it’s fun to have them played by the same guy, in classic Looney Tunes style. And since the daffy side of Daffy is emphasized in this movie, a less abrasive voice was called for. Warner animation utility man Jeff Bennett plays Foghorn Leghorn and Yosemite Sam to perfection.

The animation was directed by another Disney favorite of mine, Eric Goldberg, who not only made the movie look ten times better than Space Jam, but also expertly voiced Marvin the Martian, Speedy Gonzalez, and Tweety. This is not the most surprising voice casting in the movie, though, as the end credits revealed to me that the Tasmanian Devil was actually voiced by Brendan Fraser, who did such a good job, I never would have guessed it wasn’t one of their regulars.

So yeah, it’s not a very good movie. But you know, it’s the kind of not very good movie where you wind up spending most of your blog entry talking about all the things you liked in it. So even if you don’t have a blog, go ahead and give it a shot. The individual bits are more enjoyable than not, the actors - except Steve Martin - are decent, and it’s a good-enough looking movie.


So that’s it for Warner Brothers Feature Animation. In our next entry, we’ll move once again back in time, to take a look at the flop that first got Warner interested in producing their own animated fare.

* Another way Dante is like Terry Gilliam is that they keep being offered big budget tentpoles and then losing them. The greatest superhero movie never made is Dante’s 1987 film “Batman”, starring Alec Baldwin as Batman and Tim Curry as the Joker. Oh, it would have been so good.

* This was the last movie with music composes by Jerry Goldsmith, a legend at genre-film scoring who died just prior to completing the score. The soundtrack is typically excellent for him.

* After one really tedious bit with the Chairman, which included a shoehorned Michael Jordan cameo, he triumphantly states “Who’s laughing now!? Apparently no one.” True words, man. True words.