In my anger-driven haste to force my dislike of Rock-a-Doodle out of my brain, through my fingers, and onto the internet, I neglected to mention a key element. The financial fortunes of All Dogs go to Heaven. It FLOPPED. HARD. Well, that’s unfair. Coming off of two massive successes, though, it was a disappointment. It sort of pathetically limped to making its money back, getting savaged by critics along the way. And the reason for this is clear. The Little Mermaid came out THE SAME DAY. Not even, like, a week later. Of course the weird, disjointed, god damn dead dog cartoon was going to draw unfavorable comparisons to the Return of Disney. As a result of the mediocre box office against the inflating budgets of Bluth’s in-development films, their new producing partner, Goldcrest films, withdrew funding. Sullivan Bluth’s next four - and, as it would turn out, final four - features were sold off to a Hong Kong holding company called Media Assets, with severely diminished budgets.


Now, the trend of Rock-a-Doodle and the following films is to shoot for a young audience, and I’m not sure how much of that is Bluth’s intention, or how much of it was demands from Media Assets in order to go after a home video market. What I do know is Bluth was stung after The Little Mermaid, and if Disney was going to win the public’s minds with a musical Hans Christian Andersen adaptation starring Jodi Benson as it’s redheaded, prince fetishizing heroine, HE’D GIVE THEM MORE OF THE SAME.
IF IT AIN’T BROKE!COPY IT!IT’S THUMBELINA! 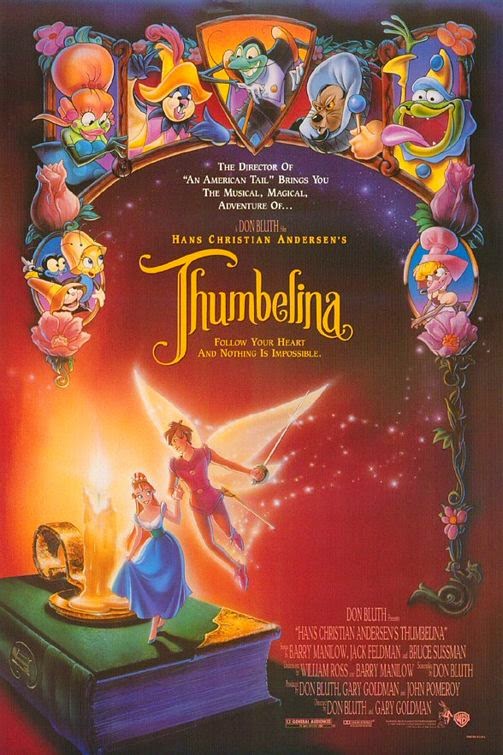 Okay, I don’t know how fair it is to say that they were copying The Little Mermaid entirely. This was deep into preproduction when TLM came out, so at the very least, they were planning on making it. And Rock-a-Doodle and All Dogs were both musicals, albeit less traditional ones, and after writing that sentence, I remembered An American Tail was, too. So the decision to make one isn’t blatant Disney copying. The same actress, though? Come on. And the style of musical, the style of story in general, is verrrrrry Disney for someone who had previously tried to disassociate himself with that studio.


The story... Man, you remember how when I was describing Rock-a-Doodle, it was too insane to manage and I had a breakdown? I feel like the same thing would happen here, but there’s a major twist. While Rock-a-Doodle was a deranged fever dream version of Chantacler, this is, honestly, a completely accurate version of Thumbelina. Certainly more accurate to the Andersen than The Little Mermaid was, and WAAAAAY more than Frozen. The short version of the story is this: An old lady wants a kid. She plants a magic seed, and it gives birth to a hot teenage daughter. The kid is swept away from home and begins an adventure where she has very little agency and everything wants to have sex with her. Then she marries a fairy. The end.


And that’s pretty much it, though I’m not sure “kidnapped” is the right word, since Thumbelina just sort of amiably and vaguely goes along with everything. Like I said, she’s basically got no agency. She only escapes from the frogs because they literally leave her behind, and the beetle kicks her out, so she’s not even making daring escapes from her pseudo-captors. Up until the very end, she’s just sort of... there. She reacts to every minor setback by plopping down and saying “It’s impossible!” Then something fixes it for her. The thing is, I didn’t really mind it once I settled into the movie’s style. Andersen was an effective storyteller, and though the plot is episodic and formulaic, it still kind of worked. There was a clear throughline, with enough variety to keep me from getting bored.


Where Bluth shook it up was in establishing the prince at the beginning of the story, and having the frog and beetle follow her after she leaves them, thus tying the episodes together. This is a good thing and a bad thing. It’s good because it actually provides the audience with more of a legitimate throughline in the story. It’s easier to see the flow from scene to scene. In the story, Thumbelina nurses a pigeon back to health and he saves her, but in the movie, it feels more earned. She meets him earlier in the film and he promises to help, then we see him get injured, then she finds and heals him, THEN he flies her to safety.

But you may notice that this more cohesive story can create new plot holes. If the bird can fly her to safety, why doesn’t he just do that in the first place, for instance? And there are others that arise, too. The beetle and the frog both want Thumbelina to work for them as a singer (Oh, that’s the other thing, everyone’s into her voice. More shades of Ariel.) so why are they working together? Why did the mole decide to keep what he thought was a dead bird in his treasure room? Is it because the bird is the most annoying thing ever? I support that. And even when these segments aren’t causing their minor plot issues, they do make the movie a lot more crowded and awkward. But all in all, I’d say it’s worth the tradeoff of a bit of sense for a bunch of consistency.So all in all, I actually found myself kind of liking the plot, which I did not expect. Once you give in to the madness, it’s actually quite enjoyable. The same cannot REMOTELY be said for the music. Composed by Barry Manilow of all people, with lyrics by someone I’ve looked up like three times and still can’t recall, these are some real garbage. One song, “Marry the Mole”got a Razzie for worst song, making this the first animated film nominated for and to win that ‘prestigious’ award.


The actors, thankfully, largely save it. Jodi Benson, as I mentioned, is basically revamping Ariel, but with even less agency, so she’s fine. Gary Irnhoff is similarly fine as Prince Cornelius, though to pile on the Little Mermaid coincidences even more, he played Harry Osborn on the contemporaneous Spider-Man series, just as C.D. Barnes, the voice of Prince Eric, played Spider-Man. Come on. Ken Mars, who played the King of the Mermaids in TLM, plays the King of the Fairies here OH COME ON. This is a little ridiculous. He does the same voice, but it’s a good one. June Foray plays his wife, and is wonderful as always.

It’s the villains where the casting really shines. Charo plays the Frog, which admittedly takes some getting used to, particularly with them playing up the casting with prominent lips and gag boobs. But Charo has always been more talented than she is perceived by the general public, and her rapid speech and singing work very well for the frog, who seems to get her way by talking too fast for anyone to disagree. Sadly, she is replaced for the remainder of the film by her son, a big bruiser type, who is decently played by Joe Lynch, but is really underwritten. The Beetle is played by Gilbert Gottfried, who does predictably well as the ill-mannered con artist/impresario. His singing is dubbed, but the dubber matches his voice perfectly, to the point when I thought “Huh, who knew Gilbert Gottfried could sing?” John Hurt is suitably withered and creepy as the Mole, and Carol Channing is nicely perky and creepy as the Fieldmouse. Gino Conforti plays that stupid bird, and does a great job performing the character as written, by which I mean if I ever meet Gino Conforti, I’m gonna punch him in the gut. I don’t care that he’s 80, I just hate that freaking bird.


It’s a pretty good looking film, though. Bluth has fully embraced rotoscoping, and uses it better than ever. The dancing beetles look particularly good, with their thin, segmented limbs rotoscoped over human bodies, making them suitably jittery and weird. There is some early CGI that is just horribly integrated, but in general, it’s charmingly old-fashioned. Actually, a lot of it feels like a 1930s cartoon. There are funny animals in random amounts of clothes, for instance, but it feels like just a function of their world this time, and not an infuriating implied secret codependent full society. The animals in the first scene even do that weird 1930s bounce-dancing. Heck, there’s even a blackface character.

Look, this isn’t a great movie. It isn’t even a very good one. But it was surprisingly okay. It’s a slow starter, I rolled my eyes constantly, and our heroes are both kind of dumb, but it has its moments, and builds a decent pace. Overstuffed, understructured, but hey, if your kid picks up the video at the movie rental place, it’s not a bad one. Wait, they don’t have rental places anymore. And I can’t see this taking up limited space at the Redbox. Okay, then, if they… locate it in the… streaming hub? Whatever you people do these days.

ADDITIONAL THOUGHTS:* This is, I guess, the last Hans Christian Andersen story I’ll see adapted for screen. His only other big ones are The Emperor’s New Clothes, which I can’t see anyone adapting for a feature, and The Ugly Duckling, which is reprehensible and kind of racist.


* The movie was distributed by Warner Bros, who packaged it with an Animaniacs short before the film. The short, “I’m Mad”, is far from the best Animaniacs has to offer, but I suppose it’s suitable for the audience. Still, I’d rather they did “The Monkey Song” or something.

* Though on the subject of actors with long birth names, it is well known that Alexander Siddig used to be credited as Siddig el Fadil. Not as well known is the fact that that was short for Ṣiddīq aṭ-Ṭāhir al-Fāḍil aṣ-Ṣiddīq ʿAbd ur-Raḥman Muḥammad ʾAḥmad ʿAbd ul-Karīm al-Mahdī. He doesn’t have anything to do with the movie, I just like his name, and I’m watching a lot of Star Trek lately.

*While I'm used to animals in random amounts of clothes, and while it works better in this movie than others, I draw the line at the fish wearing hats. HOW DO THE HATS STAY ON THEIR HEADS.

* Don Bluth's love of drawing poofy bloomers reaches critical mass in this one, with the mouse wearing nothing but a pair of bloomers so poofy they are basically spherical.

* While The Little Mermaid is the main source of ripoff here, they do also rip off other Disney movies of the time. The scene where the prince romances Thumbelina by flying her around is lifted from "A Whole New World", and just like Beauty and the Beast, they fade into stained glass at the end.