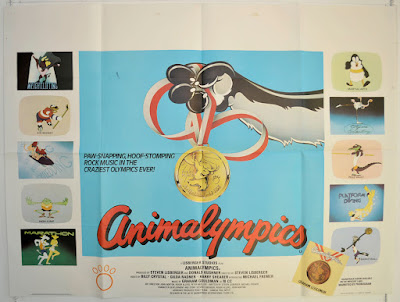 So, yeah, the 1980 Olympics. In Moscow. Some of you reading this have already noticed something of interest in there. For those of you who, like me, were not born at the time, and who, unlike me, are not huge nerds, the US did not participate in the 1980 Olympics in protest of the Soviet invasion of Afghanistan. With no American participation, NBC declined to carry any coverage of the events, and the show was scuttled, with only the ½ hour winter portion reaching America’s screens. (Further note for young people: The summer and winter games used to be held in the same year) But since they had finished the film anyway, they shopped it around until it was picked up by Warner for an extremely limited theatrical run followed by a quick home video release.

Thankfully, now that I’m far removed from the hubbub of the games, I can analyze it as a movie in its own right. Does it hold up, or is it entirely a product of its times that holds no interest without the looming Soviet Union creating olympic fever among the populace? Mostly the second one, I’m afraid.


Welllll… There are some good aspects to it that held my interest right off the bat. The voices are by Gilda Radner, Billy Crystal, Harry Shearer, and co-writer/sound mixer Michael Fremer. The character designs are lively and loveable, and while the animation is more limited than what we’re used to, there’s much more of a creative spark here than there was in the last film. UPA were efficient storytellers with their animation, but Lisberger are clearly animators at heart. And several of the visual gags work very well.

Several of the gags are uninspired, though. Right off the bat, they light the Animalympic torch with a dragon’s flame (which was kind of cool, but does make me wonder why the dragons couldn’t compete.), and then we see a polar bear carrying it through a frozen tundra. So far so good. The bear hands it off to a coyote in a desert, who then hands it to a seal in the ocean, and then it’s the opening credits. This was a fun idea, but why not stretch it out more? Why not show us jungles, plains, swamps? At the very least, it would avoid the implication that the tundra is right next to the desert which borders the ocean. That’s some Super Mario-level geography.

Actually, stretching it out might not be the best idea. Since the movie is nothing more than a collection of shorts, it really spreads itself thin when it tries to do extended bits. The best stuff in the film is when they go really rapid-fire with the gags, which occasionally elicited a smile. But the rest moved so fast and was so unconnected that I just couldn’t get into it. At one point, I realized that I had been sitting like this for almost ten minutes:

It’s just a chore to get through. While the parody of televised sports coverage is pretty on point, with some allowances because 1980, there’s a reason no one is making SportsCenter: The Movie. This type of coverage is meant to be digested and disposed quickly. It’s not meant to sustain interest for an hour and a half. When split up and spread out over a few days of Olympics coverage, I’d probably have really enjoyed it. Like this, it just doesn’t work. There’s a loose attempt to get some plot threads going. A pair of long distance runners fall in love over a 14 day race, a skier gets lost on a trail and discovers Shangri-La or something.

The movie is less racist than I expected? I guess that’s good? I mean, a movie about international competition from 1980, I was steeled for the worst, but there was only one really racist joke (The Japanese guy is a penguin, because they all look the same lol), and a lot of minor stereotyping and goofy accents, but thankfully the majority of the jokes were based on the animals’ species, not their nationality. It helps that they avoided mentioning countries, with the animals representing continents instead, North America, South America, Africa, Asia, Australia, Europe, and “Eurasia”, representing Eastern Europe and the various communist countries, which impressively avoid being vilified, for the most part. I mean, no more than Iceland was in “D2: The Mighty Ducks”.


To paraphrase Orson Welles, this is a very wearying one, it’s unpleasant to write. Unrewarding. The movie was barely passable for its time, and doesn’t hold up today. The animation is acceptable, but there’s no story, there’s no organization, and it frequently breaks for tedious music videos. It almost had its moment, but its time passed without ever really arriving. So, sorry this one is so short, but I work with what they give me.

* The Lisberger studios logo, where flying neon space pyramids create a glowing golden giant who attacks the viewer with laser frisbees, is incredible. Lisberger would go on to conceive, write, and direct TRON, which is no surprise after seeing that.

* I laughed three times over the course of the film. When a bull boxer was getting insulted after a bad match, and the insulter called him “a bum steer”, when an athletic shoe from the industrial age was shown and it was a factory with a hole in the top, and when the cow hockey team was brought to the arena via a slaughterhouse line.