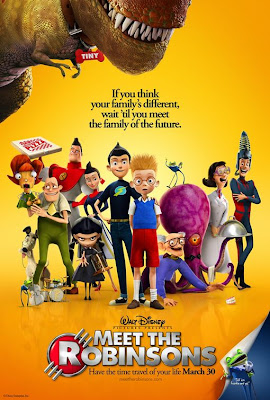 Meet the Robinsons is loosely based on a children’s book by William Joyce called “A Day With Wilbur Robinson”. And by ‘loosely’, I mean “A kid goes to see a weird family named Robinson.” The kids from the book have the same names and haircuts in the movie, as well. And the similarities end there. It’s about a brilliant orphan named Lewis, who invents a machine to recall lost memories in an attempt to find his mother. At the science fair where he’s set to unveil it, two unusual things happen. An ambulatory bowler hat sabotages his machine, and he meets a boy named Wilbur Robinson who is insistent that he finish his project and continue his scientific work. It is eventually revealed that Wilbur is from the future and has followed another time traveler, known only as “Bowler Hat Guy” back in order to stop him from sabotaging Lewis‘s science career. Lewis and Wilbur return to the future, and things kind of go off the rails.

The next long bit of the movie involves Lewis meeting Wilbur’s family in the future. The future, we learn, is a whimsical, if somewhat impractical place. People travel around in floating bubbles, Wilbur’s mom trains singing frogs, he’s got a robot butler, and his uncle is unhappily married to a puppet on his hand. That last bit is somewhat troubling, as this comes off as less a wacky quirk, and more a straight-up mental illness. Like if instead of a dummy mob boss, Arnold Wesker walked around with Loretta Lockhorn on his hand. And neither of them seem happy about it. As for the rest of the family, there’s a pretty significant problem. I have no idea who’s related to whom. The familial relationships are maybe mentioned once, and then basically forgotten about. There’s a human cannonball, a woman obsessed with trains, a pizza delivery superhero, a mad artist, and two people who live outside in potted plants. None of whom seem emotionally stable. Even Wilbur is cagey and paranoid, even if he doesn’t have a wacky gimmick.


This is a problem that comes up a lot. The future they live in is insane, dangerous, and occasionally terrifying, and it’s all due to the inventions of Wilbur’s father, the mysterious Cornelius Robinson, who turns out at the very end of the film to be a future version of Lewis, after an adoption and a name change. I’ve been feeling a bit guilty lately about the casual attitude toward spoilers on this blog. Sure, it was all fine when reviewing 60-year-old movies, or stuff everyone’s seen, or terrible stuff, but we’re within a decade of the present now, and this movie’s marginally worth seeing, so trust me when I say this is not a spoiler, though the movie would think it is.

See, the movie contains a number of what it would have us think of as surprise twists. But they reeeeeeally aren’t. The reveal of Lewis as Wilbur’s father is the most obvious one, but there’s other stuff, and I managed to spot every one of them. I listed them as I figured them out, and my sister, a tremendous Meet the Robinsons fan, confirmed it every time, usually by scowling at me. The Bowler Hat Guy’s motivations was the only twist I had to take a guess at, but it wasn’t a huge leap. I can easily imagine the twists would be less obvious to a child, but they still work to the detriment of the movie. Lewis’s future wife Frannie shows up at the beginning in the present, but the film has to really awkwardly fuss around  to try and let it be our last surprise that the brainy black-haired frog trainer of the present is the same as the one of the future. Which I can’t imagine was a surprise to anyone, no matter how young or stupid.

It sets up a weird predestination paradox thing, too. Does Lewis pursue Frannie because he likes her, or because he knows he’s going to eventually marry her? Or is it some combination of the two, where he likes her because he knows she’s going to grow up totally hot with the voice of Nicole Sullivan? Will he still invent Doris the Bowler Hat, knowing that it may one day escape and take advantage of a demented hobo? If so, it won’t be the former Bowler Hat Guy, because Lewis has already altered the timeline by preventing the event that put Bowler Hat Guy on the path to pathetic obsession, rendering him a happy and well-adjusted child. So if there’s no Bowler Hat Guy, no one steals the time machine and Wilbur doesn’t come back to fix things, which mean’s Lewis’s life… Goes on exactly as it otherwise would. Wait, that actually works. Well, except for him having knowledge of future events. Man, if they gave him some sci-fi amnesia, this would be one of the only sci-fi movie without plot holes I’ve ever seen.


There are plot holes, though, but to honest, not many. The ending seals most of them up, and the plot isn’t particularly solid to start with, so who cares? The plot’s just there to string together the wacky future gags. The gags vary wildly in quality, but there’s not much that’s Chicken Little bad. The Bowler Hat Guy is usually quite funny in how terrible he is at being a villain. The wackiness of the family is usually dull and sometimes deeply concerning, but has a few good jokes in it. I spoke last time about the different types of bad movie, and how Chicken Little was mostly boring with occasional moments of artistically offensive. This is still mostly boring, but the moments that aren’t are usually pretty funny, or at least semi-enjoyably perplexing.

Casting is mostly okay. In addition to the aforementioned Nicole Sullivan, there’s plenty of solid voice actors around. Laurie Metcalf plays a hyperactive scientist, allowing her to break out of her usual generic mom roles. Adam West plays the pizza superhero - Frannie’s brother? Maybe a cousin? They have similar hair. - and shows why he gets to keep doing voice over roles for superheroes. It’s not just a reference joke - he’s REALLY good at it. Wilbur is voiced by someone who sounds so much like prolific teenage voice actor Eric Von Detten that I was legitimately surprised when it turned out not to be. Most of the Robinsons are played by two or three pretty okay actors who I didn’t recognize, which usually means moonlighting animators. Bowler Hat Guy, interestingly enough, is voiced by the director, Steve Anderson. He does a fine job, with the unfortunate happenstance that he sounds a lot like Will Forte, who would have been waaaaay better. So I just keep being reminded of who I’m not seeing.


The animation is pretty bad, too. Thankfully, they didn’t go all Chicken Little this time, and actually remembered they were making a CGI movie. There’s a cohesive design concept, the lines are all nice and smooth, and they make good use of the 3D environment. But still, the quality of the animation is about up to par with what Pixar was doing ten years prior. Faces are stiff and plasticky, hair is animated as solid chunks, and textures seem flat and static. It’s rarely horrible, but they could have and should have done so much better.

Still, it’s well worth a look if you feel like it. It’s got a charm to it, and the 50s-future design is quite nice. And who knows, maybe you’ll take to it like my sister did, and consider it an epic work of art on par with The Seventh Seal in its deep explorations of the concepts of life and fate.

* In a futile attempt to get the audience to know who everyone is, there’s a scene where Lewis gives a rundown of the entire family to Wilbur. This contains two very funny bits, one where Wilbur admits nobody knows who the people in the plants are related to. In the other, Lewis asks what Cornelius looks like, and Wilbur tells him he looks like Tom Selleck, after which point Cornelius is represented in Lewis’s mind by a completely realistic painting of Tom Selleck. When we finally meet Cornelius, guess who provides the voice? According to the director, the wrote the joke first, and liked it so much it gave them the idea for the casting gag. In international versions, Selleck’s painting was replaced with a photo of whatever celebrity cameo they had playing Cornelius.

* By the way, the reason his name is Cornelius instead of Lewis is because when he’s adopted, his new parents change his name. I’m not sure that’s psychologically sound for a 12-year-old.

* Speaking of not psychologically sound, I’m not kidding when I say some of the Robinsons are clearly mentally damaged and seem to be miserable with their lives. One of them (an uncle?) is massively overweight and completely sedentary, never leaving his chair, which is usually parked in front of the TV. He’s completely non-verbal, and when a piece of toast lands on his plate at dinner, he starts crying in terror. None of this is funny. I want to call him a psychiatrist.

* Lewis/Cornelius managed to create a Jetsons-level future in what, 30 years? At the most? That’s pretty impressive, if somewhat unlikely.

* Wilbur is careful not to let anyone see Lewis’s hair, lest they recognize the distinctive style. For a brief moment, I thought the color was the problem, and that blondes had been bred out of existence in the future. That seemed kind of dark.


* Much is made of Cornelius’s motto, “Keep moving forward”. It’s not terrible, and it’s nice that the family is shown to celebrate failure as well as success, because failure is what motivates progress. But at the end, they put on the screen a lengthy quote from Walt Disney that contains the phrase ‘keep moving forward’, then fade out the rest of the words, leaving only those three. It’s a nice moment, but a bit contrived to make it seem like “Keep Moving Forward” was an official catchphrase of Walt. It’s better than a usual out of context quote, because at least they show us the context before removing it.

* I kind of wish they had one with absolutely irrelevant context, though. Like “Hey Roy! Help me move this couch into the break room! No, just push! Stop - No, don’t shuffle it around, just keep moving forward!”

* Or “I’m not going to keep this VCR. I’m moving to Anaheim next week, and I don’t see the need to hold onto it, since the fast forward button sticks.”