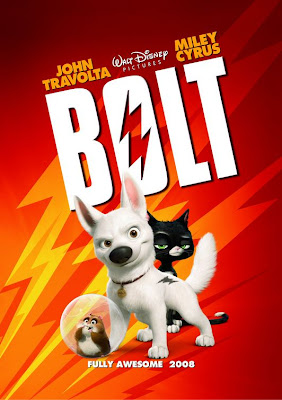 First of all, that troubled history. This movie began its life as American Dog, a movie about a neurotic TV actor dog who gets lost in the desert and has to find his way back to civilization with the help of a one-eyed cat and a giant radioactive rabbit. As with most heavily altered or abandoned Disney films, information is sketchy, and relies on a lot of guesswork. What is known is that it was to be written and directed by Lilo and Stitch’s Chris Sanders, so I’m inclined to assume the best. But when he proved resistant to the suits’ “helpful suggestions”, he was fired from the film, and subsequently left Disney for a position at Dreamworks’ story department. He was replaced by Chris Williams, a story artist who had worked on Mulan and The Emperor’s New Groove, who now had 18 months to finish the film, as opposed to the typical 4 years.

I knew about this little backstory going in, and I wasn‘t expecting much of a payoff. To my surprise, they kind of nailed it. Of all the movies from the CGI period, this is the one I knew the least about and it stands head and shoulders as the best. They clearly learned from previous mistakes. In Chicken Little, they tried to be Dreamworks, and in Meet the Robinsons, they tried to be Disney. Here, they stopped trying so hard and just let themselves be Disney.


The story is wonderful. It starts off with an extended scene from the TV series “Bolt”, establishing the world the dog Bolt believes he is a part of. At the end, we learn that the whole thing was an elaborate setup, and Bolt is returned to his trailer. But this is no mere Toy Story thing, where Buzz Lightyear denies his obvious reality as a toy. Bolt’s show was explicitly set up by its director to appear real to him, with the intent of truly capturing canine emotion and loyalty on film. Does it make a lot of sense? No. Was it even possible to film the opening chase scene on a single soundstage? No. Is it likely or feasible that they could pull off every shot perfectly on the first take? Definitely not. But it’s largely irrelevant. The director’s basically making a dog version of the Truman Show, and he’s portrayed as an insane visionary perfectionist, constantly over budget, so I‘m willing to forgive a lot.

Speaking of Toy Story, that’s a comparison I’ve heard a lot in relation to this movie, and in that it’s about an individual thinking they’re a superhero and then having a rude awakening, they’re right. But they handle it very differently here. Bolt never has one moment of realization brought on by an outside force, but gradually comes to realize and accept that what Mittens the cat has been yelling at him is true. It gives the whole thing a nice edge of maturity for the character in that he’s not shocked out of it by being given an obvious sign. And it makes a great running gag, as the world does give him several obvious signs that he misses. 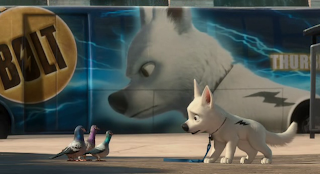 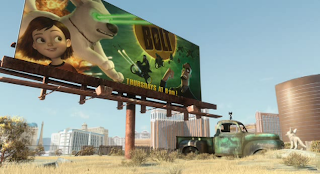 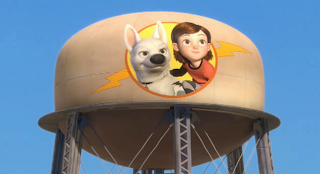 The other characters are similarly well drawn. Mittens is a stray cat, declawed and then abandoned by her owners, leaving her deeply distrustful of humans. Rhino is a hamster and TV addict who joins the two on their journey. He is also unaware that Bolt isn’t a real superdog, which makes a good balance as one attacks Bolt’s delusions while the other feeds them. Bolt’s owner, Penny, is a bit of a dull character, and her mom is less than that, but they move the plot along well enough. The standouts in the human world are the aforementioned director, the ratings-hungry network exec, and especially Penny‘s desperately schmoozing agent, whose tendency to come up with bizarre stories and justifications for everything he does are among the film‘s best gags.

Casting is good, but not great. I don’t know, maybe I’m just used to excellent and it’s making it hard for me to take acceptable. John Travolta is Bolt, and he’s got a nice blend of maturity and naiveté that works well, even if it’s pretty bland. Miley Cyrus is his owner/costar Penny, and does fine as well, though again, kind of dull and generic. Fortunately, the supporting cast steps it up. One of the animators plays Rhino, and really sells the fan boy aspect. I‘ve learned that I generally like when the production staff takes parts in these movies. James Lipton is the director, which I like. He’s more than just a disturbingly earnest talk show host, he‘s a pretty good actor as well. Greg Germann plays Penny’s agent, and while he somewhat apes James Woods’ speech patterns, he doesn’t try to copy his voice, so it’s all good. Malcolm McDowell is delightful in his few brief appearances as Dr. Calico, the villain of the show, and Diedrich Bader plays his pet cat. The cat, who knows he’s an actor, likes to mess with Bolt by going to his trailer and making evil pronouncements, so it’s great that they cast Bader, who’s known for playing easygoing normal guys and evil geniuses, so he plays the switch very well. And Mittens is Susie Essman, which means that in voice as well as appearance and personality, she’s pretty much a ripoff of Rita from Animaniacs.


As far as the animation is concerned, it’s taken a HUGE step up. Now, I’m going to backtrack a little here, because I’ve been disappointed with how hard it’s been to explain the terrible animation of the last two movies, and I think I’ve got it. Here’s a thing - frankly, Toy Story doesn’t look that great by modern standards. It doesn’t. The faces are overly stiff, the backgrounds are limited, surfaces are flat, and the humans just look terrible. But it’s similar to Snow White, and not just because it was the first major animated film of its kind. Snow White is full of bad rotoscoping, weird pans, shaky character animation and all that, but just like in Toy Story, the animation serves a good, solid story, and there’s a palpable sense of giving their all, and of working with their limitations. The reason Snow White has so many dwarves and animals and women in giant capes is because they knew they knew humans would look weird. The plasticky animation in Toy Story doesn’t matter, because they anticipated that, and created a cast made almost entirely of actual plastic.

So it’s a problem when the animation in Chicken Little and Meet The Robinsons didn’t look much better than Toy Story. They didn’t look bad in the understandable, appealing, innovative way Snow White did, they looked bad in the cut corners, lazy animators, using technology as an excuse for making a sup-par product way of The Aristocats. There’s no reason for a movie that came out a decade after the form was created to look like nothing’s changed.

Bolt has no such issues. While the story was pure Disney, the animation was clearly achieved by looking at the work done by their competitors at Dreamworks and their partners at Pixar, and studying how to do CGI right. The weird designs and layouts that came from trying to do 2D stuff in a 3D environment are finally gone. Characters are proportional to each other, the backgrounds are gorgeous and detailed, and full use is made of the depth and scope of the settings, particularly in the action scenes. But the film is not without its own unique look, with soft focus backgrounds and a particular lighting style apparently based on Edward Hopper paintings. Gotta say, though, eyes and mouths still look a little weird.


Conclusion: See this movie! I’m late enough in the game where I can comfortably say it’s not going to wind up in my top 10, but it would have stood a real chance if I was watching them in random order or something. That was something I considered early on, before I determined that going chronologically would be better, as I could track the company’s artistic development. But if Bolt had come in early, it would have hung around in my favorites for a while. Like a good movie that comes out in February and spends a few months in the top ten grossing movies of the year, but everyone knows it doesn’t stand a chance at staying there once the summer season starts. That was a weird metaphor and went nowhere. Whatever. The next batch are way better.

* Okay, I just randomized my list, and Bolt would have been the thirteenth movie I watched had I done that. On the other hand, the Randomizer gave me Chicken Little first, then Peter Pan and Dumbo. Yikes. I might not have made it.

* I must say, after the opening, I kind of want to see a whole movie of Bolt the show. It was kind of awesome. I mean, who doesn’t like seeing a dog jump through a helicopter’s blades? (Wait- how did the director rig that one up? No, I said I wouldn‘t think about it.)


* Failing that, I wish I’d gotten to see the actor who plays Dr. Calico out of character. That would have been a fun bit.

* More on Chris Sanders: He was hired by Dreamworks to try and fix up a lousy script called Crood Awakening, intended to be a co-production with Aardman Animation. In short order, he wound up writing and directing the excellent How to Train Your Dragon. When the Crood Awakening rights reverted to Dreamworks, it was retitled The Croods and given to Sanders to direct. Apparently it’s pretty okay?

* The agent’s best moment, when attempting to convince Penny to accept a fake Bolt: “When I was a little boy, I wanted a bicycle. But my parents got me a baseball glove instead. So you know what I did? I pretended that baseball glove was a bicycle. And I rode it to school every day. True story.”

* Penny was originally to be voiced by an unknown child actor, who still has a brief role as a younger Penny. the kid had only had a few small film roles and a job on the then-current Winnie-the-Pooh series, so she was replaced with Miley Cyrus, whose name could be thrown all over the posters. That kid is doing just fine for herself, though, so it’s all good.

* Speaking of that, Cyrus played an exploited child actor. And Travolta played a big-name star who was brainwashed into believing in a redonkulous sci-fi scenario. I wonder if they noticed.