The Pebble and the Penguin (Sullivan Bluth, 1995)

Do you know what this is like?Do you know what I do for you people? Do you know what it’s like to go from A Troll in Central park to this?This is the worst. I know I said that last time, but this movie is so bad that not only did Bluth and Goldman demand their names be removed from the final product, and left the company they’d founded in the dust. This is the tragic end to  the saga of Sullivan Bluth Studios. From the lofty goals and high standards of their beginnings, to a mess of pandering and shoddy quality, abandoned by its leaders. This is the worst.

Let’s get this over with.

It’s The Pebble and the Penguin. 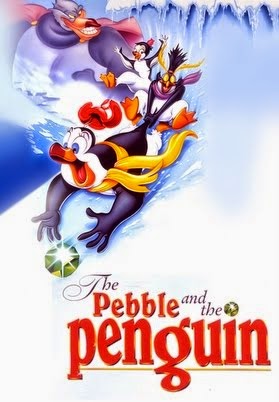 What I have to mention first is what I saw first: This movie is ugly. Well, that’s unfair. The very first thing I saw is an old-timey storybook with “The Pebble and the Penguin” written on it. I initially thought that was the dumbest thing ever, but it turned out to be even dumber: It’s the score. As the penguins sing the TERRIBLE and overly busy opening song, they are shown swimming and dancing and diving around the notes of the score. The terrible score, with its terrible songs. Barry Manilow again, this time with lyrics by the other Copacapana guy.

The penguin designs are hideous. The characters look…I don’t know, upsetting. Like I actually feel unnerved and upset by them. Penguins are squat little no-kneed, no-waisted, adorable birds, and this movie makes them tall, thin, and gives the women waists and hips and legs, and the men weird chests and shoulders. They just look hideous, start to finish. And while I’ve adjusted to Don Bluth animals wearing random articles of clothing, in this one, said articles tend to highlight their weird bodies (the women all wear belts around their creepy waists), and the arctic setting really highlights the insanity of it. I mean, at least the mice and cats lived around humans, so we can imagine where they got the materials. These penguins just live on the ice. And yet somehow they wear capes.


Special attention goes to the aforementioned cape-wearer, our villain, Drake. First of all, “drake” means “male duck”. It’s a terrible name for a penguin. Second, not only does he have an inexplicable cape, he has an even more inexplicable skull-shaped mountain lair. He’s just Evil. For NO REASON. He wants to marry… I don’t know, Girl Penguin, whatever her name is. Why? No reason. I guess because she’s pretty? I mean, a swaggering bully who wants to marry the female lead because she’s hot is Gaston’s whole deal, but Gaston was in a good movie. And he didn’t live in Snake Mountain. And he wasn’t voiced by Tim Curry doing a frankly embarrassing American accent.


Actually, there’s a good thing I can say, the voices are fine. Martin Short is the main penguin, Hubie, and while it couldn’t be more obvious that he only got hired because Dom was busy, he’s all right. The writing on the character is atrocious, though. He’s got a stutter that never really becomes relevant, and the general tone of his dialogue is that of someone who ain’t been quite right ever since Aunt Bessie’s mule gave him a kick in the head. His friend, Rocko, is James Belushi, who really should stick to animation, where his “like John Belushi, but boring and terrible” schtick is replaced with some pretty appropriate hamming. His love interest, Girl Penguin, is played by Annie Golden, who is wonderful, and also the only person in the movie who can really sing. Short and Belushi can carry a tune, Curry would be good if not hindered by his horrendous accent, but Golden can SING.

Not that it really matters, because the songs are atrocious. Easily among the worst songs I’ve ever heard in a musical. If I ever meet Copacabana Guy the Lesser, I’m gonna kick him in the balls for making me listen to Martin Short sing the lyric “Sometimes I wonder what the colors mean”. Seriously. That's the first lyric of the song. That’s the opener. And it gets worse. The songs are garbage. The plot is garbage. It’s based on the mating habits of Adelie Penguins, who give pebbles to each other at the start of mating season, Hubie is all nervous about finding the right stone to give to Girl Penguin. Fortunately, a meteor falls to earth, leaving a perfectly cut and polished emerald because why not. So armed, Hubie tries to get to his lady love and a number of tedious things happen.

Deserving of special highlight is Rocko’s desire to fly. Rocko meets Hubie on a ship where they have been captured for fague reasons (Zoo? Penguin meat enthusiasts?), and after a particularly bad musical number, they escape. After they do, Rocko reveals that he’s always dreamed of being able to fly. At the end of the movie… He can. No explanation, no reason, just suddenly flying around. If they did explain it, I missed it. I think it’s just that penguins can fly, but no one noticed.


For what it’s worth, Bluth tried to keep his enthusiasm up about this movie. You can find interviews with him during production where he speaks highly of it, and it seems to be genuine enthusiasm, not just keeping up a brave face. But by the time it was over, the writing was on the wall. The visuals weren’t there, the story had severe problems, and the studio had no money and no confidence in their directors. So when Fox came along and said “We want to start an animation studio, and we have a lot of money to pay you to run it,” I don’t blame them for jumping ship. If there’s one lesson Sullivan Bluth taught them, it’s that capital is important. Sure, being tied to a studio was what they were trying to get away from, but the money and support of a studio structure could be a benefit in ways that they could now appreciate.

Of course, Fox Animation Studios lasted for two features and one direct-to-video movie before closing up shop, soooo... Look forward to that!