Ah, the glory, the majesty, the having-more-than-twenty-bucks that is Fox Animation Studios. After the relative fiasco that was the end of Sullivan Bluth, Don and Gary were all too happy to follow the jingling purses of 20th Century Fox to run their studio. And run it they did. Right out of the gate, they made something pretty damn epic. A lush and sweeping remake of a Ingrid Bergman movie, filled with all the tricks and gewgaws and all-star voices Bluth had been denied for so long. Did going big work out for our long suffering hero? Or did he soar too close to the sun on sparkly, rotoscoped wings? LET’S FIND OUT TOGETHER. 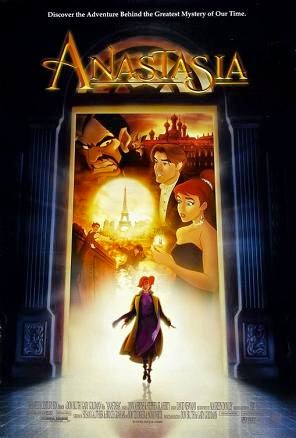 First off, yes, it’s a remake. Not a lot of people know that, but it is. Anastasia was a 1956 film about a suicidal woman with amnesia in inter-war France. When her shockingly close resemblance to the Grand Duchess Anastasia, who was killed in the Russian Revolution,  is noticed by a former nobleman (played by Yul Brynner in a manner that can only be described as exceptionally Yul Brynnerly), he concocts a plan to convince her that she actually is Anastasia in order to swindle her grandmother out of ten million francs’ inheritance, which I think is the equivalent of a bazillion jillion dollars today. Eventually he comes to love her, and when she realizes his deception, declares that he doesn’t care about the money, and they run away together.


In this remake, there are some notable changes. For one thing, amnesia yes, suicide no. Also, ambiguity no. The 1956 film leaves it vague whether or not she is the lost duchess, this one makes it very clear she is. Secondarily, the nobleman has been split into two characters, the handsome young con artist Dimitri, and the sensitive old noble Vlad, the better to have a romance with young and poor Anya without a massive age and power difference. Sixth and lastly, a love triangle with another nobleman that supplied much of the plot conflict is removed. Thirdly, there is an evil wizard, and to conclude, they are lying knaves.

This would be a REALLY easy one to harp on historical inaccuracies with, even if not for the depiction of Rasputin as a zombie sorcerer. It’s puzzling to me why I don’t find the admittedly contemptuous treatment of history in this movie to be as annoying as I did with, say, Pocahontas. Like Pocahontas, it takes an actual and quite serious historical event and uses it to create a silly romance movie. But unlike Pocahontas, you never get the impression that it’s leaning on history to prop up an unsteady story. The essential question of the film is: What if one of the numerous Romanov impostors of the 1920s turned out to be telling the truth? And it’s that “what if” that makes the difference. Pocahontas wasn’t “What if John Smith and Pocahontas fell in love?”, it was “A movie in which John Smith and Pocahontas fall in love.” A subtle but important difference. Pocahontas treated history as a storytelling tool. Anastasia was intentionally an alternate history.


But the question I asked of Pocahontas can still be fairly asked here: Was the story they told worth the changes in history? Was there a purpose behind turning Rasputin from a filthy oddball mystic to an evil monster, making the young Anastasia 7 instead of 17, and moving the Dowager Empress from London to Paris? Was there an excuse for depicting the Romanovs as wonderful and perfect, while the revolution was the result of demons fomenting dissent? Well, as horrible as that last part was, yeah.

Given Bluth’s fallen fortunes of late, and many of the film’s frankly goofy elements, I wasn’t holding out much hope for this movie. To my surprise, it wound up being a charming and heartfelt romance with a lot of good character work and strong animation and performances. It’s not perfect, and frankly would probably be improved if the whole Rasputin plot was extracted, but it’s really good. Probably better than An American Tail. Certainly better than Rock-a-Doodle, but to be fair, so is a nut shot.


The animation benefits immensely from the budget boost. After starting his career disliking rotoscoping, then gradually using it more and more as a budget saver, Bluth has finally just embraced it as a method of animation and it looks fabulous. The movements of the various characters are very natural and look great in the action scenes, and the non-rotoscoped characters, the more cartoonish Rasputin and Sophie, don’t look out of place. What does look out of place, though, is the CGI. I guess Bluth wasn’t happy with the way rotoscoping finally stopped looking hideously out of place, and decided to fill in that gap with some truly atrocious CGI props that don’t so much sit in the character’s hands as float awkwardly around them. I think it was an attempt to do what Disney did with the carpet in Aladdin, to make something too detailed to hand-animate, but it doesn’t work nearly as well.


The voices, on the other hand, work immensely well. The movie does suffer a bit from Bland Lead Syndrome. John Cusack and Meg Ryan are not what you’d call voice actors. They do all right, but they don’t have much to work with in the first place, and don’t have anything about their voices that stands out, apart from both sounding way too old to play their late-teens characters. But the supporting cast really picks up the slack. Kelsey Grammer brings a nice, fussy warmth to Vladimir, Angela Lansbury classes up the joint as the Dowager Empress. and Bernadette Peters brings a wild French mania to the Empress’s cousin Sophie. Villain-wise, Christopher Lloyd is Rasputin, and continues to be the best at the kind of hammy menace that a kids’ cartoon villain needs.


Speaking of Rasputin, it’s been a while since we heard from one of our Disney mainstays, and Jim Cummings is back! He supplies the singing voice for Rasputin, and while his Christopher Lloyd impression is better than his Jeremy Irons, it still just sounds a lot like Jim Cummings. Still, it’s reassuring in its own way, which is more than I can say for Jonathan Dokuchitz and Liz Callaway, who sing for Dimitri and Anna, whose voices neither sound like the actors they’re doubling nor stand out on their own. A pity, as they are reasonably talented and well-known Broadway performers, and probably could have done more if they were playing those parts entirely. And speaking of Broadway, the “additional voices” section of the credits is frankly bonkers. Jeff Blumenkrantz, Gregg Edelman, Billy Porter, Lillias White, Michele Pawk… Look, I know those names don’t mean much to most of you, but the Broadway people are freaking out right now. Freaking J.K. Simmons is in the ensemble here, and sure, this was released only a few months after the premiere of Oz, which made him the star he is now, but still. These are Broadway leads and Tony winners, and having them just doing ensemble voices is the biggest waste of talent since Mark Hamill and Tim Curry did ensemble voices in the first scene of The Little Mermaid. Oh, and Andrea Martin plays like three old ladies in bit parts, which is less than she’s capable of, but at least she gets her own credit.


And since they hired such champion singers, how are the songs? Quite good, for the most part. Written by Lynn Ahrens and Stephen Flaherty, Broadway writers who, while not massive stars, have a few hits to their name (Ragtime, Once on this Island, Seussical). The songs are pretty standard for the era of the Disney Renaissance, with many of the prerequisite tropes hit on. There’s a villain song, a vague song about wanting something, and a big expository opening number. Those are all serviceable, (okay, the villain song is pretty terrible,) but my personal favorites are “Once Upon A December”, wherein Anya wanders through the abandoned Winter Palace half-remembering her old life, and the patter song “Learn To Do It”, where Anya gets trained in royal manners. The latter one is particularly good, as Kelsey Grammer is audibly having the time of his life singing it. Peters has some dumb song about being in France that is kind of a pointless plot spur, but at least serves to remind us it’s the 1920s after spending half the movie in rural areas of the Soviet Union.

Final judgment? It’s good. Much better than I expected, at least, and probably better than its reputation would have you think. I’d actually rank this one higher than An American Tail. And now that I’ve said that, it’s time to hide in my Credibility Bunker. I hope it’s still stocked from the Space Jam riots.


ADDITIONAL THOUGHTS:* I know I said I wasn’t too bothered by the historical issues, but the opening song has the repeated lyric “Have you heard / There’s a rumor in St. Petersburg”, which not only doesn’t rhyme, but the place wasn’t even called St. Petersburg. It was renamed Petrograd by Anastasia’s family to remove the German words “sankt” and “burg”, and then re-renamed Leningrad after the revolution. And “grad” is probably easier to rhyme than “burg”.


* AND SPEAKING OF LENIN. I know I said I wasn’t going to harp on the historicity, but portraying Anastasia’s corrupt, decadent, incompetent family as some golden age of palaces and dances and the revolution as the result of an evil sorcerer’s rabblerousing is, historically speaking, kind of a crappy thing to do. Obviously, the Russian Revolution didn’t turn out that well for people, and by the time Stalin took control, it was a nightmare, but the lives of the common people - you know, the ones who actually rebelled - were pretty awful under the Romanovs. As someone once said, after the revolution, they may have had to wait in long lines for bread, but at least they HAD bread, so it’s a step up.


* For more information, dig this article, which quite fairly characterizes the 300 year Romanov dynasty as “a paranoid, hereditary autocracy which was tempered by assassination”

* That said, the fact that the Soviet guards seen in the movie are just straight up dressed like they would in the 1980s is kind of hilarious.


* I feel like I may be courting some additional controversy by maligning the villain song, which some people regard very highly, but it’s not good. Rasputin’s part is okay, and Cummings sings it well, but he’s backed by a chorus of multicolored chubby little insects, whose part in the song is not only goofy, but they are never seen before or after. I mean, he had these weird demon servants, they couldn’t sing backup?

* Oh, speaking of Rasputin’s servants, you know who I didn’t mention at all? His little bat sidekick, Bartok. That’s because Bartok is completely extraneous to the plot. He adds nothing, does nothing, acts nervous about Rasputin’s plans, but doesn’t actually help our heroes or anything, just leaves and then gets a random girl bat at the end for no reason. He is literally rewarded with sex just for chickening out. And it’s a shame, too, because he’s kind of funny, and very winningly voiced by Hank Azaria, he just makes no sense in this context. Maybe if he were in his own movie with no connection to this one, and I’d like him more. AND AS LUCK WOULD HAVE IT.
* Have some more bonkers fanart. 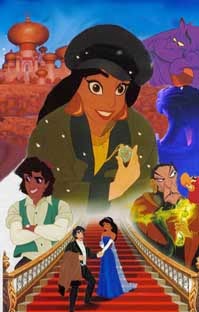