So yeah, the book The Adventures of Pinocchio, by Carlo Collodi, is far and away more messed up than the movie. It was intended to teach moral lessons to Italian children by horrifically abusing a puppet. Every chapter basically goes, “Someone tells Pinocchio not to do something. He disobeys, and is maimed. He is sorry.” But I want to be fair. Let’s go point by point and see who wins. The Talking Cricket’s got one for Collodi already, let’s see if Disney can pull ahead.
THE BLUE FAIRY VS THE FAIRY WITH TURQUOISE HAIR
The Blue Fairy is a sweet and innocent woman who brings Pinocchio to life, levels Jiminy Cricket up, and turns Pinocchio into a real boy at the end. In the book, she’s not needed for the first, since Pinocchio comes to life on his own. Instead, she meets him in her cabin in the woods, and takes care of him for a while. At one point, she has a bunch of forest animals come by to build him a coffin. You know, like your mom used to. When he leaves to go look for Gepetto, she takes her revenge on him by leaving a tombstone in her house saying that she died of a broken heart when he left. Then she shows up periodically to badger him along with the ghost of the Talking Cricket. She does turn him into a real boy, but still, this is a big win for Collodi.
FOULFELLOW AND GIDEON VS THE FOX AND THE CAT
The movie’s fox and cat are a pair of charming raconteurs who sell Pinocchio to a puppet show. And one of them is voiced by Mel Blanc, which is cool. I do find it odd that everyone thinks a little wooden boy is so remarkable, but no one reacts to a pair of anthropomorphic animals strolling around talking and selling puppets into slavery. Still, they are beaten by the book’s pair, who, though not anthropomorphic as such, still manage to rob Pinocchio blind and get him executed.


STROMBOLI VS MANGIAFUOCO
Both the movie and book give us enormous, black-bearded puppeteers who abuse Pinocchio. In the movie, Stromboli is, on the surface, a comical goof, but backstage rants and raves and keeps Pinocchio in a tiny cage. In the book, he rages on and off stage. When Pinocchio distracts his puppets (who are also alive, I guess), Mangiafuoco kidnaps him to use as firewood. Pinocchio pleads for his life, so the guy decides to burn one of the other puppets. Pinocchio begs for that puppet’s life, and the guy has a sneezing fit, decides to eat raw meat, and gives Pinocchio some money. I’m giving this point to Collodi, but it’s less for being scary and more for being just damn weird. Also, I find Stromboli to be really poorly animated. Research indicates that the filmmakers agree with me, so I feel okay about that.
THE COACHMAN VS THE LITTLE MAN
This one's a lot closer, and I almost gave a point to Disney for it. The Coachman is really creepy and cruel, with an imposing physicality and an army of inexplicable hairy gorilla-blob things as henchmen. (Seriously, what were those things?) But the Little Man of the book is even creepier. While the Coachman is gruff, the Little Man is soft spoken and kindly, until one of his donkeys starts trying to speak, and then he goes and BITES ITS EAR OFF. Collodi describes him as "a horrid little being whose face shone with kindness", and makes it clear that he has been doing this for long enough to be a millionaire. Smooth and kindly evil beats rampaging and thuggish evil every time.

(Would you buy a used donkey from this man?)


PLEASURE ISLAND VS THE LAND OF TOYS
Win. For. Disney. In both versions, this is a place with no adult supervision, where kids act like figurative jackasses and then turn into literal jackasses, whereupon the people who run the place sell them to farmers. In the book, the transformation is, like so many other things, treated in a bizarrely matter-of-fact way. Yup, you’re a donkey now. That'll happen. In the movie, they play up the trauma of the weeping donkey-children, and the horror of one's body changing. The scene where Pinocchio’s friend Lampwick (Candlewick in the book) changes is seriously damned traumatizing. It’s like some 1940s kid’s version of a Cronenberg movie. So horrific is it that Disney’s getting this point, even though in the book, the Pinocchio-donkey GETS SKINNED.
MONSTRO THE WHALE VS THE TERRIBLE DOGFISH
Come on. Whale vs. Shark? No contest. Point Collodi. And I’m not sure the Disney animators have ever seen a whale. I question the marine biology credentials of this children’s puppet cartoon. 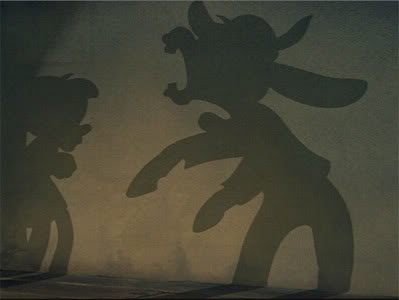 (I Have a Mouth and I Must Bray)


So yeah, final tally is 6 to 1, and there’s a lot more from the book I didn’t cover. But while I can’t get behind the idea that it’s that scary, I can say it’s very good. Sure, the script is still a little all over the place, and the ‘gag’ mentality hasn’t fully meshed with the feature-length mentality, but a lot of that can be related to the book, which even Collodi admitted was a mess. Building a coherent narrative from the mad ramblings of a misanthropic Italian who was just throwing chapter after chapter out to please his editor couldn't have been easy, but they mostly did it. A later adaptation would merge the puppeteer, the coachman, and the sea monster into one character in a pretty clever way, and maybe that's the right path to take. With so much story to get through, all the villains get away scot free, and the story is unsatisfying.
But the movie still works. The animation is practically a full generation ahead of Snow White, with amazing pans, background work, and crowd scenes. Pinocchio's loose-jointed style of movement is hilarious, and while the human characters are off at times, there are a LOT of them, which shows great ambition. Remember, the Queen was the only hand-animated human in the last one, and she wore big flowing robes that concealed much of her body movements. The songs are wonderful, too. Eeryone knows the classics like "I Got No Strings" and of course, "When You Wish Upon a Star", but my favorite has to be "Little Wooden-Head", sung by Gepetto when Pinocchio is still just a puppet. It's catchy, clever, and sets up his character wonderfully. And that's what's going to keep Disney going. This is another one that's on that AFI list, and while I can't say I'd rank it as one of the top 10 of all time, I can easily see myself putting it in my top 10 Disney films. Maybe. We'll see in a year.


ADDITIONAL THOUGHTS
*This film has a weird approach to accents. In Snow White, everyone was American, but here, Pinocchio's American, Stromboli is Italian, the Coachman is British, and Gepetto is — German? I actually think he was trying to be Italian, but... yeah.
*I liked him at first, but after a while, I started to really wish someone would throw a hammer at Jiminy Cricket.
*Speaking of the Cricket, there's a weird running gag where he gets all into pretty girls, but they're all human, or human-based objects, like Gepetto's carvings or Stromboli's puppets. So yeah, that's weird.
*Disney's love affair with cutesy animal sidekicks really starts here. Gepetto gets two. His cat was awesome. Though that does cause some Pluto/Goofy style confusion with Gideon.
*Accidentally Funny 1940s Lyrics Alert : "Hi-diddle-de-day, an actor's life is gay!"
* I meantioned the ambition in hand animating the humans this time, but there is some rotoscoping with the Blue Fairy. Thing is, it works. Whereas Snow White and the Prince didn't seem to fit in with their surroundings, the fairy... Well, she also doesn't, but it makes her seem strange and otherworldly, which is good.
*Gepetto's bed looks super comfy.
Posted by Brian Lynch at 7:41 PM