At the end of the Princess and the Frog review, I mentioned that the underperformance of that film had led to an unusual change in this one, but the more I think about it, it was really just the most visible aspect of a major tonal shift in the marketing. See, the big and clear thing was that the movie was originally called “Rapunzel”, but after the sarcastic quotes failure sarcastic quotes of The Princess and the Frog, they changed the name to Tangled, and gave the male character far more prominence in the advertising. On the one hand, I can see that this is as much his story as it is hers, but still, can you imagine a studio changing the title and marketing of their big release to de-emphasize a male character? Yeah, didn’t think so. They also shifted Glen Keane from director back down to character animator, and with that, changed the design of the movie from his planned and innovative approach to more typical CGI. In addition, the entire tone of the advertising switched to being very action-oriented and Dreamworks-ish, with the posters even featuring the smug, much-maligned “Dreamworks face”. So was this a case of Disney following the lead of the once-surprise dark hose studio? Or did they have a secret plan up their sleeve? Splitting at the ends? So am I. So legally obtain some apples, and let’s talk about Tangled. 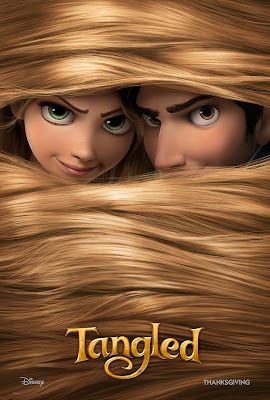