That was me in 1988. A four year old boy into dinosaurs? I know, how original. But I fancy I went a bit further over the years. Anyone can wear a sweatshirt with a dinosaur, but I favored the one from the post office, bearing their stamps, because it was more accurate. I owned a copy of Robert Bakker’s “The Dinosaur Heresies”, even though I could neither define nor pronounce ‘heresies’. I knew what a Dinosauroid was. (and now that I’m older, I know something else a Dinosauroid was: pseudoscience bull malarkey.) I’m amazed I didn’t see this movie at the time, or on video at any point during my long dinosaur fondness. But while my interest might have been scientifically driven, it was far from unique, and after their last success, Spielberg knew what kids wanted to see: Bambi with dinosaurs.

IT’S THE LAND BEFORE TIME! 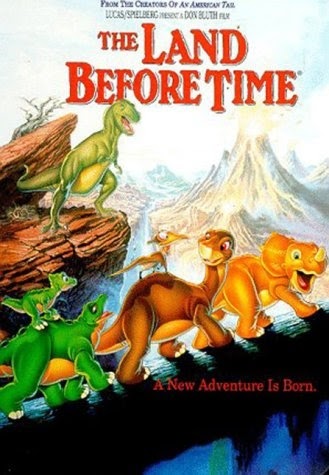 So Spielberg and George Lucas supplied the story, and Bluth supplied the film. And boy, is this a Spielberg story. Parental abandonment, innocence of youth, hero’s journey, all that jazz. This is not to say that Bluth’s directorial hand is not felt, which is all the more impressive, given how out of his wheelhouse the setting is. In the two Bluth movies we’ve already reviewed, and the others I’ve seen, I’ve noticed a few quirks he has. He loves to animate people luxuriously smoking, he loves throwing sparkles all over everything, he loves clattering collections of caliginous junk, he loves characters whose skirts fly up to reveal puffy bloomers beneath (this one is really weird and shows up ALL THE TIME). He loves musical numbers. He loves Dom DeLuise.


The Land Before Time contains none of these things - well, one or two errant sparkles - so Bluth’s occasional excesses that have been a surprisingly common irritant are mostly gone. The Bluth tropes that do show up are the ones that integrate easily into a movie. His love of nature scenes and lush, detailed backgrounds. His emphasis on character interactions over plot details, occasionally leading to a bit of contrivance.

This is not to say that the plot is bad, just unimportant. For the second time on this blog, I’m critiquing a movie about dinosaurs trekking through a bit of a wasteland looking for a fertile area. And while this one came first, it’s not a whole lot more interesting. It’s definitely better, though. For one thing, there’s no annoying lemurs hanging around the place. The characters are a lot better drawn, too, and if they’re a little broad, it’s easier to forgive in child characters. Littlefoot is driven, Cera’s a jerk, Spike’s an idiot, Ducky is eager, and Petrie is nervous. And that’s all we need, because the journey is enough to carry the story here. And the sense of exploration on said journey is much more satisfying in this movie than it was in Dinosaur, which was something of a depressing slog, both for the characters and for the audience. Without a crabapple like Kron to push them along, the whole affair has this open-world feeling that works so much better than a craggy-faced guy who keeps yelling “MOVE MOVE MOVE.”


The trouble that results from that, though is that it leaves all the antagonistic danger-producing to the Tyrannosaurus that follows the kids around. It served its initial purpose well, killing Littlefoot’s mother (and yes, that was very sad, much more so than Bambi’s mom), but when it turned up again, I found it rather boring. It also presents my old “Arbitrarily Silent Animal” issue. Why can’t Aladar talk to the Carnotaurs? Why can’t Tarzan talk to the cheetah? Why can’t the Rescuers talk to the alligators? Why can’t Ariel talk to the shark? You can’t build a world where the animals talk and then just say “except if they need to be antagonists, then they’re just animals.” Bothers me.

No, the fun is in the changing challenges they encounter. All suitably prehistoric, of course. There’s a tar pit, a volcano, a herd of (annoyingly silent) Pachycephalosauri, etc. These dramas can all sort of pile up on each other and make the action hard to follow at times, but they built their tension effectively and generally worked very well. The quiet moments are good, too, though there are a few that probably would have bored me as a child.


The voices are... acceptable. Look, it’s almost all child actors. No adults of note. As previously vouchsafed, Dom DeLuise isn’t even in this one, as he was doing Oliver and Company at the time, and either the schedules conflicted or possibly Bluth decided to pout over it. Pat Hingle has a tiny part, I guess that’s something. And when it comes to child actors, you have to expect that there’s not going to be great work coming out of them, with very few exceptions. One of those exceptions is in this movie, however, in the amazingly charming Judith Barsi. Barsi was a gifted child actor who was tragically murdered by her abusive father just prior to this movie’s release. He was a violent alcoholic who was resentful of his daughter’s success, and ended his life, his daughter’s, and her mother’s in a murder/suicide/arson, and for reasons unknown, his victims were buried in unmarked graves. I mention this because her performance as Ducky, who should by all rights be a supremely annoying comic relief character, is really good and moving and delightful, and yet thanks to my knowledge of this, I was simultaneously happy and sad whenever she spoke, and now you have to be, too.


The animation is also good, though Bluth’s continuing budget struggles are occasionally apparent. The usual small issues with Fudd Flags, and the characters’ heads are often a different color than their recycled bodies, but it’s not really an issue. He uses camera filters a lot more in this, a soft focus one for flashbacks and a wobbly one for underwater. I have to admit, I was hoping for a lot more from this one, animation-wise. And it’s great, don’t get me wrong, but I was just hoping for a little more pop. And that kind of goes for the whole movie. It was great, but I was hoping for... I don’t know, nutty cuckoo super great.


Well, I’ll get plenty of pop in our next one, and while whether I get super-great remains to be seen, I’ll be loaded down with nutty cuckoo. Speaking of nutty cuckoo, here are three things I found on Tumblr while looking for images to include in this post, to make up for it being kind of a short one. Enjoy.


* Speaking of Dinosaur, I recently learned that it wasn’t counted as part of the canon until just a couple of years ago, when they added it retroactively so they could sell Tangled as #50. This infuriates me, because if they hadn’t, Winnie-The-Pooh would have had the 50 spot, which it richly deserves, and more importantly, I WOULDN’T HAVE HAD TO WATCH DINOSAUR.


* One aspect I didn’t comment on was the dinosaur names. Rather than refer to themselves as apatosaurus, triceratops, etc, they have their own names for their species. So the apatosaurs are “long-necks” and triceratops are “three-horns”, stegosaurs are “spike-tails”, and so forth. While it makes sense that they wouldn’t call themselves what humans named them, I do wonder what we’d be called under that system. “Naked-monkeys”?

* The characters seem confused on whether the little triceratops was named Cera or Sara. It’s Cera, but they are DEFINITELY saying Sara sometimes.

* Ebert said of this film  "I guess I sort of liked the film, although I wonder why it couldn't have spent more time on natural history and the sense of discovery, and less time on tragedy.” That sounds about right.
Posted by The blogger at 1:28 PM No comments: