Even before this one begins, I feel an odd sense of change in it. When this film was in its very early production, Pocahontas came out. While it was too late to change Hunchback, and Hercules was different enough to not need it, it was a much more cautious Disney that created Mulan. They hadn’t stopped trying, but the air of confidence is definitely gone from this movie. The budget is, as far as I can tell, comparable to the last ones, but the whole endeavor feels smaller somehow - except when it feels bigger. It’s hard to explain. Really, it’s rather appropriate that a movie with duality and deception as a major theme should so often feel like it’s moving on two separate levels.

The male rabbit is swifter of foot.
The female’s eyes are smaller.
But when two rabbits run side by side
How can you tell the female from the male?

I don’t know, either. So get yourself some chow mein or lo mein, because I always forget which is the one I like, and let’s talk about Mulan. 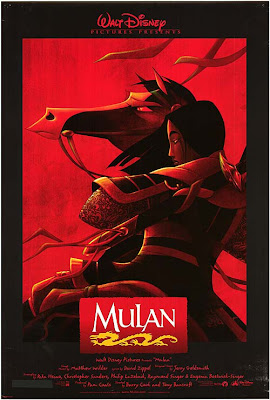 Read more »
Posted by Brian Lynch at 8:24 AM No comments: