Okay, so Alice didn’t exactly burn up the box office, and I get that Walt was probably feeling a bit blue, but did he have to lash out at us like this? What we have here for our 14th entry is, make no mistake, a bad movie. It’s a well-animated movie and a fondly-remembered movie, but it’s bad. I went in not expecting badness. I even took steps to ensure that I would be viewing it as objectively as possible, by watching with my friend Justin, who is far less judgmental of movies than I am. Didn’t work for either of us. But since I try to avoid being overly negative, I think the best way to balance this is to talk about a good thing for every bad thing I mention, and then pass judgment. Sound fair? Good. So get yourself some invisible food that only turns real when you throw it at Dante Basco (this can be ordered from most gourmet specialty shops in Los Angeles), and let’s talk about Peter Pan. 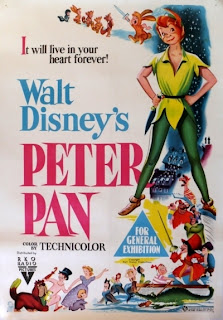 GOOD THING - The acting is top-quality again. Katherine Beaumont returns as Wendy and partners quite well with True-Hollywood-Story-to-be Bobby Driscoll as Pan. Really, all the kids are pretty good, for kids. Bit weird that Michael’s the only American sibling, but whatever. The two main adult characters, however, are brilliant. Hans Conreid, following stage tradition, voices Mr. Darling and Captain Hook, and plays the balances of goofiness and menace inherent in both characters, going hilariously over-the-top for Hook. Smee, his left-hand-man, is played by Bill Thompson. He did excellently as the White Rabbit and the Dodo in Alice, and steps up his game here by also playing most of the other pirates as well.

BAD THING - This movie is INCREDIBLY boring. I’ve complained about padding before, but this doesn’t even shoot for that lofty standard. It’s just full of these draggy bits where people talk and talk without actually saying anything. Which would be fine if there were jokes or characters or something, but it’s all just so much blather. This is probably again a quirk of adaptation. The book Peter Pan is a singularly weird novel. The bulk of the text and the humor comes from the narration. The book is told in omniscient third person, but said person is kind of a weirdo. He doesn’t like the story, or the people in it, and vacillates wildly between claiming to control the characters and passing judgment on everything they do. At one point, he can’t decide which of two anecdotes to tell, so he flips a coin (and complains about the outcome).


Unlike Alice, Pan is not an inadaptable work; there is a plot there. It’s actually rather like The Hitchhiker’s Guide to the Galaxy. It’s a matter of adapting the plot and reworking parts of it so that the mood of the piece is retained without the characteristic narration. Or, like the H2G2 TV adaptation, have a constantly-speaking narrator, but ensure that there is a visually-interesting aspect to said narration. But here, they just keep the events and not the words, not realizing that the events were the least interesting part.

GOOD THING - The design of the characters stands out in several places. Pan, the Lost Boys, the Pirates, and the Indians (OH IT’S COMING) are all rather blah, if not outright ugly, but the Darlings have very expressive and simple designs that work wonderfully. Captain Hook is once again great. His face contorts excellently to the hammy performance of Conreid, and since he’s only got the one hand, the animators really went to town on it. The actual quality of the animation is also great, particularly in the boring boring flying bits.

GOOD THING - Um… They spelled Tinker Bell’s name correctly? It’s a small thing. But I like that Disney is consistent with the proper spelling, given how often it’s rendered as “Tinkerbell”. Actually, her spiteful and petty personality from the book makes it over unscathed, which was nice, since their marketing goes more “happy sassy fairy” with her. I wonder how she’s portrayed in her direct-to-video film series. Well, that’ll just have to wait for “My Year With Lousy DTV Spinoffs”. But any way, kudos to them for getting the book right there. Though they’re also responsible for people saying “Second star to the right”, as opposed to the book’s more absurd “Second to the right”. So let’s call this one a wash.

BAD THING - Holy roar, this movie is racist. And not in a “Crows from Dumbo” kind of way, but in a “Let’s all get really uncomfortable remembering what the US was like in 1953” kind of way. The Native Americans portrayed in this movie are - well, there are none. There are Indians, certainly. And yes, they are referred to as ‘Injuns’. The chief is designed so that he barely seems human, and they all grunt out their lines in broken English and “smoke-um peace pipe” and treat women badly. They have a song, of course, called (argh) “What Makes the Red Man Red”, where they answer questions like that one or “Why does he ask you ‘how‘?” See? They used to be white and speak properly! You know, like normal people!


An oft-stated defense of the movie is that the book also had Indians in it (see Additional Thoughts), but that’s no excuse. There’s a world of difference between what we expect of a rich English guy in 1906 and middle-class American animators in 1953. And the fact that Barrie, who was working off more or less nothing but stereotypes, created a tribe of brave, stoic warriors, while Disney, who could easily get some actual Indians to talk to if they felt like it, gave us idiot savages. Never Land is meant to be a child’s imagination, which is maybe a valid excuse for them having teepees, totem poles, and feathered headdresses all in the same tribe. It’s not an excuse for the characterization. Justin, in addition to being cinematically easygoing, is not a man who is afraid to give offense, and does not take it easily. Even he was baffled by these ‘Injuns’.

SUMMARY THING - Baffling. I think that’s the best word. While the technical stuff is solid, the creativity is just not there in the writing this time. They made two big creative choices. One was to make Captain Hook a fantastic and memorable character, and one was to spend ten minutes of film on making fun of Indians. In the end, the movie amounts to no more than a big ball of nothing with conflicting impulses of something really great and something really horrible fighting to color your perception of the entire thing. When all’s said and done, I just wound up sort of confused and irritable. If you like it, good for you. I won’t try to take that away from you. But I can‘t say I‘m ready to Return to Neverland. Unless My Year With Lousy DTV Spinoffs becomes a real thing. What? Theatrical release? What the hell, guys?

* I try to throw some info on production in the intros, but all the production notes I found were boring. Basically, they were all “Walt had an idea for an original plot point, but decided not to use it. Actually, the original scene ideas sounded pretty okay. Wish they’d used them.

* In the book, the Indians are almost exclusively referred to as ‘redskins’, and their tribe is… ugh… “the Piccaninnies”. Yyyyeah. But still, given the time and the cultural setting, it’s easy to look over those (super racist) words, and as I said, the tribe has it a lot more together in the book. These guys were just morons.

* In the book, sometimes Peter is fighting pirates or Indians and feels the fight is unfair, so he changes sides and starts killing Lost Boys. That book can get pretty messed up. I'm talking Pinocchio messed up.

* Captain Hook’s henchmen are also stereotypes, by the way. I thing one is Turkish, there’s definitely an Italian one, and a Scottish one. One is Irish? Maybe? Smee was Irish in the book. Anyway, I don’t get offended about them, because while they’re stereotypes, they’re also differentiated individuals, their ethnicities form a background to their characters rather than being the entire character, and they’re so vaguely portrayed, I can’t figure out who represents which ethnicity.


* Another way Peter Pan is like the Hitchhiker’s Guide: Both are best known as books, but originated in other media, specifically the radio show The Hitch Hiker’s Guide to the Galaxy and the stage play Peter and Wendy.

* The story’s origin as a stage play explains the famous “clap to save Tinker Bell“ scene. On stage, the actress playing Pan would speak to the audience and get them to applaud. This has been adapted in a number of other media, never all that successfully. In the book, it’s weirdly lifted more or less verbatim, with Pan exhorting his readers to clap, and the oddball narrator describing the various reactions. I think Barrie just wanted to get a dig in at the jerks who booed at the live show. A recent film version showed the captive lost boys, the pirates, and the Darling parents  back in England professing their belief. This version basically ignores it, which I think is for the best.

* The best adaptation I’ve seen is the 1950s stage musical. The songs aren’t much better, but the Indian’s number, while vastly stereotyped, stops short of actual racism; and the characters are all rather self-awarely insane, which makes up for the missing narrative voice. Highlights include Wendy’s retelling of Hamlet (“And they all lived happy ever after!”) and Hook’s insistence that his men play music to help him hatch evil plots.

* And in “weird and pointless changes to the book”, there’s the scene where John is pretending to be Captain Hook with a coat hanger and Wendy makes a big deal out of reminding him it was on Hook’s left arm, which turns out to be true. In the book, it was Hook’s right hand that was lost. In a live-action adaptation, I’d say whatever, but this is a cartoon. It’s not like the actor needs his hand free. What’s the point of doing this and drawing attention to it? Why go to the trouble of pointing it out?

* Man, for not wanting to talk about the book, that’s pretty much all I did. Good thing the next movie isn’t based on one. It’s sort of based on one. Mostly it’s based on a dog.
Posted by Brian Lynch at 9:52 AM