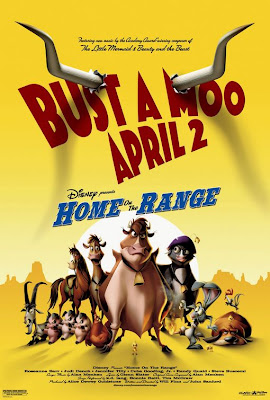 Okay, here’s where we’re at so far. After a rather catchy song that I shortly noticed had absolutely terrible lyrics is sung over some tedious slapstick, we meet our protagonist, a cow named Roseanne. Well, she has another name, but she’s Roseanne. Roseanne Barr isn’t a terrible actor, but she’s really known only for her standup, her sitcom, and a handful of other roles where she’s basically been playing herself, and with a voice that distinctive, I can’t really buy her as anything else. The rancher that owned her has gone bust after a notorious rustler stole his entire herd in one night, and now he’s selling her off to a small farm and moving to California.

At the farm are two other cows, Jennifer Tilly and Judi Dench. Who also have very distinctive voices, but are talented and varied enough actors that I can accept them in a wider variety of roles. But I’m still not learning their names. They’re worried because their kindly owner is about to lose the farm (of course), and flat out refuses to sell any of her apparently awesome animals. So Roseanne, being a former show cow with a lot of apparently amazing skills, is sure she can win them the money. I say apparently awesome skills, because Judi Dench is a COW that can put on a HAT, and how are you going to beat that? Anyway, a few tasteless jokes about whether her udders are real, and we’re all caught up. Okay, I’m going back in. See you in another 11 minutes.


Okay, so the cows are off to the county fair to earn some money for the farm. How are they planning on entering themselves in the show with no human? NO TIME! We also meet Buck, the Sheriff’s horse, who idolizes a bounty hunter named Rico. Rico takes Buck to go hunt down the rustler that ruined Roseanne’s farm, and wouldn’t you know it, the reward is the exact amount they need to save the farm. So they hitch themselves to a chuck wagon and go off to join a cattle drive, which seems a sure target for rustlers.

NOTE FROM THE FUTURE: Hi, it's me, Brian, editing this for publication. If you're wondering, Roseanne's show-cow talents never wind up coming in handy, and that entire plot thread has been dropped. This movie just screams "we never bothered making all our drafts match up." BACK TO THE PRESENT


Two elements I’ve noticed about the movie that I’d like to mention: First, they can’t decide on how animal-like they want to portray the animals. They try to keep their movements realistic, except at random points they’ll have a horse on its hind legs, or a cow with a prehensile tail. It’s like on My Little Pony, where they make a real effort to keep the pony movement within the realms of their bodies, but sometimes they’ll pick up a bowl or something with their hoof because it’s more convenient. Except this is a 100 million dollar movie, not a Flash-animated TV show. And they’re farm animals, not intelligent beings in a fully equestrian society. So no excuse.

The other is that with the cows being a stern authority figure, a brassy former beauty queen, and a dippy new-age type, Disney has basically created the Witches of Lancre in cow form. This is making me like them a bit more, because I’m sure as hell never getting a Wyrd Sisters movie. Anyway, on to the 11 minutes.

I’m actually feeling rather charitable at the moment, as I just came off a rather excellent moment. We finally meet Alameda Slim properly, and he’s delightful. It turns out the technique that allows him to rustle so effectively is his ability to yodel in a hypnotic fashion, causing cows to fall into a trance and go wherever he leads them. He’s voiced by Randy Quaid, who is a damn fine actor, despite also being a giant bag of crazy, and he apparently does all of his own yodeling, which is not easy.

There’s one odd thing in his song, which involves his three sidekicks making fun of his weight, in the form of three references to his having a big butt. Except he doesn’t, because the character is animated with these tiny little Yosemite Sam legs, which makes a total disconnect between the song and the animation. I can get past it, though. The jokes aren’t mean-spirited, and the character is actually well-designed and well-animated. He rides a buffalo, too, which is a neat visual and possibly the only animal that looks good in this style.

I freely don’t expect it to last, as they finished with a joke about how Jennifer Tilly-Cow is immune to the yodel because she can’t sing. Which is admittedly more of a payoff than I expected to what appeared to be a mere “Jennifer Tilly has a squeaky voice” joke.


It’s been difficult to put into words just how bad this movie is. Merely describing what happens doesn’t make it clear how ineptly it’s made. The animation is garish and frequently ugly, and barely a single joke is landing. There’s a gag where Slim puts on his disguise he uses to buy farms, and his henchmen don’t recognize him any more. There’s no joke that follows, that’s the entirety of the joke. And the way they carry it out, and the way they exposit their sinister plan, makes it seem like this is the first time they’ve ever met. It’s like the gag in Austin Powers where Michael York is constantly telling people things they already know (“ The year is 1967, and you're talking on a picture phone.”), but without the joke. Just an inept handling of a conversation they should have had months ago.

Anyway, Steve Buscemi shows up as the black market cattle buyer and does his best with awful lines, and Patrick Warburton is just wasted as Rico’s new horse, who Buck scares off. And I just realized Buck is Cuba Gooding Jr, who was right at the height of his apparently trying to prove that winning an Oscar doesn’t have to stop you from having a horrible career.

After a joke about Buck being the stallion of the Cim-Moron, which I think is the most direct jab at another company I’ve seen in a Disney movie ever, the girls have capture Slim with the help of a peg-legged rabbit (he’s unlucky, har har). All right, I’m going back under.


So Rico is working for Slim, in a twist that I might have actually been surprised by, had the film invested even a little bit of time in developing his character. Things look bad for the girls, then they look good. Steve Buscemi reminds me of Lucky from Ichabod and Mr Toad. Moving on.

And the girls save the farm with some tedious and artless slapstick. That’s it. I’m done. This was a painfully bad movie and while the acting was good, as usual, and there was the odd chuckle in the script, the final product is a tedious and annoying collection of barely even trying. Just prior to its release, Disney announced that they were shuttering the 2-D animation studios and moving into computer animation exclusively. Part of me is inclined to think they tanked this on purpose just to give them the excuse to do so. Or maybe the filmmakers saw the writing on the wall and just stopped caring. Regardless, it was a rotten time, and it’s not going to improve by much.

* No. I didn’t even want to think of it the first time.