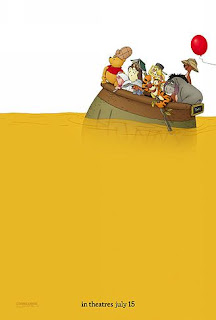 I can’t even tell you how much I love this movie. From the writing to the animation to the voices to the music, every single thing in this film hits exactly right. I have watched this movie more times this year than any other. Any time I finished a disappointing film, Winnie-the-Pooh was my palate cleanser. Part of this is due to its length - coming in just shy of an hour, it beats out Dumbo as the shortest movie in the canon. And even that’s not a problem, as the movie doesn’t feel short. It’s exactly the length it needs to be. It’s a very dialogue-heavy movie, which I have to imagine contributes to that. There’s barely a moment where either the characters or the narrator aren’t speaking, which gives the movie a wonderfully full feeling. It’s as densely-written as an episode of Gilmore Girls. And the moments when they do use quiet work all the better because of this. The writing is all very sharp, and nearly every joke lands. In fact, in lieu of my usual jokes, the photo captions here are just going to be movie quotes. And it is such a quotable movie. Look at this exchange, when everyone but Piglet is stuck in a pit:

Rabbit: Tie the bits of rope together, Piglet! Can you tie a knot?
Piglet: I cannot.
Rabbit: Ah, so you CAN knot.
Piglet: No. I cannot knot.
Rabbit: Not knot?
Pooh: Who's there?
Rabbit: Pooh!
Pooh: Pooh who?
Rabbit: No! Pooh... eh... Piglet, you'll need more than two knots.
Piglet: Not possible.
Owl: Ah, so it IS possible to knot those pieces.
Piglet: Not these pieces!
Pooh: Yes. Knot those pieces!
Piglet: Why not?
Eeyore: 'Cause it's all for naught.

That’s funny stuff, and sold perfectly by the actors. Obviously, Disney had been making Winnie-the-Pooh material for years in the time between the former movie and this one, including several TV series, and I was surprised initially to learn that they had largely recast the characters. I can’t argue the results, though. Jim Cummings was one of the two actors kept from the TV material, and he plays Pooh and Tigger better than he ever has before. I sometimes joke about how easy to pick out his voice is in these movies, but the guy knows the difference between bit parts and fast TV work and two lead roles in a movie, and he BRINGS IT. His Pooh is a bit more easygoing and less thoughtful than Holloway’s, and his Tigger’s more of a scrapper than Winchell’s, but there’s nothing wrong with a character growing alongside the actor. The other returning cast member is Travis Oates as Piglet, who was hired to play the part after the fairly recent death of John Fiedler. He’s got a somewhat more youthful voice, but that’s only to be expected, and works very well with Cummings.

Of the new voices, there’s three that could be considered “celebrities”. Well, one by general standards and two by my personal standards. The big star is Craig Ferguson as Owl. Ferguson plays up Owl’s scatterbrained nature, and runs a good deal more manic than Hal Smith did, which fits the rapid pace of the movie. Rabbit is played by voice acting superstar Tom Kenny, with the tones of a younger, more intellectual Ice King. Junius Matthews, you’ll recall, was one of the parts of the older film that didn’t really work for me, and Kenny is fantastic as always. Musician and voice actor Bud Luckey plays Eeyore, which is just too perfect. For those who can’t place the name, Luckey’s come to Disney through his many roles for Pixar, including Chuckles the Clown in Toy Story 3, which I know you’ve all seen. See? He’s PERFECT. Kanga, always a rather thankless part, is voiced by the film’s lyricist Kristin Anderson-Lopez, and she does a fine job. The child actors for Christopher Robin and Roo are also very good, and hey, C.R. finally has a British accent! And speaking of British accents, the narration duties are taken over this time by John Cleese. I don’t need to tell you what a great job he does, because he’s John freaking Cleese.


There is one other voice, which surprised me, and that’s Zooey Deschanel, who provides all the vocals for the interstitial music. I was initially expecting a modern version of the old Disney chorus, but having Deschanel provide the voice worked perfectly. Just as the running theme of Phil Collins’ voice gave a great spirit to Tarzan, so does Deschanel’s folksy singsong perfectly create the mood for this movie. The songs themselves, by Avenue Q co-creator Robert Lopez and his aforementioned wife, are uniformly excellent, blending old-school Sherman Bros. style with modern sensibilities.

The animation is also great. Due to Disney’s recent decision to focus on CG animation for the time being, this is the last we’ll see of Toon Boom for a while, and it does well. Obviously, in a movie like this, the focus is on the characters, and many of my favorite character animators got a chance to shine. Eric Goldberg lent his skill to Rabbit, a smaller and more restricted character for him than usual, but one he did excellently. Bruce Smith continued being an overachiever by animating Kanga, Roo, and Piglet. And Andreas Deja lent the fluidity of motion the so characterized his  classic villains to the more boisterous movement of Tigger, making him the MVA once again. Deja also did a sketchy sort of shading on Tigger’s stripes, which called to mind the character’s origins in the xerography age. A lot of the animators tried to emulate the “shaggy edges” of xerography at certain points, but with the slick and smooth Toon Boom animation, it just doesn’t work as well, and thankfully, they don’t try too much.


What a wonderful final movie to end our “year” with. And what a ridiculous shame it made such lousy money. Sure, it’s a small, character-driven comedy and not a big actiony blockbuster, so I wouldn’t expect it to break any records, but it’s Winnie-the-Pooh. The brand recognition on that name alone should have been enough to push it above 100 million with just the merest whiff of competent marketing. Instead, it made a feeble 33 million. Yeah, this movie had a 30 million dollar budget. That is tiny for any film, and if this had been a hit, we might have seen more small, affordable, and really good 2D animated features from the studio in the future. But it looks like big, action-packed CGI is the trend of the studio, and while Wreck-it Ralph was certainly enjoyable, it did leave me a bit leery of the next few years. Frozen looks like a mess at the moment, and Big Hero Six is such an easy property to mess up. And I’ll certainly come back to review those when the time comes. For now, though, the review portion of Volume 1 of the blog is over.

We’ve still got a little more of My “Year” With Walt Disney Animation Studios to go, though. The next couple of weeks will bring some supplementary entries handing out some awards to the top songs, villain songs (which has to be its own category, because come on,), and the best movies, as well as de-wards (or whatever) to the worst songs and worst movies. I will also be presenting a list of the hottest gentlemen of Disney, based off popular vote, and the hottest ladies, based off my own personal opinions. Then it’s on to Volume 2, which I have titled: “My Probably More Than A Year Without Walt Disney Animation Studios“. It’s gonna be good.

* As previously, we get a live-action opening in Christopher Robin’s room, which looks a lot more lived in now. The set decorators deserve a special Oscar for perfectly showing the room of a boy with a wide range of interests and a bubbling creativity. Over the end credits, we see still shots of the movie scenes as Christopher Robin was imagining them, enacted by the stuffed animals with makeshift props.

* There is one more voice in the movie I didn’t mention, and that’s national treasure Huell Howser in a post-credits scene I don’t want to ruin. Just definitely stay to the end, and don’t read the cast list when it pops up, or it’ll spoil it.

* Not that you really need prompting to stay through the end credits. Even after the live-action stills are done, the credit scroll is filled with all sorts of funny little animated vignettes involving the characters.


*  In addition to being an excuse to get the plot started, Eeyore’s tail forms a great running gag, as it is replaced with an unraveling scarf, a spring (for Tigger training), the Pooh-coo clock, an umbrella, and an anchor.

* It is also replaced at one point by a balloon, which the other chiropractors consistently refer to as if it were alive.

* Okay, my computer barely autocorrects anything, but somehow I seem to have put a typo in “characters” that resulted in “chiropractors”. But you know what? Since they’re fixing Eeyore’s tail, I’ll leave it in. It fits.

* One of the musical numbers is animated in a different style, a trick I always like. In this case, it’s chalk drawings as done by Owl on the small blackboard serving as Eeyore’s tail at the time.

* The gag of characters interacting with the text on the page is done even more this time around, and I love it.