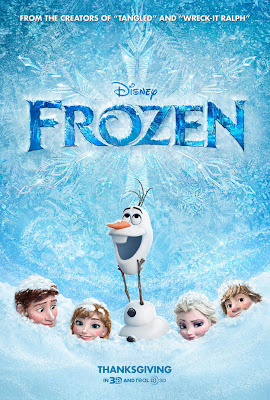 PLOT - The film is allegedly based on Hans Christian Andersen’s “The Snow Queen”. I say allegedly because The Snow Queen is about a peasant rescuing her brother from an evil, supernatural queen of ice and hatred, and Frozen is about a princess whose sister has magical ice powers and runs away after being crowned queen, so she has to go find her with the help of a hunky ice salesman.  Also, The Snow Queen in the book has a mirror that reveals the worst of everyone who looks into it, and when it shatters, shards of it land in the brother’s eyes, forcing him to only see the worst aspects of everyone he meets. In the movie, she has a Wacky Snowman Friend.

While I would have loved to see a movie closer to the book, or at least as close as The Little Mermaid, an Andersen adaptation which changed quite a lot, but at least kept vaguely the same shape as the story, this was still good. The relationship between the sisters was well-realized, and there was a neat subversion of the old Disney “love at first sight” bit, and we all know how much I love that. Part of the story didn’t work for me, but I don’t want to spoil, so I’ll just say the thing that was the thing probably should have been another thing than the thing it turned out to be, which was a bit too simple. Also the trolls were kind of lame.

ACTING AND CHARACTERS - The main royal types were played by Kristen Bell and Idina Menzel, who both did predictably excellent jobs. Bell acted much as she did in Reefer Madness, selling the Disney brand of pseudo-oblivious optimism sincerely, rather than parodically, as she did in that movie. Menzel excellently communicated the fear and confidence of her character, and the conflict between the two. She doesn’t sound even close to 18, though. I have no idea how old she is, but I assume everyone from the original cast of Rent is 50 or so. And based on how craggy Anthony Rapp looked on Psych last week, I may be right.

Lots of Broadway people and character actors in the rest of the cast, always a good thing. Wacky Snowman Friend is played by Josh Gad, who I guess is doing all the stuff Dan Fogler doesn’t do any more now that he’s big enough to be on Hannibal. He does a good job, though, and puts a lot of charm into a character that would otherwise have annoyed me. The male leads are kind of bland, but they, too, are carried by the actors, Jonathan Groff and Santino Fontana. (Fontana, incidentally, is the non-mustached guy in the greatest online video ever. There are five parts. Watch all of them.) Ciarán Hinds is the king of the trolls, and does predictably well as the leader of a gang of shaggy mountain hoboes. Alan Tudyk, as in Wreck-it Ralph, plays a sinister nobleman while using an unrecognizable voice. The character is underused, but that relates to the thing I mentioned before about the thing, so I won’t go into it any more.

ANIMATION - The one area that gets almost unreserved praise from me. I say almost because the main character designs are kind of uninspired. I mean, they’re attractive enough, band appealing enough, but everyone looks like a first draft. And Anna looks pretty much exactly like Rapunzel. The supporting characters, though, look great, and more importantly, so does the setting. When the Snow Queen accepts her powers and starts instinctively using them, she creates a huge ice palace from nothing in a really spectacular scene, and the rest of the movie is all snow and ice and giant snow golems and races across frozen oceans. It’s really spectacular.

MUSIC - Again, not so good as the sum of its parts. I was excited to see Kristen Anderson-Lopez and Robert Lopez in the opening credits after their work on Winnie-the-Pooh. And yes, the songs are quite good, generally. The opening number is good setting-establishy stuff; the second song “Do You Wanna Build a Snowman”, is a fun and quite touching song developing the growing distance between the sisters; and the big breakout number, “Let it Go”, may well unseat “Defying Gravity” as Idina Menzel’s signature.

There are a few others that I recall as working well, and a few that I recall existing, though I can’t recall a single other thing about them. The trouble the soundtrack runs into is a complete disconnect with the tones and styles of the various songs. Unlike Hercules, where there was a defining style throughout the movie, or The Princess and the Frog, where there was a theme of deep South style, these songs don’t really sound like they belong to the same movie. And as a friend on Facebook pointed out, it’s a bit odd to cast a Broadway/Glee star like Jonathan Groff and then only give him one little 50-second song.

CONCLUSION - Go see it. Despite the fact that it doesn’t hang together very well, it’s still quite an enjoyable time, and I can easily see how the pieces might arrange themselves together a bit better if placed on someone else’s mental shelf. So give it a shot. I may not be rewatching it any time soon, but I did enjoy myself.
Posted by Brian Lynch at 12:54 PM