IT’S FREAKING DON BLUTH TIME WOOOOOOOO. You all remember Don Bluth, right? The scrappy go-getter that started working at Disney as an animator, and decided to strike out on his own when he realized Disney was mostly making garbage anymore? Well, after scraping together the cash and resources to make the short “Banjo the Woodpile Cat”, Bluth and his partners were able to interest folks enough to get funding for a feature length production. The pressure was intense, with the former animators ready to take on the Mouse with… well, a mouse. Stick with what you know, I guess.

MAGIC FOR SOME REASON! 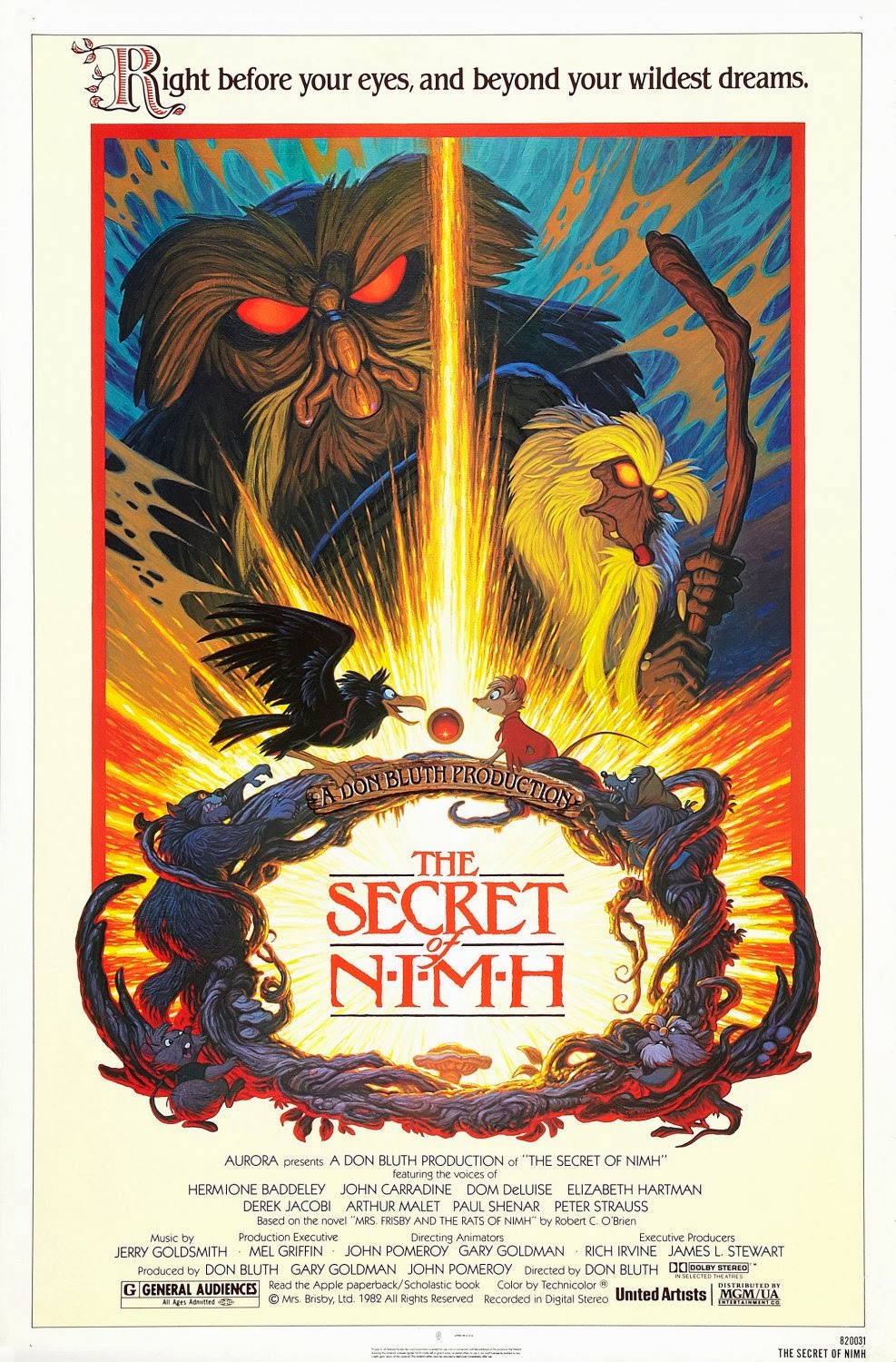 The Secret of N.I.M.H. is a difficult movie to review for me, because I can’t shake the feeling that I really shouldn’t like it. Not because it’s a bad movie at all. Far from it, it’s very good. But if you’ve been reading this blog, you know my complex feelings toward adaptations, and how weird I find it when a movie adapts a book and completely ignores important aspects of it. And this movie takes one of my favorite books, Mrs. Frisby and the Rats of N.I.M.H., and smashes its essential premise into the ground, grinding it under its heel, all in the name of proving that feelings and magic are better than science and that there are clear heroes and villains in the world.

Look, if you haven’t seen it or read the book, I’m going to spoil a bit here. And you know I only give spoiler warnings for old movies if I think they’re particularly good, so keep that in mind as you read this next bit. I LIKE THIS MOVIE. THIS IS NOT ANOTHER SPACE JAM SITUATION WHERE EVERONE HAS TO HATE ME. The story revolves around Mrs. Frisby (changed to Brisby in the movie to avoid a  lawsuit from Wham-O), an ordinary field mouse who needs to move her family out of the field, as it is being plowed, but her son has pneumonia, and can’t travel. So she seeks out the assistance of some rats who live near her home. These rats, as it turns out, have enormously increased intelligence as a result of being the subject of genetic experimentation at the National Institute of Mental Health, or N.I.M.H. They are initially reluctant to help her, as they are in the middle of a plan to move their society to a secluded valley and stop stealing electricity from the farmer, but when they find out she’s the widow of Jonathan Frisby, they agree to help her. Through this, Mrs. Frisby learns that her husband was subjected to the same experiments, and was instrumental in helping the rats escape from N.I.M.H. He continued to help them in secret, until he was finally killed by the farmer’s cat while trying to drug it, a task that now falls to Mrs. Frisby.


The point that’s made over and over is that the rats are a product of science, and as such, largely unconnected to the world around them. They can’t live off the humans, nor can they truly be happy with the animals. The spirit of scientific inquiry is strong in them, and the ones we meet use technology and science in creative and original ways. There had been a conflict in the rat community between Jenner, a rat that thought they could get on fine relying on humans, and Nicodemus, the gruff mechanic that wanted them to move on and become independent. And in those characters we find the two huge changes in the film.

The first, an increased role for Jenner, is not that bad. Jenner only appears in flashbacks in the book. After his argument with Nicodemus, he takes his supporters with him and they are later found dead, which nearly exposes the rat community. In the movie, this conflict is moved to the present, with Jenner taking on a far more villainous role, attempting a hostile coup and killing Nicodemus in the process. I actually have no problem with this. The book’s plot, wonderful as it is, is separated into three distinct sections, and while the middle - the time at N.I.M.H. and the events following their breakout - is the most interesting, it’s also a very slow burn. Moving Jenner to the main plot adds a nice layer of conflict, and making him more of a villain is a necessary side effect of that.


The other change I feel more conflicted about, and that is the addition of magical elements. Nicodemus, in the book an eyepatch-wearing badass and active leader, is in the film a wizard. Like with a long beard and glowing eyes and a crystal ball and crazy wizard fingernails. And rather than lifting and moving Mrs. Brisby’s house with ingenuity, it’s done with a magical amulet. You may wonder how these magical powers and objects came to be. And well you might. Because the movie never bothered to explain it. And what’s more irritating is that it seems to delight in not explaining, taking a really smug “ah, there are things in the world which science can’t explain” tone, and I just freaking hate that.

The reason the sections at N.I.M.H. are the most interesting parts of the book, and a major part of what makes the book one of my favorites, is the science of it all. The rats are given injections and treatments, but there’s also tests and mazes, analysis of continuing and increasing results, and an actual (successful) effort to teach the rats how to read. They even have a control group! When was the last time you saw a group of fictional scientists with a control group? But in the movie, this solid scientific grounding is abandoned, with the message that you have to trust your heart and accept that science will never give you answers in its place. And true to that moral, they never explain anything. Why did Mr. Brisby have a magical amulet? How did Nicodemus get his powers? No answers, no explanations, don’t question it. The story of their escape from N.I.M.H. is pretty much the same, so why all of a sudden are they sorcerers? It doesn’t make any sense and it weakens the story.

And yet, I can’t be too angry at the film for making these choices because it’s EXTREMELY good. Bluth’s directorial style has such a gift for tone, pacing, and character that all of these weird changes and plot holes don’t matter even the tiniest bit while you’re actually watching the film. It’s not perfect. A lot of the dialogue is clunky and the story is occasionally slow or stilted, but the movie as a whole works wonderfully.

The main credit, of course, goes to Bluth as a director and animator. The movie looks amazing. The underground chamber of the rats, the desiccated tree where the Great Owl makes his home, the sprawling workshop of mouse scientist Mr. Ages, all beautiful settings used to great advantage. Bluth indulges his style in enormous set pieces, like an action packed race over a rampaging tractor or the pseudo-psychedelic experience at N.I.M.H., where he really gets to show off his tricks. For the first film from an animator-driven studio, the Bluth Group really earned their laurels, and it’s no surprise that they were able to interest investors for their future work.

The voices, for the most part, match the animation in quality. Elizabeth Hartman as Mrs. Brisby puts a lot of life into a mostly reactive character, which is good, because the rats are largely pretty dull. Jenner is pure 80s cartoon bad guy, and his heroic opposite, Justin. Neither actor is a name, and neither brings much, but they’re both fine. The supporting cast, however, is fantastic. Dom DeLuise plays Jeremy the crow with the distracted high energy that would make him a Bluth regular. John Carradine brings all his formidable menace and horror movie zeal to the terrifying Great Owl. And while I disagree with the portrayal of Nicodemus as an old wizard, Derek Jacobi was the right choice if they were going to play it that way.


So yeah, a really good movie, just one that I have an odd relationship with due to my fondness for the book. But the rest of Bluth’s filmography gives me a bit more meat to work with, and that should be good as we continue on. Sorry about the hiatus, but you may recall last year at around this time, I got a new job that ate up all my time and energy? Well, I’ve got it again, only this time I’m making enough extra to reduce my hours at the OTHER job, so we should be getting back on a regular update schedule here. Let’s Bluth it up, folks.


ADDITIONAL THOUGHTS
* Field mice are technically voles, not mice. There is technically no way Jonathan, a lab mouse, could have bred with Mrs. B. Well, let’s just say it’s a side effect of N.I.M.H.’s tinkering.

* The decision to change Mrs. Frisby’s name came after the voices were recorded, and John Carradine was unavailable to record his new lines, so they just took a “B” from another line he said and looped it over. Very successfully, too. There’s maybe one line where I can tell, and the rest are pretty seamless.

* To apologize for this review being both late and short, please enjoy this image macro I found whilst looking up Cats Don't Dance screencaps. Really let it sink in. Speculate on the mental state of the person who made it. Then weep for humanity. 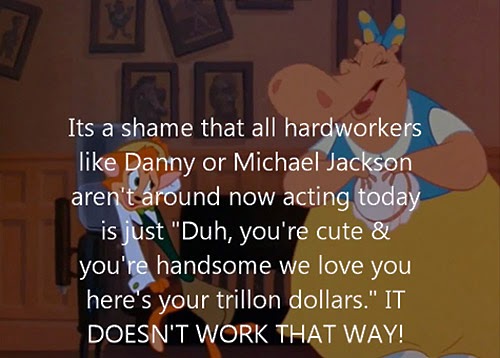