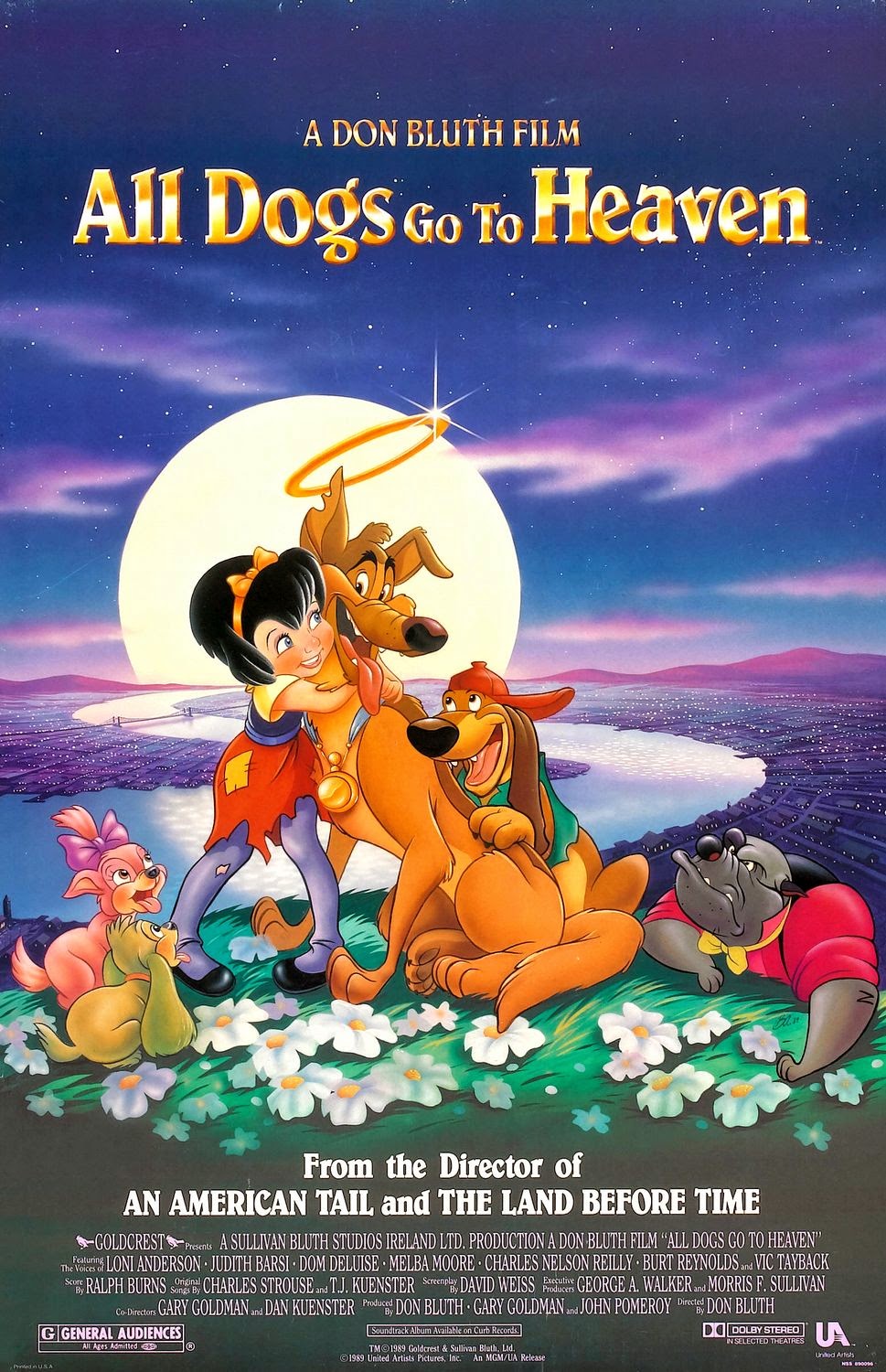 Longtime readers of this blog know that among my many weird problems is an inability to accept parallel animal societies. Well, that’s not entirely true, I’m fine with them if the humans are aware of the societies, or if there’s an explanation for it, or if the society makes more than a cursory attempt to remain secret, but if there’s a blatantly insane one, like mice wearing clothing with signs posted in the UN or throwing elaborate bon voyage parties at busy docks, I can’t handle it.

So who knows why I don’t have a problem with this movie? The dogs wear vests and neckties. drink from toilets, but they can tie neckties. I have two reasonably intelligent brothers that still can’t tie neckties, and they drink out of glasses and everything. The dogs have a CASINO. With, like gambling tables and a rat racetrack. But it’s in a junkyard. But it’s got full electricity, and dog-targeted neon signs. There’s a little girl who can talk to animals, and it’s clear this time that she’s unusual in that respect. So why do the dogs have all this? What’s the point in them having money if they sleep in abandoned cars and whatnot?


For some reason, I know not what, this film finally hit the right tone where I am able to just accept that. I think a lot of that has to do with the lead character. Rather than the earnest family types of the past Bluth oeuvre, Charlie B. Barkin is kind of a scumbag. He’s a gambler, a con artist, and a thief, and when he becomes a liability to his business associate, he gets killed. Literally killed. The movie does not shy away from that.

Once killed, he steals his now-spent soul from Heaven (where he went despite being awful because he is a dog, and - well, you read the title.) and returns to life. Is it for some noble cause, perhaps to save a life or make amends for his misdeeds? Nope, it’s a combination of not wanting to be dead and wanting revenge on the guy who killed him, a bulldog named Carface. When he finds out Carface has imprisoned an orphan girl who can speak to animals, and is using this ability to rig rat races, he rescues her... so he can use her in the exact same way. Also to steal stuff. He only comes around to the good side with great reluctance and with legit character development, which earns him a return to heaven. As an occasionally cranky atheist, I can’t help but love a movie where someone rejects heaven for being boring, and refuses to let himself be saved by grace. Charlie has to return to earth because he hasn’t earned heaven. And what gets him there in the end is caring for the life of another at the expense of his own, and abandoning heaven’s rules to do so. Damned by dogma, saved by humanism. I love it.


The animation is stellar. Bluth has grown more comfortable with things like xerography, rotoscoping, and computer assistance, and all are used to great effect. He worked on some video games around this time, and I’d bet they helped him see these tools as assets rather than liabilities. The dog characters show his gift for expressive character design, though the humans are a bit dull. But then, they always are. With a modern setting - or at least semi-modern, it seems to be sort of loosely set in the late 1930s for no reason other than style - Bluth is once again free to indulge his favorite quirks. Luxurious cigar smoking, innocent-type upskirt shots, big piles of junk, and the sparkles. OH, SUCH SPARKLES. The afterlife setting really gives him an excuse to go nuts with the sparkles, and boy does he use it. There’s also an extended (maybe a bit too extended) sequence where Charlie has a vision of his future in hell, which contains wonderful amounts of monsters and lava and smoke and all that good stuff.

Acting-wise, the movie was really solid. I was glad to hear the neurotic and frantic tones of Dom DeLuise again. While I’m pretty sure I made up the fact that he didn’t get into the last movie because Bluth was angry with him for doing a Disney flick, but in my imaginary world, he was brought back into the Bluth fold by Burt Reynolds. The two were best friends throughout their entire careers and appeared in six movies together. They were even afforded the privilege of recording their lines in the same booth, which was incredibly rare at the time. The two of them also ad-libbed extensively, playing off each other and using their impressive improv skills to improve the script. Bluth was so happy with the results that he had the villainous pair, played by Vic Tayback and Charles Nelson Reilly, also record together. It’s now common to have actors record together, and this was one of the trailblazers there.


Apart from the nifty behind the scenes stuff, the performances are really good. Bluth’s gift for casting continues unabated. Reynolds and DeLuise can’t sing hardly at all, but their comedic talents and camaraderie carry them through, and their songs are written to suit what are charitably called “character voices”. Reynolds is very much in his element as the sleazy charmer, a role he’s always excelled at. And DeLuise, an amazing actor who was somewhat held back by his physical appearance and goofy voice, gives one of the best performances of his career. Tayback is predictably good as the brutish bulldog, and Rielly gets to play a little meaner and more spiteful than his usual goofs. Loni Anderson, who was married to Reynolds at the time, plays Charlie’s girlfriend, but she’s good enough that it doesn’t just seem like stunt casting. Judith Barsi plays the orphan girl, and if you thought it was tough to hear her as a chipper little dinosaur, hearing her as an emotionally abused child is even tougher. She gives a dynamite performance, though. And Broadway star Ken Page appears as King Gator. OH YEAH, THAT.

Sometimes there is a scene that just needs to be mentioned, and this is deeeeeffffffinitely one of those. I mentioned earlier that for once, I didn’t have a problem with the “animal world”, for whatever reason. Maybe it’s because it was so played up, maybe I’m just used to it by now, who knows. But there’s one moment in the film where Charlie falls into the sewer and is set upon by King Gator, who is a gigantic, Cajun-accented, vaguely effeminate alligator with a bone through his nose. He is impressed by Charlie’s singing (yeah, right) and sings a song called “Let’s Make Music Together”. Then Charlie leaves. Then nobody talks about it for most of the movie.

This was the scene that prompted film critic Lindsay Ellis to coin the term “Big Lipped Alligator Moment”, referring to scenes in movies, often animated ones, where something comes out of nowhere, creates a ludicrous and tonally inconsistent spectacle, and disappears, never to be mentioned again. King Gator is not a flawless example of a B.L.A.M., as he does put in one brief appearance in the climax, sinking a boat and eating Carface, but it was really unnecessary, totally out of place, and has that slight veneer of racism and homophobia so common in 80s kids’ movies that really makes it sit badly.

But apart from that one bit of blatant insanity, the rest of the film is comprised mostly of a subtler, more charming insanity. It doesn’t always make much sense, but it doesn’t have to. It’s Bluth’s best movie, and it’s the one where he finally figured out the secret formula that makes the insane work in concert with the story, instead of hindering it.

Don’t get used to that.

* I may like the character, but Charlie B. Barkin is a terrible name.

* You may have noticed I didn’t mention the songs hardly at all. There’s a reason for that. They’re awful.

* In the direct-to-video sequels, Charlie is voiced by Charlie Sheen, then Steven Weber. Talk about diminishing returns. * Continuing my theme of "insane things I found while researching this", I invite you to try and make sense of this YouTube video. I don't know, maybe it's some kind of Tumblr thing. And you can hear Reynolds and DeLuise "singing", and a touch of that old casual racism.
Posted by The blogger at 6:13 PM