MEANWHILE, IN THE PAST…

All right, so Dumbo made big bank, and Disney was now free to go for higher pursuits. Walt had long been enamored with the German nature novel “Bambi: A Life in the Forest”, and after several attempts by other studios to make a live-action version, had acquired the rights. Was the world ready for an artistic, environmental film with no humans in it? Would children be as interested in animal mating as the filmmakers were? What the heck gender is Flower? And how was anyone planning to do this in live action? Twitterpated? So am I. So grill up a venison steak, you heartless monster, and let’s talk about Bambi. 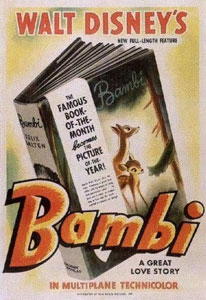 Ohhhh man, I missed Disney with a budget. This movie is gorgeous, with lush backgrounds and amazing animation on things like falling leaves and moving water. The animal animation is more realistic and fluid than It’s anything they’d done before, and while the styles are a bit inconsistent between animalistic and cartoonish, they always look great. I can’t overstate this, the look is fantastic. So fantastic, in fact, that they really feel the need to show it off. For a long long long time. The opening pan is about 7 minutes long. Breaks from the plot to show the forest in its usual course are frequent and lengthy. I don’t really mind, though, which surprised me. The movie’s not really about the plot, or even about Bambi. It’s about nature in general.

There are only three characters besides Bambi, and his family (Fambli?), and they are weird. There’s the absurdly-named Friend Owl, a wise yet cranky old man with TERRIFYING yellow eyes. Then there’s Flower, a skunk who is… Okay, I did not have a single earthly clue whether Flower was a boy or girl until they all grew up and got new voices in the last act. He’s always batting his long eyelashes and playing with flowers and making movements that can only be described as “flirty”. But he’s still the first one to get a special ladyfriend after they grow up, so he’s doing something right.


The third is Bambi’s best friend Thumper, a rabbit. Thumper is introduced early on, making fun of Bambi for not knowing anything mere hours after his birth. This, along with Bambi’s extremely vague title of “prince of the forest” led me and my sister to assume Thumper is a staunch anti-royalist and advocate of the rights of man. Turns out the movie’s far more entertaining when Thumper’s constantly saying, in his cute little baby voice, “You think you’we supewior because of your social cwass, but the pwoletawiat shall wise up!” I guess they became friends when he figured out that “Prince” didn’t mean anything.

Okay, I know what you want me to talk about. If there’s one thing this movie’s known for, it’s the childhood-scarring death of Bambi’s mom. I hate to tell you, but it didn’t really hit me. Maybe I just saw it coming. After all, this is a common knowledge spoiler, like how Rosebud was Kane’s sled, or it was Earth all along. But I think it might just be that I’m too old, and not easily affected  by cute animals. And that’s a problem I kept running into. I try to be fair with these and put them in their proper cultural perspective, so when the entire point is “Look at the cute animals”, I don’t think I can give you the entire experience. In this case, I really do need a kid’s view.


Now I don’t have a kid. What I do have is my younger sister Katie. And while she is, on the surface, a smart, capable, and professional 23-year-old woman, she also has epically low standards for movies and a love of adorable fuzzy animals that rivals Lisa Frank herself. Put those two together, and you’ve got an eight-year-old girl where film is concerned. So how did she like it?

Well, pretty much the same as I did. Sure, she was more inclined to gush over the admittedly adorable animals, and found things like Bambi learning to walk or sliding on ice far more fascinating than I did, her general impression was the same as mine. The animation was beautiful but occasionally tedious, the dialogue was peppy but uneven, and Thumper the Wevolutionawy Wabbit was hilarious. So I guess in the case of this movie, the charms are the same for a 28-year-old male geek and a 8-year-old basket case. Good to know. I’ll probably have to get her opinions again when I get into the princesses.


I guess I can’t shake the feeling that this movie wasn’t very good, regardless of how much I enjoyed it. As has been the case for the past several films, the story has little cohesion from scene to scene, the characters and dialogue are very thin, and the music is poorly integrated and mostly terrible. And they’re running as thin as they can on the “experimenting with a new art form” excuse. This one once again didn’t do so well. People weren’t taken with the realistic animals, and hunters went on the attack against it. But on a rerelease in 1947, the post-war era found it far more to their liking, and they made their money back.

This takes us out of the Golden Age. Next week we start the anthologies (EDIT: sort of.) and at least they aren’t supposed to be cohesive. Whether that’s a good or bad thing, we’ll see. Hopefully when the features start again, they’ll have pulled it together.

* Everyone knows the word ‘gay’ primarily used to mean ‘happy’, but I think deep down we all thought of this as an archaic use even by the 40s. But they really do say it a lot in these movies. And I know that laughing at that is juvenile, but when they say “Let’s sing a gay little spring song”, what am I supposed to do? I’m not made of stone, people.

* Speaking of that song, it follows the death of Bambi’s mom immediately. I mean, I get the impulse to soothe us somehow, but to skip right from the death of the mom to happy little birdies and flutes-a-trillin’ and tweet-deedle-ee-tweet-deedle-ees.

* Of course, given that Bambi’s mom isn’t mentioned again after the death scene, maybe the film’s just in denial.

* I mentioned this before, but really, in what way is Bambi the prince of anything? No one shows him any deference, he has no authority, and no responsibilities. And if he’s ‘the prince’, and the big guy is ‘the great prince’, then how did they expect us to be surprised that it’s his dad?

* At one point, Bambi and his lady, Faline, are getting reacquainted as grown-ups when another buck (whose name, according to the Wiki, is “Ronno”,) shows up and starts pushing her into the woods against her protests. Then Bambi beats the tar out of him and throws him off a cliff. Which makes this the first, possibly only Disney film in which the hero prevents a rape.


* At the end, Faline gives birth to twins. I didn’t think deer could do that, but apparently they can. Anyway, Bambi abandons her, just like his dad. What a class act.

* No, Ronno was never seen before or mentioned again. That would connect the scenes together, silly.
Posted by Brian Lynch at 10:49 PM