Well, what with the success (both political and financial,) of Saludos Amigos, Disney decided to stick with a winning formula for their next film and make another South American travelogue. With more confidence, more money, and less direct government influence, this one would be less blatantly propagandistic, have a more cohesive plot, and actually be something like a real feature length. I never thought I’d think those were bad things. Sintiendo una conexión más profunda con nuestros vecinos del Sur? También estoy. Así que algunos burritos y margaritas, y vamos a hablar de Los Tres Caballeros. 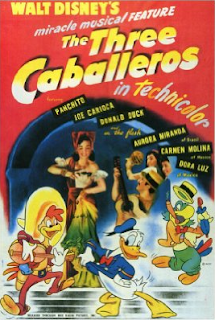 So we start with that laziest of all anthology film setups: Donald Duck gets some presents, including 3 home movies. The first is about a penguin who hates the cold, and is just tired gag after tired gag, with some half-hearted geography thrown in. Oh, and Roman mythology, because why not. If this one was narrated by the usual guy instead of our special guest, the delightful Sterling Holloway, I would have shot my TV, Elvis-style. The second describes many real and unusual birds, and one fictional and annoying bird. And the third is about a young gaucho who befriends a flying donkey named Burrito. (Which sounds a little racist, but remember, it does mean ‘little donkey’.) This does feature the regular narrator talking in a horrible phony accent. And the narration keeps switching between rhyming and prose, and between the narrator being an older gaucho reminiscing, and a 3rd person-type who can speak directly to the kid. It’s sloppy and badly done and unfunny. 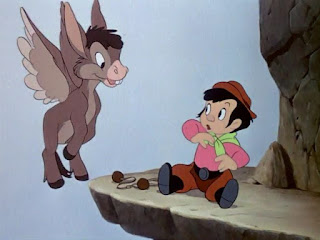 And from there we meet Panchito Pistoles, our Mexican representative, who is loud and likes shooting his guns into the air. Ahem. They sing an absurdly catchy song, and then learn about the piñata, which Pancho oddly calls “the very spirit of Christmas”. Sticking with this holiday (?) theme, we learn about las Posadas, which seems awfully religious for a mainstream release, but it is culturally important, and hey, 1940s. 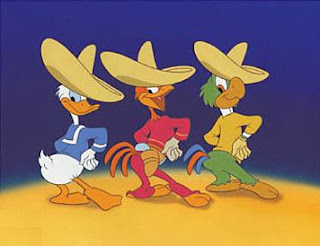 And the rest of the movie is just another folk dance, some more crazy hallucinations, and Donald hitting on human women. Seriously, that’s it. At first there’s some semblance of story left over, with the guys flying around on a serape, magic carpet-style, chasing ladies on the beach or whatever. But then it just descends into a Technicolor acid nightmare, all severed heads, sexy cactuses, random shapes, and the birds dancing with human female legs. It makes Pink Elephants on Parade look like Steamboat Willie.

* Oh, you expected an ending to the main review? WELL I EXPECTED AN ENDING TO THE MOVIE. After the screaming insanity sequence, there’s just a few seconds of fireworks and the movie’s over.

* So yeah, their attempts to make it more commercial mostly worked to its detriment. It was far more stretched out, and without the live action documentary between-shorts bits, became less educational and more cartoony. A third feature, focusing on Cuba, was planned, but unmade. Nonetheless, Disney had found the crowd-pleasing, budget-saving shorts technique that would see him through the war and post-war years. 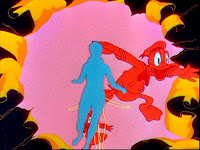 * Did I just do an ending to the main review? Dang.

* Hey! All the voice actors got credits! Good for you, Clarence Nash!

* This guy shows up during the Aurora Miranda number, and is just plain awesome. He’s making percussion by tapping a stick on his teeth. Who needs fancy instruments?