So after the bonkers success of Cinderella, it was time for Walt to return to his two favorite pastimes: Fulfilling his lifelong goals and making unprofitable movies. See, Walt had always loved the Alice stories of Lewis Carroll. His early work in Hollywood included a series of silent live action-animation hybrids dubbed “The Alice Comedies”, which took inspiration from the books. In the mid-30s, he had intended to produce a full-length Technicolor version of those, going so far as to do screen tests with Mary Pickford as Alice. So why did they settle on Snow White instead? Why did he spend 12 years developing Alice before it finally saw release? Well, the books are essentially unfilmable. They’re meandering, mostly plotless, unashamedly weird works based on logic puzzles and literary wordplay, and the main character has absolutely no arc or dramatic through line. But ol’ Uncle Walter was convinced he could make it work. Wary? So am I. So eat and drink anything that suggests that you do, and let’s talk about Alice in Wonderland. 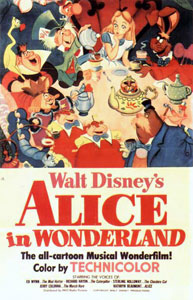 Okay, this is the post were I get in trouble with my roommate, who I believe counts this as her absolute favorite movie for ever and ever for all time infinity. First of all, let me say that in regards to the essential unfilmability of the books, you can read this entry on my mostly-disused general purposes blog. (Warning: My language tends to run a mite saucier on the other page.) The upshot is this: Film is different than literature, and  has different needs. A book which consists almost entirely of one unconnected scene after another will not necessarily adapt to film well without a lot of work. And that work is not in evidence here.

I’m not going to do a lot of comparing to the book, because I don’t really like those kinds of reviews. I got that out of my system with Pinocchio. But it’s essential to understanding why this film fails on a narrative level. Carroll put his scenes in a very precise order, and in two separate books, the second of which was very specifically chess-themed. Taking them out of that order and smooshing them together kills the flow. Characters are combined and abandoned, the original, lyrical dialogue is mixed willy-nilly with insipid new dialogue, and the songs… Ohhhhhh the songs.

This movie technically has more songs in it than any other Disney film, but that ‘technically’ comes with a big ol’ asterisk. Plenty of them are only a few lines long, or sung in the background. And those are, of course (I swear I’m not trying to keep harping on this,) the ones that are taken from Lewis Carroll poems. The Cheshire Cat sings the first verse of “Jabberwocky” over and over with no context or conclusion. Tweedle Dee and Tweedle Dum sing the first two verses of the eight-verse “Father William” in the background as Alice walks away. Of the Carroll-inspired numbers, only “The Walrus and the Carpenter makes it through relatively unscathed, and even then it’s broken up with poor delivery, lousy pacing, and added non-poetic dialogue, just as “Casey at the Bat” was. The non-Carroll-based songs, on the other hand, are not even worth mentioning.
I’m not saying there’s nothing good in it. The animation is nice and clean, even if it lacks the scope of Cinderella. The designs are imaginative and alive, and depart wildly from the books, which is a change I actually like. The Tenniel illustrations are inextricably connected to the book, but any attempt to simply recreate them would be doomed to fail. As it is, the animated characters are some of the most vivid and entertaining the company has done. The voice acting is also top-notch. Young Katherine Beaumont does very well with the thin material she’s given as Alice, and celebrity guest Ed Wynn’s Mad Hatter voice is justifiably iconic. And in case you weren’t sure this was a Disney film, Sterling Holloway is back, this time as the Cheshire Cat. He’s fantastic as always, weird and funny while still being a little spooky.

I’m not saying this is a bad film; It’s not. There’s plenty of good times to be had. And I’m not trying to say that it should have been more like the book. It couldn’t have been. Trying to adapt this book is a fruitless endeavor. There’s a book called “The Life and Opinions of Tristram Shandy, Gentleman” that has often been called unfilmable. The only way a movie ever got made was a fake documentary about people trying and failing to make a movie of it. Maybe that’s what Alice needs. I don’t know. All I know is this left me cold. I didn’t dislike it as such, I just kept getting bored.


So if you like the movie, great. I completely understand. But for me, story is king, and the story just isn’t here. I’ve complemented Disney before, and I will again, for their ability to wring a feature length story out of not a lot of plot. But it seems like too much plot gives them the opposite problem.

* Mary Pickford was 40 when she did those screen tests, by the way.

* Also on my general blog: Here’s where I discuss “alternative” versions of Alice, and here‘s where I led into it by talking about the Tim Burton version. I never did finish the series, because the Burton version turned out to be a sequel rather than an adaptation, as we had been led at the time to believe, and thus didn't really fit the form. Review:  It was okay?

* This was sort of a disappointing way to come back from hiatus, eh? Well, there's just not that much to say about this one. It's okay, but I wasn't wowed. I bear it no animosity, nor do I wish to sing its praises. Stick around, though. The next one, I bear a huge roarload of animosity, and the one after that is eminently praiseworthy.

* There is one non-Carroll derived song worth mentioning, and that is the title song, carrying on the bold tradition of being played over the opening credits and being horrible. The reason this is worth mentioning is that it is both the last of these title songs, and by far the worst. So... good for them?

* This film did eventually make its money back on rerelease, as have so many of the films we've discussed here. This particular release was a long time coming, due to the disappointing performance of the initial run, and didn't make it back to theaters until 1974. Now, I'm not going to imply it had anything to do with any 70s recreational habit of ingesting certain substances and going to the movies, but look at this actual official poster and tell me what you think the Disney marketing people thought.