Well, as I said last time, Walt’s ambition was at a peak. He wanted to go back to traditional fairy tales, and he wanted to go BIG. This movie spent four years in development, involved more detailed character design and background painting than ever before, utilized a new stylized form of design, was filmed in the INSANELY wide Technirama format. It was nominally an adaptation of Perrault’s “La Belle et la Bois Dormant” (The Beauty Asleep in the Woods) but also with a healthy dose of the Grimms’ “Briar Rose”. The pre-release publicity was huge, on TV and in print. Biggest of all, the newly-built Disney Land made the Sleeping Beauty castle its centerpiece, complete with mosaics depicting scenes from the film that was still TWO YEARS off. So was it a success? Well… That’s a big question. Inquiry to your emotive state? Assertion of agreement. Suggestion of food and let’s talk about Sleeping Beauty. 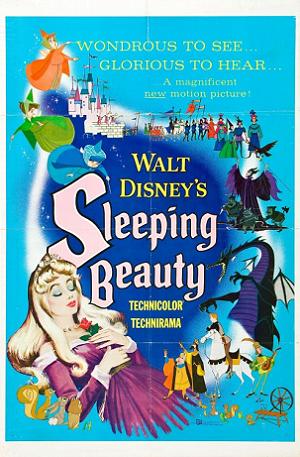 I loved it. The angular, stylized characters and lushly painted backgrounds look amazing, the film is really a technical wonder. From the loose design idea of making the whole thing look like a medieval tapestry, the company made one of their most visually striking films ever, even to this day. The music was composed by freaking Tchaikovsky, for Pete’s sake! I mean, okay, they adapted it from his ballet, but still, that’s ambitious. Even the songs are Tchaikovsky numbers with lyrics.

The film certainly carries the Disney tradition of sealing up plot holes and making fairy tales a lot more solid, but in a bit of a roundabout way. Where they usually have to expand the plot, here they have to contract it, as the Perrault version is a rampaging mess of ancient curses, and 13 fairies, and dwarfs, and seven-league boots, and the Prince’s half-ogre mother who tries to eat her grandchildren. Disney used the Grimm version of the tale as a story frame and cut it down to the basic essence of the story, then reexpanded from there.


Characters are also excellent again, clearly taking influence from past fairy tale movies. Like Snow White and Cinderella, Princess Aurora starts out poor and honest, only rather than being forced into servitude by cruel step-relations, she actually believes herself to be the peasant Briar Rose. This makes her come off a lot more well-adjusted, though she and her love interest still utterly lack charisma or personality. Again, though, Disney uses their old tricks to make them slightly interesting. Like in Snow White, they actually meet and have a conversation before he wakes her from her magic sleep, and like in Cinderella, they have no idea who each other are. In fact, it’s even better, as she thinks he’s a commoner, and he thinks she is as well. But he KNOWS he’s a prince, and KNOWS he’s expected to marry a woman he’s (supposedly) never met, and is willing to give that away for Briar Rose. It’s far more compelling and makes the couple the most likeable human pair I’ve seen, even if they function less as people and more as an excuse for the plot to happen. Their fathers are also fun, in that bumbling Disney dad sort of way.


The fairies, however are FANTASTIC. Walt’s initial impression was that there should be seven identical fairies, but his animators thought better and created three very distinct ones; bossy Flora, ditzy Fauna, and sensible, put-upon Merryweather. The three are wonderfully realized and developed characters, and it’s often said that they are the actual protagonists of the story. The prince wouldn’t have been able to do squat if they hadn’t rescued him from the dungeon, given him weapons, and magicked away every obstacle he came across. I will say that when we see the three of them trying to do housework, they’re so inept at it, it’s a wonder the kid made it to see her first birthday, let alone her 16th.

The evil fairy, Maleficent, is magnificent. She has maybe the worst motivation for a villain ever (for not being invited to a baby’s birthday, she resolves to kill the kid,) but they make up for it by making her awesome. Her look is fantastic, with green skin and giant horns and a raven always lurking about. And when she captures the prince, she doesn’t threaten to kill him, but plans to keep him alive until he’s a withered old man, and then set him free to go and wake the princess, a lifetime too late to be with her. That is some EVIL right there, and the images she projects of the decrepit future prince are really heartrending. After a string of buffoons and monsters, it’s great to see a villain who’s truly malevolent.


So how did it do? Well, it was the second most successful movie of the year, and was such a flop it almost closed Disney’s animation department. That probably seems incongruous. See, here’s the thing: All that creative innovation, the lush backgrounds, the detailed character animation, the Technirama, that stuff all costs a LOT of money. This movie cost more than twice as much as any they’d done before, and with four years of no animated releases and a successful venture into television and live action films, a movie that makes back just a hint over budget isn’t looking like such a great use of almost half a decade. Fortunately, something came along that made the whole process seem a bit more sensible. But we’ll get to that.

* On its theatrical release, this was packaged with a live-action short called Grand Canyon, which won the Academy Award. I feel like I should review it, but it’s like a half hour, and I’m super lazy. They included it on the DVD, though. Which is nice.

* While the movie gets feminist brownie points for an awesome villain and the fairies, big points lost for the Queen, who is never looked at, spoken to, or given a name. She's just "the queen." That's a pretty garbage move, as she SHOULD be as important as anyone.

* Speaking of unused characters: Need further proof that the romantic leads are largely irrelevant to the main story except as props? Consider: Aurora is on screen for only 18 minutes, and Phil’s last line comes at about the midpoint of the film.

* Once again, the Disney Princess marketers make an odd choice, putting Aurora in a pink dress, based on a brief scene where Flora and Merryweather change the color back and forth, but it starts blue and it finishes blue, and she’s got a blue dress for pretty much the whole movie.

* I read several things that said this was the last fairy tale movie Disney made until the Little Mermaid, but what about The Sword in the Stone and the Black Cauldron? I know, they’re technically based on novels, but come on, if it looks like a fairy tale and quacks like a fairy tale…

* As much as I love the changes made to the Aurora/Philip relationship, this does make it so that the Princess and her kingdom were asleep not for the poetic 100 years of the story, but for maybe like a day at most. Possibly just a few hours.

* Legendary Warner Bros animator Chuck Jones actually animated some of the climax when the Warner Animation department closed down for a bit. I don’t know what made them open back up, but I like to think it was their biggest star going to work for the competition. (He eventually did some stuff for Hanna Barbera as well as some great independent stuff.)

* If you don’t know who Chuck Jones is, shame on you. Go to YouTube immediately and watch “One Froggy Evening”, “Duck Amuck”, and the greatest cartoon ever made, “The Dover Boys at Pimento University, or the Rivals of Roquefort Hall”


* I wonder what Merryweather’s gift was going to be at the baby shower. She wound up easing Maleficent’s curse, but she must have been planning something else. Flora gave physical attractiveness, and Fauna gave a nice singing voice. Since I like Merryweather more, I’m going to assume she was going to give political savvy or something useful like that.

* The Prince’s hair color changes from blonde as a kid to brown as an adult. This isn’t a problem, I was blonde as a kid, too, but I think they did it so we wouldn’t know it was him when he turns up later. But really, we’d have to be idiots not to spot it.

*Speaking of Phil, he’s wearing different clothes when he wakes her and when he goes downstairs with her to see all the woken people. Did he stop off to get dressed up? “Look, Aurora, I know you’ve had a trying experience, you want to meet your parents for the first time, but look at me. I’m all sweaty and I’ve got dragon blood on me, this just won’t do.”
Posted by Brian Lynch at 10:48 PM