1961 - One Hundred and One Dalmatians

Well, after the lengthy production and less-than-hoped-for returns of Sleeping Beauty, the company was starting to feel that feature animation was more trouble than it was worth. Fortunately, the form was saved by a weird little dude named Ubbe Eert Iwerks. Ub was a longtime animator at Disney. He had already done his bit for the company financially, through little tiny things like developing the live-action/animation hybrid technique and inventing Mickey Mouse.
But never satisfied with being an unrecognized legend, he went for it again, developing a new form of animation called xerography. See, the way they used to animate was the lead animators would make pencil drawings, and their staff would ink each frame onto an animation cel. Using a camera based on a Xerox machine, Ub figured out a way to transfer the pencil drawings directly to the cel, eliminating the costly, time-consuming, and labor-intensive inking process, and going straight to the colorists. Of course, it also eliminated the jobs of like 400 animators, but hey, omelets and eggs. So, armed with a fancy new tool, the rights to a good book, and fond memories of Lady and the Tramp, the team went to work. Feeling the inexorable march of progress as machines take our jobs? So am I. Wait, no I’m not. Well, regardless, get some Kibbles and Bits, unless you’re Bits-intolerant, in which case, the SoyBitz are okay, and you can hardly tell the difference. Let’s talk about One Hundred and One Dalmatians. 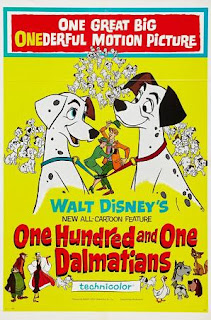 This was a really enjoyable one. The plot is simple enough, two Dalmatians fall in love, as do their owners. They (the dogs, that is) have fifteen puppies which are stolen by a thoroughly bizarre woman who wants to make them into coats, along with 84 others. The parents go on a cross-country trek to get them back. The spectre of Lady and the Tramp hangs heavy over this one, particularly at the beginning, which is another dogs’ love story. But the whole film needs to take a dog’s perspective of the world without seeming too samey, and largely succeeds. Rather than looking at the humans  as family, Pongo and Perdita refer to them as “The Pets”. Human faces are clearly seen throughout, we know their names (Roger and Anita), and rather than being entirely dog-centric, other animals feature, notably a duck, a horse, and a really awesome cat.

The plot is well-executed, though the middle gets a bit draggy. In order to find the puppies, Pongo calls on the Twilight Bark, a sort of dog militia/neighborhood watch, and we spend a long time going across the country seeing each dog on the chain barking along the message to the next group. It’s interesting, but we really don’t need to spend a few minutes with each one. It gave me a bit of character fatigue. By the time the puppies are found, the movie basically has a new set of main characters. Thankfully, they’re awesome. Our mid-film heroes are all the pets of a retired general who has named his sheepdog Colonel, his horse Captain (Thurl Ravenscroft, yaaaaaaay!), and his cat Sergeant Tibbs. Seeing the nervous, overworked sergeant sneak around to try and save the kids was one of the highlights of the movie, and managed to convey a real sense of danger.

That’s the real strength of this movie. There’s actually a good deal of suspense in it. The three villains are really well-realized. The henchmen, Horace and Jasper Baddun, are comical and goofy without resorting to the “not so bad after all” disease that tends to strike villain sidekicks. When they try to put off killing the puppies, it‘s not that they‘re squeamish, they‘re just lazy. Their boss, Cruella DeVil (and you thought Maleficent was an on-the-nose name), is another fantastic Disney villain. Her design is wonderful, as she’s scrawny as all get-out, but wears a voluminous fur coat and staggering heels that make her seem immensely imposing. As for her personality, she’s basically Leona Helmsley if she didn’t care what people thought of her.


Now, for the animation. Xerography has a very different look than the traditional ink-and-paint approach. Since the final product is based directly off the pencil sketches, the animation has a loose and scratchy feel to it, especially at this early stage in the technology’s development. This time around, though, it works. They keep the backgrounds loose and sketchy as well, which puts focus on the characters and makes everything look consistent. Many of the furnishings and such are uncolored, and sets are largely monochromatic. There’s some parts where it’s a bit choppy, sometimes there’s a bit of that “I know what book Shaggy’s about to pick up” type highlighting, but in general, it works. This time. My biggest complaint was that they dropped the widescreen and went back to the Academy Ratio.

Also of note was that this is the first movie in the series that isn’t making any real effort to be a musical. There’s one song in the entirety of the film, and it’s sung by Roger, who is a songwriter. It’s a really good one, too. When Cruella, who was a friend of Anita’s from school, shows up at their house, Roger talks about how creepy she is and winds up improvising a song about her. When she enters, he retreats upstairs, where he proceeds to continue playing his very catchy melody on various instruments, giving the excellent scene downstairs a soundtrack that is lively, appropriate, and totally digetic. I do have to question the song becoming a big hit at the end of the movie, though. Isn’t it slanderous?

* Voice-wise, the supporting cast is fun, but the Dalmatians are a bit bland. But Pongo is voiced by Rod Taylor, which means everything he says is like getting a hug from your imaginary British dad.

* Cruella bought the other 84 puppies legitimately, so why did she have to steal the other 15? There's no references to her needing 99 exactly, and even if she needed that number, are there not 15 other puppies in England she could buy? Of course, the fact that I didn't notice this until 2 weeks after watching it pretty much shows it doesn't really matter.

* When Anita is first introduced, she’s wearing a hat and glasses and reading a book in the park. And she’s a redhead. Anyone who knows me can guess my reaction. When she first gives a withering look to the goofball who interrupted her reading, it became hard to watch the movie, what with all the cartoon hearts suddenly floating around my head. 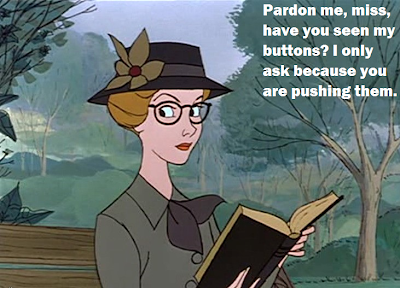 * I mentioned Ub Iwerks as an unrecognized legend, but it’s nice to know that’s no longer true. While the general public still doesn’t know the guy, he, along with Disney’s feature animation team, the Nine Old Men, was in the second wave of inductees into the official list of Disney Legends.

* The first wave, incidentally, consisted of Fred MacMurray. No, that’s it.

*Speaking of the intro, I feel bad for making fun of that robot comedian, so here’s a good one.

* Thanks to Discworld, it took me forever to get used to Perdita’s name, since every time I heard it, I parsed it in my head as “That Agnes what calls herself Perditax.” 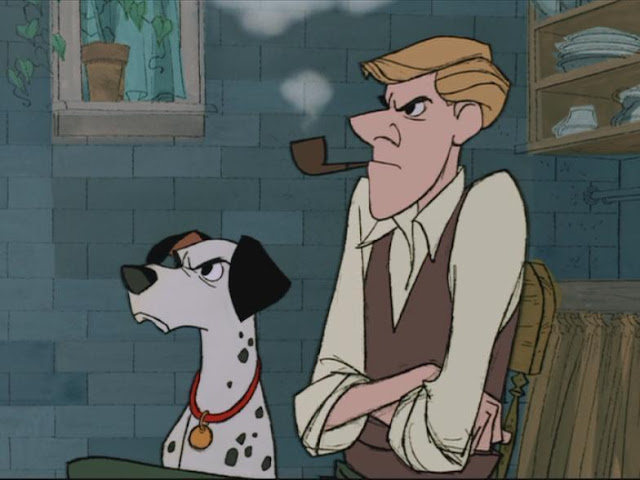 * The picture above doesn't get a funny caption, because it's there to demonstrate the sketchy remnant pencil lines that are a feature of this animation, as well as this movie's loosely colored backgrounds. If it did have a funny caption, it would probably be really hilarious. 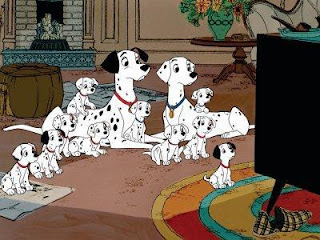 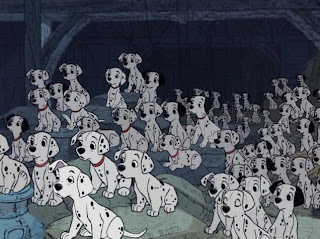 * And here's some cute puppies, because for a movie whose whole thing is having a lot of them, I really should have had some pictures.
Posted by Brian Lynch at 11:04 AM