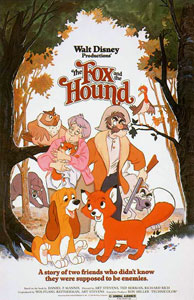 For the second time, I haven’t read the book, but I know a bit about it, and the movie follows its basic plot: A hunter owns two dogs, an experienced older one and a talented new one he’s training. When a fox raised by humans is released into the wild, he and his dogs wind up hunting it. When Chief, one of the dogs, is struck by a train while hunting the fox, Copper, the other one, develops a personal vendetta. Drama ensues. Now, I’m not sure who pulled for what changes in the story, but there are four major thematic shifts I noticed in that storyline:

* In the book, Chief is the young up-and-comer and Copper is the old favorite. Their roles are reversed in the movie.
* Tod, the fox, was also raised by hunters in the book, but by an anti-hunting dairy farmer in the movie.
* The movie focuses on Tod and Copper as individuals, whereas the book was more about their surroundings and society as a whole.
* Rather than being raised separately and meeting as adults, Copper and Tod become childhood friends in the movie, then are separated, and reunited as adults.

As well you can imagine, all those changes were made to bang away at the heartstrings, especially the last one. The added aspect of the Fox and the Hound’s childhood friendship dominates the movie. You’ll rarely see any merchandise or such with the adult forms of the characters, and it’s not just because the kids are more adorable. The half of the movie that contains them is so solid, and the latter half so sloppy, that it’s almost like I’m watching two movies.

In the first, we see Copper and Tod becoming friends, not knowing that they live in a world that will set them against each other, and not believing the people who tell them this. They are played, quite winningly by Corey Feldman and Keith Coogan, with Pearl Bailey as the owl who serves as a semi-narrator and Wise Black Woman Advice Dispenser. This looming turning point in their relationship is handled so well, it almost seems like an anticlimax when it comes.

Chief getting his by the train sets up one of the big act 2 problems. It was a great idea to change up the positions of Copper and Chief. While it was a practical choice, as the new dog had to be a the one to befriend the fox, it made Chief's character a lot stronger. His jealousy at the new guy, urge to prove himself, fear of being replaced in his owner’s affection, it’s all great. But the studio wimped out on killing him, as happened in the book, instead just giving him a broken leg. This makes Copper and his owner’s mad swears of vengeance, to the point of hunting Tod  on a wildlife reserve, seem a bit petty.

The casting also works against the second half. Suddenly, rather than being two seven-year-olds, Copper is Kurt Russell, who was 24, and Tod is Mickey Rooney, who was 61. Now, nothing against Rooney, he’s a great performer. It’s no surprise his career has spanned nine decades. But while he does a great job on a technical level, he sounds like a 61-year-old trying to do a young man voice. Tod’s animation also gets a weird tweak in the second half, becoming oddly anthropomorphic at times.

Slight digression, but while I’m talking miscasting, you know I love Pat Buttram, I’ve said very nice things about him. But he was very wrong for Chief. If you showed me the design and described the character, I’d cast Ron Perlman or Kris Kristofferson or someone like that. Buttram’s got a voice for comedy, and he was not the guy for the part.

Back to the second half of the movie, there’s also a really awkwardly inserted romantic subplot with Tod and a female fox. It comes out of nowhere and grinds the movie to a screeching halt. Not every movie has to have a romance in it, and  if you’re going to introduce it into the story 20 minutes from the end, it’s going to seem out of place. There’s also a subplot with a sparrow and a woodpecker (played by a  barely-trying Paul Winchell) trying to catch a caterpillar. Again, this is a pointless distraction from the main plot. If they were trying to make a relatively serious movie, there are better ways of working in comic relief than stopping for some kind of low-impact Tom and Jerry in a tree shenanigans.

All that said, I still liked the movie. I said the stuff with them as kids overshadows the adults stuff in merchandise; the same goes for the movie itself. I’m dwelling on the bad stuff after the movie falls apart, but that’s because that stuff needs explaining. The good in this movie stands on its own. The impending society-driven collapse of the friendship works in a way that actually seeing it never could. And the stuff that makes the latter half fall apart is isolated mostly in that bit.


I should also mention the animation, which is pretty shaky. I had high hopes for the new process, and while everything is still smooth and clean, the differently-colored outlines that were used so well in The Rescuers are a bit jarring this time around. There’s also a lot of disconnect between the characters and the background, resulting in a large amount of Fudd Flags and an occasional sense that you’re watching paper cutouts superimposed on a still image. Which you are, more or less, but you shouldn’t notice. It’s especially noticeable during the driving scenes, which somehow make animation look like rear projection. And it’s too bad, because the designs and character work are really excellent here. It’s difficult to see in still form, but the range Slade goes through at the end is excellently done. 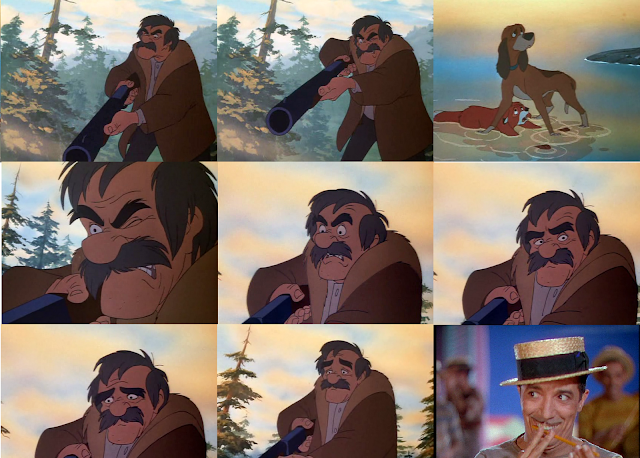 This one is definitely a recommendation. It's flawed and inconsistent, but it does succeed admirably at its main goal, namely to make you have ALL THE FEELINGS. And if some of those feelings have to be annoyance at lame subplots and shoddy animation, that's just the price we pay.

* In the previous review, I gave a rundown of the new talent that joined the studio at this time, but somehow forgot John Lasseter and Brad Bird, who came on with this film. Lasseter would go on to develop CGI technology at Lucasfilm, then form Pixar and oversee all their animated films, and eventually return to Disney as the chief creative officer of the animation studio and Disney Imagineering. Bird would go on to direct classic films like The Iron Giant, The Incredibles, and Mission Impossible 4.

* What? Mission Impossible 4 was really good.

* Tod falls in love with the first female fox he sees. I’d love it if it turns out she’s actually kind of ugly by fox standards.

* Like The Rescuers, the music is largely bland 70s pop sung in the background of whatever scene. But at least most of them are sung by Pearl Bailey.

* Everyone dies in the book, as well you may expect. It’s not just Chief. Copper actually kills Tod, and then later his owner is being sent to a nursing home that doesn’t allow dogs, so he shoots Copper in the head. Also, Vixey and Tod’s other mate. It’s that kind of book.

* Speaking of great character designs, have some free childhood trauma.

* And in the interest of balance, enjoy this collage of the scene where Tod suddenly grows thumbs for no reason.