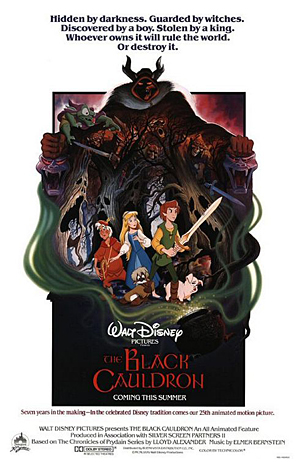 Oh, I do believe I may have tipped my hand with that last rhetorical there, mayn’t I? First, the background. This was, as I said, intended to be a serious, mature, and dark movie to capture the adult audience. Everyone was on board with that, the old and new animators alike, but the animosity between the two groups had basically gotten to the point where they weren’t even speaking to each other. The lead animators of the old crew had more or less all gone by now, but their assistants were still clinging on, resentful of the new crew of hotshot CalArts graduates. This resulted in a movie that was wildly inconsistent in tone and quality, and I have no idea who to blame. Things were not helped by a third production team: The executives. While back in the Walt days, they largely let the animators get on with things, the 80s were the corporate age, and there were some very powerful people fighting over this film, including studio head Jeffrey Katzenberg and company CEO Michael Eisner. Upon seeing the final edit of the movie, Katzenberg suddenly decided it was too dark and unilaterally locked himself in the editing room to hack it to pieces. Eisner stopped him, but agreed to push back the film's release by six months for retooling. About 15 minutes were cut with nothing to replace them. I’m not going to be so naïve as to blame that for all the movie’s failings, but it couldn’t have helped.


And what are the failings? Let’s start with the characters. Our “hero”, Taran, is an apprentice pig-keeper responsible for the stewardship of Henwin (my research material insists it’s Hen-Wen, but they are all clearly saying Henwin), a pig who can foretell the future. Taran is a whiny, petulant ego-case who insists that he is to be a great knight someday, and while he is off daydreaming about how great he is, Henwin is captured by the forces of our antagonist, the Horned King. You may expect Taran to grow and mature over the course of his adventure, becoming the hero he always was inside. You can just carry on expecting. As for the villain, I don’t need to describe him, because he’s just what you get when you pop Skeletor, Mumm-Ra the Everliving, Megatron, Cobra Commander, and Gargamel into a blender and hit frappe.

He’s got the de rigeur hunchbacked lackey that he strangles for every minor failure, of course. And Taran’s got three idiots of his own. There’s Princess Eilonwy, who occasionally gets a spot of press for being one of two Disney Princesses not to be featured in official Disney Princess material. I’d assumed that was because the film was a flop (The other unlucky princess is from Atlantis, after all,), but I think it’s more that she’s a shallow, annoying character who never really provides any evidence that she is a princess. There’s also Flooder, whose name is spelled in some silly Welsh way, but we all know how I feel about that. He’s a bard, who is also a coward and constantly endangering them with his bumbling ways. A string on his harp breaks every time he lies, which I kept expecting to be a plot point, but wasn’t. There’s also our comic relief characters, Gurgi, a sort of Ewok thing that is also cowardly and talks like he’s auditioning to be Donald Duck, and Doli, a cranky old fairy who bypasses “80s Saturday Morning Cartoon” and goes straight for “80s Breakfast Cereal Mascot” in his characterization.

The plot… Well, I don’t know what to make of it, really. It’s based on two books by Lloyd Alexander, and as I understand it, they are quite good, and the characters aren’t nearly as annoying. But the plot seems to be largely the same, i.e. clichéd out the pigsty. But he was writing in the mid-1960s, when this stuff wasn’t as clichéd as it is now, so I can probably go easy on him. I think I can blame the Disney folks, though. When a Lord of the Rings movie finally came along after years of development, they changed things to make it work better with modern storytelling techniques, and it improved the story. Increased roles for Arwen and Eowyn, introduction of real conflict between Frodo and Sam, a more varied personality for Faramir, the moment of realization for Treebeard… I could go on, but the fact is, these were changes that were necessary to make the story work for a movie. Disney made changes to the story of The Black Cauldron, but rather than improve it for the medium of film, it’s just to make it less from a rather typical high fantasy book into a rather typical 1980s action cartoon. I might as well be watching G.I. Joe

The animation gets a cut here, despite the use of another technical advancement, the APT process. This is another form of xerography that can copy blocks of color in addition to lines. Unfortunately, that leads to random shifts in color tone, and characters that don‘t appear to match their backgrounds at all. There’s no weight, no gravity, no lighting, and Fudd flags abound more than ever before. Characters often develop a sketchy white outline around their proper outline, and there’s occasional random use of photo backgrounds that don’t fit at all. I’m not going to lay all the blame on the method, because they use the same method in their next three movies, and they look fantastic. I just think that the background fighting and budget cuts took their toll on what we can see.

By this time, Don Bluth had left Disney, fed up with the company, and formed his own independent studio, making the classic film “The Secret of NIMH”, which captured the respect of critics with its mature and rather scary style. In a lot of ways, this seems like a response to that, but despite the work of Tim Burton and others, it just can’t measure up. There’s a pretty severe learning curve coming up, and the new guys are going to really take charge, in a pretty intense way.

* Because haggis is generally agreed to be disgusting, but some people really like it.

* There are three witches in this movie, but rather than the traditional Maiden, Mother, and Crone, they seem to have gone with Crone, Mother-in-law, and Overweight Harlot. There’s a lot of “humor” with O.H. smooshing Flooder into her breasts. HA HA! She’s fat but has the audacity to be sexual. That’s… inherently funny? I guess?

* I couldn’t remember while writing the last bit what plot-relevance the witches had. Then I remembered they gave The Black Cauldron to the heroes, which should have been easy to recall. I think this movie broke my brain.

* The Black Cauldron is the plot MacGuffin, by the way. It's a powerful weapon that the heroes must destroy, lest the enemy use it. Not that that sounds familiar or anything.

* Oh, and when they defeat the villain, his tower collapses. Which is weird, because it's not even really his. He's just squatting.

* And all it does is reanimate the dead, who are really slow and shambling and rickety.


* There’s more special effects animation in this one than we’ve seen in a while, and it’s not all terrible. So that’s something.

* Disney acknowledges this movie in their theme parks less than any other, including the infamous Song of the South. The only standing reference to it was a restaurant called “Gurgi’s Munchies and Crunchies” that was removed in 2002.