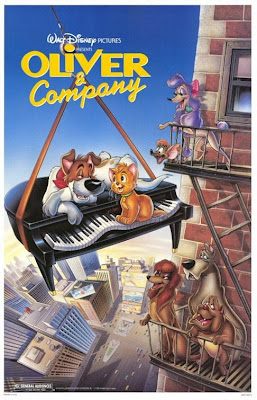 The first thing I want to address is the modern setting, because that has a MAJOR effect on the tone of the film. This is only the fourth movie they’ve done with a modern setting, and the first that really goes for it. Dumbo was set in the timeless world of the circus, and One Hundred and One Dalmatians and The Rescuers spent the majority of their films in rural locations. This movie, however, is set in New York City, and it really goes at it full-blast. The wire-frame technique from the last film’s Big Ben (containing clock) finale is used throughout here to create the vast city streets and legendary New York traffic, and it looks fantastic. The big and boxy cars of the mid-80s are perfectly suited to the necessarily blocky frames, and there’s an extremely citylike feeling of depth and scale.

It was exactly the right choice to make, because this is, in case you weren’t aware, based on a Charles Dickens novel, Oliver Twist. Dickens’s depictions of London are justifiably legendary, and the loving attention they lavish on NYC in this is the perfect connection to that. In case you were wondering how Oliver Twist becomes a pet-based Disney flick: In the original, Oliver is a homeless orphan who befriends a street urchin named Dodger. He is then taken in by Fagin, a sleazy jerk who takes care of a small army of children in exchange for them stealing for him. But he’s in deep debt to one of his former pupils, the vicious Bill Sikes. Oliver is taken in by a wealthy old man and comes to love his new home, but after being “rescued” by Dodger, Fagin attempts to ransom him, which gets violent and dangerous when Sikes gets involved.

The Disney version is exactly the same.

Oh, sure, Oliver’s a kitten, Dodger’s a stray mutt, Fagin’s gang are dogs, and he’s adopted by a cute little girl instead of an old widower, but still, they translated the beats of the story impressively. The only major change is that Fagin is kind of a nice and sweet guy who uses the dogs less for stealing and more for garbage picking, begging, and unsuccessful short cons; and Sikes is not his former student, but a vicious loan shark. Which makes sense, because if Sikes learned from Fagin, he’d be a dog. I suppose it also would have been nice for Dodger to be a puppy rather than an adult dog, to really make him a peer of Oliver like in the book, but the character is quite well-realized and well-acted, so we’ll let that go.

The look of the film is extremely 80s, but I don’t mean that in a critical way, nor to say that it’s super-exaggerated like Breakin’ or something. The animators very clearly studied the fashions and styles of the 80s, the layout and design of the streets and buildings, the patterns of city movement. I can’t tell you how perfectly they get the feel of the city, starting right from the opening montage, narrated musically by Huey Lewis, the first of the 80s superstars that populate this film.

The main draw is Billy Joel, who plays Dodger. He proves a very capable voice actor, turning up his Noo Yawk mannerisms to eleven. His musical number is the best one in the movie. You’re thinking about it right now. It’s the only part of the movie you remember. Ruth Pointer is another of Fagin’s gang, and sings a song so generic that I forgot about it while I was still watching it. I just started humming Billy Joel’s song. Bette Midler plays a snobbish show poodle owned by Oliver’s adopted family. I have no strong opinions about Bette Midler as a singer, but I’ve always rather liked her as a person. She seems sort of pleasant and goofy. She delivers her dialogue excellently, though her song reminds me mostly of a moment in The Drowsy Chaperone where the narrator informs us that the actress playing the Chaperone insisted on having “A Rousing Anthem” in everything she did, no matter how inappropriate to the situation it is.

The other cast members are all quality. Future teen heartthrob Joey Lawrence as Oliver, Dom deLuise as Fagin, Cheech Marin and Roscoe Lee Brown as a Chihuahua and Bulldog in his gang. Taurean Blacque gives real menace to Sike’s vicious Doberman, and Rober Loggia absolutely nails every second of it Sikes himself. And I meant what I said earlier, he’s probably the best villain we’ve seen so far. Oh, sure, your evil queens and flashy witches make the big splash, but this guy’s such a real kind of evil, you feel it. Oh, how you feel it. He’s animated by Keane, and just like with Ratigan, the main theme of the performance is the interplay of thuggish brutality and self-conscious sophistication, only this time, the brutal part is MUCH closer to the surface. And after seeing magic spinning wheels and Dalmatian coats, some simple extortion, kidnapping, and dog fighting seems all the scarier. Also: his death scene will not be topped until maybe Tarzan. See, after Sikes kidnaps Oliver’s owner to get a ransom from her rich parents, the dogs and Fagin go to rescue her. Sikes gives chase, winds up driving down the railroad tracks, and… Ah, just see for yourself.

The animation is also solid. Apart from the excellent use of the computer wire-frame technique I already mentioned, they’ve obviously gotten comfortable with the ATP technique and thin outlines are back. The character designs are really strong, too. Everyone’s personality comes across really strongly just by looking at them, and the even more overtly stylized humans look fantastic.

So considering that I’ve had only good things to say about this movie, it may be surprising to hear that it wasn’t among my favorites. Don’t get me wrong, I really liked it, and there’s nothing that it really does wrong. But it doesn’t really hang together that well. It’s very disjointed. A lot of that is a holdover from the Dickens. Dickens wrote for serial publication in magazines, so naturally, a lot of his work is quite episodic. I won’t criticize them like I did with the Black Cauldron, because more than just an old-fashioned story, this is an essential part of the structure, but it still makes for a bit of an unsatisfying story. Likewise, the actual dialogue is rather dull. Not bad or anything, just kind of… there. I certainly enjoyed myself, and I definitely recommend it, but in the end, it’s a technically awesome movie with brilliant moments that just doesn’t have the spark to make it a real classic. We’ll save that for next week.

* A lot of people in the opening scenes, which take place mainly at the animals’ level, are wearing spats. Were there a lot of spats around in the 80s? Or did they just figure that if they were drawing a lot of feet, they had to do something to make them interesting?

* While there’s a few cameos in this film from former Disney dogs, like Pongo and Jock, far more surprising is the brief appearance of Scooby-Doo. Nice one, animators.

* While most of the dogs’ barking is done by sound effects, Georgette’s is just Bette Midler yelling “Bark bark!” I have no problem with this, though, because it’s funny.

* Jenny’s “school bus” is just a wireframe for a pickup truck with a covered bed and a “school bus” sign on top. Seriously.

* This is what, the third British Bulldog we’ve had? Okay, I guess the one in One Hundred and One Dalmatians didn’t count, they were all British.