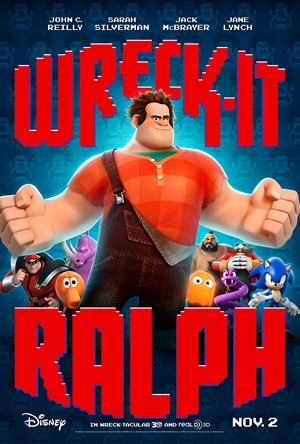 I don’t want to go into too much detail on the plot, since it’s still in theaters and I’m urging you all to see it, but it is excellent. The bare-bones synopsis: The movie is set in an arcade, where after closing time, characters unwind and visit other games, traveling through the surge protector. Wreck-it Ralph is the antagonist of the classic game Fix-it Felix Jr., and as his game hits its 20th anniversary, he’s feeling a bit down on being a villain. After a disappointing Villains Anonymous meeting (which includes appearances from Bowser, Zangief, the House of the Dead axe zombie, and many others), he sets off to the brand-new first-person shooter Hero’s Duty, where his building-wrecking skills will be more appreciated. On the way back to his game, he gets lost in the candy-themed Sugar Rush Speedway, a late-90s kart racer with a rotating roster. As Ralph gets caught up in helping a glitchy aspiring racer try to get into the next day’s race, he’s pursued by Fix-it Felix Jr., who needs to get Ralph home before their game is found defective and unplugged; and Sergeant Calhoun of Hero’s Duty, who believes Ralph has unwittingly brought a dangerous alien to Sugar Rush.

And yes, that’s the bare-bones version. There is a LOT of plot in this movie, and what I wrote there barely covers the first half. But the movie, quite impressively, never becomes muddied or confusing. While the circumstances change frequently, it always seems like a logical step, the next obstacle to overcome, and never comes off as contrived. Actually, it seems like levels in a video game, which I think we can safely assume was the intention.
A big help in making this all work was the characters, who are very well-developed and excellently cast. As they come from a variety of games, each comes with their own design style. Multiple styles actually. The characters from Fix-it Felix Jr. have their in-game blocky 8-bit style, and their cartoony rounded “behind the scenes” look. Ralph even gets a few more as he walks through a Pac-Man level stealing cherries, or has a drink at Tapper‘s. He’s voiced by John C. Reilly, who used to have quite the dramatic career playing these sorts of sensitive brutes before he took up as Will Ferrell’s understudy. The aforementioned glitch, the adorable Vanellope von Schweetz, is a rude and hyperactive child voiced by Sarah Silverman, Fix-it Felix Jr. is an overly polite hayseed voiced by Jack McBrayer, Sgt. Calhoun is a tall, strident, angry woman with short blonde hair voiced by Jane Lynch. So no one’s really taxing themselves. But at the same time, they fit their characters like a glove. Calhoun in particular, who speaks in lengthy inspirational speeches full of strangled metaphors, and if they didn’t come from Jane Lynch’s prodigious improvisational abilities, they came from someone who’s studied her work extensively.
There’s also a lot of really good supporting actors. The various video game characters are played by some excellent voice actors that don’t usually do much for Disney, including John DiMaggio, Adam Corolla, Jess Harnell, and Maurice LaMarche. Sugar Rush’s resident mean girl is Mindy Kaling,  King Candy is voiced in an excellent Ed Wynn impression that I assumed was one of Disney’s utility men. Much to my surprise, it turned out to be versatile character actor Alan Tudyk, doing a fantastic and utterly unrecognizable job.

Wreck-it Ralph is an unusual movie to say the least. Frankly, it doesn’t feel much like a Disney movie. Not in a bad way, after all, everyone’s allowed to branch out and try new things, and that goes for film studios, too. After all, if Pixar can do a fairy-tale adventure with a princess and a musical number, Disney can do a character-driven modern story informed by an unusual setting. In fact, a lot of people assumed it was Pixar, which I think is mostly to do with it being computer animated, but I think there was a very strong Pixar influence in this one. The unusual setting, as I said, is very Pixar. It also has a strong feeling of Dreamworks, the other big players in the computer animation game. The sense of humor is pretty Dreamworks, with lots of slapstick, pop culture references, and product placement. That‘s not a bad thing. I quite like Dreamworks now that they‘ve found their voice, and the product placement in this movie, mostly candy brands in Sugar Rush, is always for the sake of a good joke. Nesquicksand. Heh.


Of course, there’s also the video game characters, which some might see as a further example of product placement. I really think they made the right call on this, though. Think of Toy Story. While the majority of characters were generic or original, they did use some licensed ones, most notably Mr. Potato Head, Barbie, and Ken. Sure, the story could still be told with Betty, Karl, and Senor Turnip-Face, but in order to get the jokes they needed, they had to remove that level of disconnect, and the talent involved made sure it never felt like an advertisement. It’s the same here. Sure, they could have had Ralph at his meeting with a dragon, a general, and a mad scientist, but seeing him with Bowser, M. Bison, and Dr. Robotnik draws us in that much easier. Seeing Ralph wander disconsolately through Pac-Man gives a very different emotional impact than if it were Puck-Muncher.

I don’t want to go too much more in depth, though there’s a surprising amount of depth to go into. I will just implore all of you to go see it, particularly if you are a fan of video games. When this blog wraps up, probably around March at this point, I’ll post a few spoilery spare thoughts I didn’t want to mention.

* I did not intend for Puck-Muncher to sound so dirty.

* It seems that all of the various video game cameos were very accurately depicted, with the exception of Street Fighter II’s famous Russian wrestler Zangief, who is depicted as a bad guy, and whose name is pronounced wrong. Apparently, the director just had such a tough time against him as a child that he can’t see him as anything other than a villain. I think that’s fair. After all, the characters didn’t have particularly detailed personalities apart from what the players project on them.

* Probably the most famous character in the movie is Sonic the Hedgehog, who appears giving a public service announcement. This is hilarious, assuming this was the intended reference.

* Most of the racers in Sugar Rush Speedway aren’t specifically mentioned by name, so you need a quick eye to spot them as they show up on the leaderboad. It’s worth it though, to catch the names, all of which have been designed to simultaneously sound obnoxiously sweet and also disgusting. Examples include Taffyta Muttonfudge, Jubileena BingBing, Snowanna Rainbow, Gloyd Orangeboar, and Rancis Fluggerbutter.