“Hello? Yes, this is Bob Newhart. Do another voice for Disney? Sure, I’d… Not *another* voice? I don’t think I follow you. Well, what’s the name of the picture? The… what? The Rescuers? We already did that one, didn’t we? Oh. Ohhh. Oh, I see, after several abortive attempts to make a sequel to the Rescuers, you’re finally pulling it off? Did anyone like it the first time? Yeah, I guess it did okay. So which of the books will this one be based on? Oh, an original story. Australia? Yeah, I guess it is pretty popular right now. Say, don‘t these cartoon pictures take a long time to finish? What if everyone‘s over Australia by the time it comes out? Yeah, you‘re probably right. I… Mm? Am I what? Fair dinkum bonzer? Ah, well, yes, I suppose so. So I‘ll just go and get a vegemite and Foster‘s sandwich and talk about The Rescuers Down Under. Uh-huh. Okay. Bye now.” 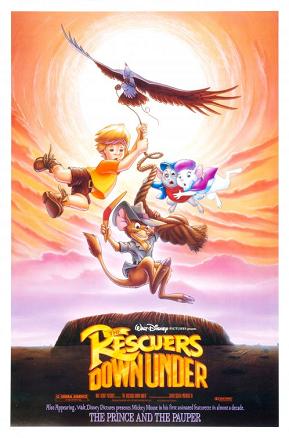 Ah, boy. Yeah, like I mentioned a few times, there had been some random attempts to do a Rescuers sequel before, or at least bring back a character or two, and when they were in their fairly experimental Great Mouse Detective phase, they finally put one into development. After all, they must have theorized, people clearly love mice. Well, by the time The Little Mermaid taught them that no, people love singing magic princesses, this was already well into development, and on its way to being the Disney company’s number one footnote. I will say that they definitely put a lot of effort into it. This wasn’t a hacky sequel, nor did they rush anything when their new model became apparent, though I have to imagine they were champing at the bit to move on to Beauty and the Beast.

I also don’t think the Australian setting was an attempt to be trendy. Well, not just an attempt to be trendy. I have no doubt that the setting was largely in response to, as the Simpsons put it, America’s brief-lived fascination with Australian culture. For some reason, the Aussies and Disney thought this would be a permanent thing. But despite the setting’s likely genesis, they really made it work, and it makes sense as a choice - sort of. What does make sense is that there are unique landscapes, the wilderness of the outback, and Australia’s famously varied wildlife to participate in the story. What doesn’t… Well, we’ll get to that. More of the good first. Specifically as it relates to those landscapes.

Not unlike the first Rescuers introducing the advanced xerography, this one included a huge leap forward in animation technology, a program called the Computer Animation Production System, or CAPS. CAPS bypassed the copying and painting of xerography with directly scanning the drawings into a computer, where they could be digitally colored and sequenced. This also allowed even better integration of computer animated elements, which they certainly made use of. Again and again and again. There are so many dramatic POV flights through sweeping vistas that I was starting to get motion sickness. The first is the most famous sequence from the movie, a giant majestic eagle sweeping majestically through the majestic Australian wilderness with majesty. It’s a really great sequence, and joking aside, it is actually majestic as all get out.


The casting is also quite good. In addition to the returning Bob Newhart and Eva Gabor, we get a deliciously hammy George C. Scott as our villain, an animal-torturing poacher straight out of Captain Planet’s nightmares, and John Candy as Wilbur, their new albatross partner. Character designs are quite good, though they‘re mostly just generic funny animals.

I’m sure you all remember my huge sticking point with the first Rescuers film. The talking mice, their apparent openness in the world, and who can and can not understand their speech. There was also the minor issue of what exactly the Rescue Aid Society aims to accomplish. Well, you may be happy to know that in this one, it’s even worse.

The plot involves a young boy named Cody, who lives on a wildlife preserve in the Australian Outback, and suffers from Accent Abandonment Syndrome. One day while exploring, he meets an enormous eagle, Marahute, who he rides around on and bonds with. But a sinister poacher named MacLeach has killed Marahute’s mate and wants to go 2 for 2, so he kidnaps Cody to try to get him to reveal the location of her nest. Some local mice get wind of this and send word to the Rescue Aid Society for help, and Bernard and Bianca are assigned to the case.

Okay, is there really no more practical way to go about this? Let’s convert this into human terms. George C. Scott kidnaps a kid in Australia. The police are informed, and their first move is to fire off an e-mail to NYC asking for two people to come by and see what they can do about it? And yes, when I say the police are informed, that is equivalent. The RAS headquarters in New York is informed of this by their local agents in Australia, using telegraphs and such. They even sneak into a military installation to send a message by satellite, so they’re definitely field agents. And when B&B arrive, they’re guided by one such agent, who’s far more capable than they are. Why didn’t he just go after the kid? And how do the mice operate in such secrecy if they’re hacking military satellites? And the clothes! And signs! CLOTHES AND SIGNS!!?


And as with the last one, the kid can talk to animals, except the villain’s sapient yet mute reptile henchpet (a goanna named Joanna, which is cute). And neither the kid nor the animals mention this as being the tiniest bit odd. I mean, I think they’ve established that human’s in general can’t understand them, but despite the more clear unusualness of it, no one notices it as odd. Not the kangaroo, not the koala, not the platypus. Did I mention this was Australian? Oh, and Marahute is also mute, for no reason.

But despite that aspect of it, despite the overuse of  the new animation, despite the villain putting the kid into a ludicrous James Bond deathtrap instead of just feeding him to a crocodile, I did like it. It’s not quite as good as the original, but it’s a worthy sequel. Certainly better than Crocodile Dundee 2. I’d say it’s a bit underrated, but that’s a bit unfair, because when it’s rated at all, people tend to praise it maybe a bit more than it deserves. But a bit of infrequent overrating is probably earned given how it gets lost in the shuffle. Definitely one worth seeking out.

* There’s a subplot about Jake, the Australian field agent, flirting with Miss Bianca, which shakes the confidence of Bernard, who is trying to pluck up the courage to propose to her. I was actually surprised at how well this was handled. Jake is never presented as a villain or a seducer, Bianca’s not presented as potentially unfaithful, it’s just a good, honest portrayal of adult romantic insecurity.


* Jake was referred to in all the stuff I read as a kangaroo mouse, but those are only found in the US. I think they meant hopping mouse.

* More weirdness in the Rescue Aid Society’s methods: After a rough landing, Wilbur is left in the care of a RAS doctor, who attempts to perform unnecessary surgery on him, for… reasons? This is never addressed.

* Unless I missed something, this is the first Disney movie to feature a slapstick comedy bit involving an albatross wearing a bra.

* As a former employee of Outback Steakhouse, I am licensed to say this film is entirely and in all ways accurate.