Boy, when I started to write this one, I was in a pickle. I didn’t really have anything to say about Beauty and the Beast, because - well, I try not to overexaggerate things, but it’s perfect. Not flawless, mind, there’s still the occasional goofy bit of animation, and Belle can be a bit of a doormat, but what they made succeeds on every major level. The songs (Menken and Ashman again) are great, the voices (especially Paige O'Hara as Belle and Richard White as Gaston) are fantastic, the dialogue is tight and funny, the designs are imaginative, the romance is heartfelt… I didn’t want to write a review saying “This is great, this is great, this is great,” over and over. Especially since you’ve seen it! Yes, you, the person reading this, has seen this movie. Everyone has! How can I find a good way to approach telling everyone roar they already know? I mentioned this on Facebook, and my friends started chiming in with suggestions for topics. So here it is, the first-ever viewer mail edition of My Year With Walt Disney Animation Studios! Feeling participatory? So am I. So try the gray stuff, it’s delicious, and let’s talk about Beauty and the Beast. 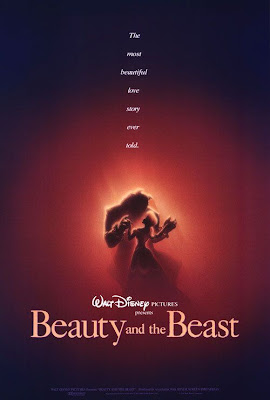 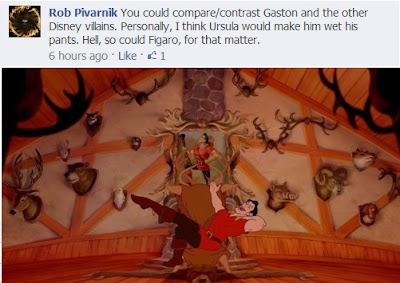 I think you're not giving Gaston enough credit. While the basic idea is an obvious one, a beautiful man with an ugly heart to contrast the monster with hidden depths of goodness, they made the character more complex than they needed to. He's not at all intellectual, but he is quite intelligent and calculating. His single minded  determination to never be denied anything is backed up by actual nerve. People sometimes remember him as a coward because he begs Beast for his life before stabbing him in the back, but he was literally being dangled off a building like so much Prince Michael Jackson II. Prior to that, he was storming a magic castle and holding his own against a 7-12 foot tall monster. I think he could do all right for himself. Of course, in the Disney Villain Hunger Games, he'd still go out pretty early. All the hunting skills in the world can only take you so far when the competition is like 4/5 evil witches. 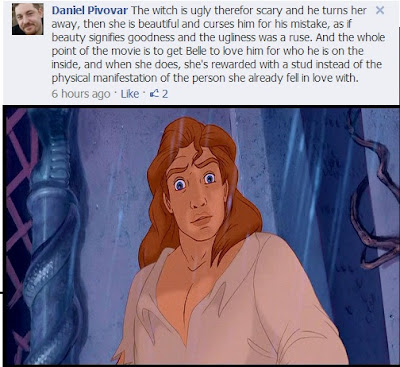 Speaking of. Well, as I mentioned, the very existence of Gaston kind of belies the claim that the movie is exclusively pro-physical beauty. But that is something the animators struggled with, when they realized that the reason they hated every "prince" design they came up with was because everyone had fallen in love with the Beast. This is not a new problem by any means. It is said that Marlene Dietrich herself, sitting next to Jean Cocteau at the first screening of his masterful 1946 adaptation, called out "But where is my beautiful Beast?" when the prince appeared. But in both Cocteau's and Disney's, Belle is hesitant. She doesn't trust the goofball in the ripped-up pants. She, like Dietrich, wants to know the whereabouts of her beautiful Beast.


As to the more direct question of the enchantress, if you wanted to teach a jerky guy not to judge by appearances, than being an ugly person while you curse him might send a mixed message. Probably better to go "Psyche! I'm hot! And a jerk! Enjoy your life as a buffalo gorilla!" 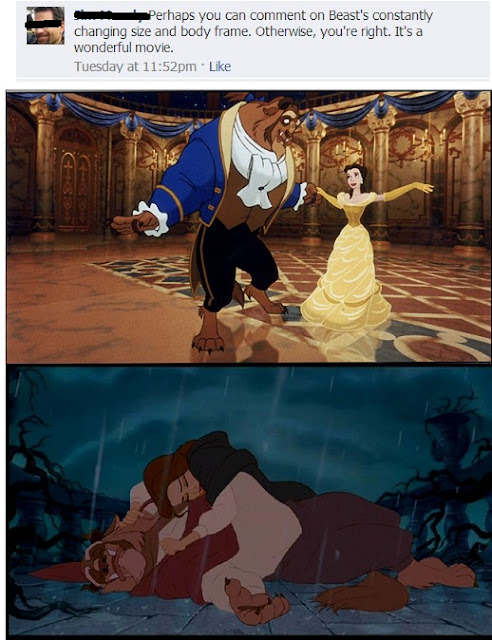 Nice job covering your hinder there, Friend Who Definitely Doesn't Work For the Disney Corporation. My insider source is right, Beast changes in size rather a lot. He normally seems to hover at eight feet or so, but seems able to grow about a yard when convenient. But he is animated by Glen Keane, who, as I have already mentioned, has a gift for animating gigantic characters, and part of that gift is knowing when to adjust the size a bit. If you're looking for it, you'll notice it - in the ballroom scene, for instance, Belle reaches his shoulder as they walk in to eat, his chin as they enter the dance floor, and his chest as they dance - but Keane works it so naturally it's hard to spot. Also, he switches between biped and quadruped a lot, which helps keep us confused. 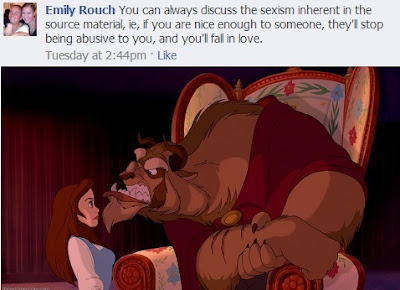 I've heard a lot of people say this, but I don't buy it. For one thing, it's not in the source material. In the original story, the Beast is nothing but kind to her from the beginning, but she says she only loves him as a friend (it probably sounds better in French) until he gets incapacitated by heartbreak when she takes a long weekend, and she feels guilty and says she loves him after all. I could write an entire book on the unfortunate implications there, but Disney removed them by having the Beast act not as a creepy weirdo, but a roaring tyrant.

And even in this movie, it's not as present as people seem to think. When he is cruel and demanding to her, she despises him, and flees the castle. She only comes back because he saves her life, and she feels obligated to return the favor, but even then she's not remotely happy with him. It's only after he starts feeling actual gratitude that they make a connection, maybe the first genuine one he's ever made. He stops the abuse first. Then the connection grows. It's made quite explicit in the movie that she doesn't think of him romantically at all until she sees him trying to feed the baby birds. 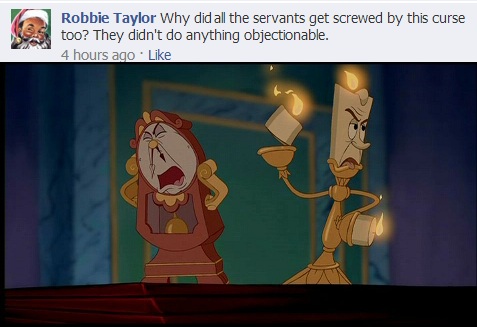 Standard fairy tale rules, man. Why did the whole kingdom have to go to sleep when Sleeping Beauty pricked her finger? Because the common people are just appendages of the royalty in these things. That's why I don't read much High Fantasy. Too much of what the rich people get up to, not enough of the average joes. Look at Game of Thrones. Two seasons in, and the most notable character that's not noble or working directly for one is Hot Pie. And we only get to see him because he hangs around Harry the Not-a-girl.

The writers of this film agree with you, though, and in the stage musical version, they are explicitly being punished for bringing up the prince to be such a privileged little turd. 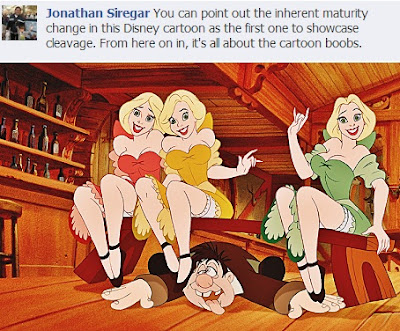 I'll be sure to keep an eye out for that. Ahem.
Posted by Brian Lynch at 9:04 PM