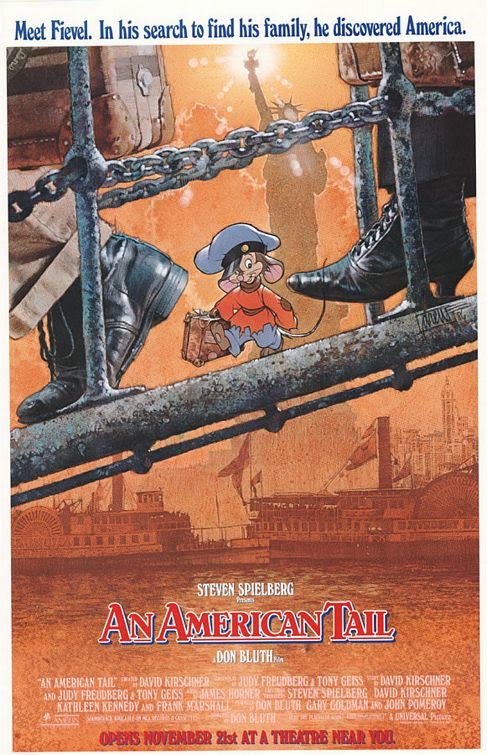 You know, for months, I’ve been characterizing Bluth’s filmography to people as four good movies and a sharp downhill turn, but not having seen this one since my childhood, I was sort of assuming. And I wasn’t… completely wrong? The film contains may winning moments, and Bluth certainly knows how to work the heartstrings - a talent that will prove ever greater over the next few films - but as a whole, there’s a lot of the movie that just doesn’t work.

As a critic, it’s important to be aware of what complaints are my personal issues, and which are more objective, so I’d like to get the major personal one out of the way first. HOW DOES THIS MOUSE WORLD WORK?! It’s like The Rescuers, where there is no apparent effort made to conceal the world of fully-clothed, intelligent, industrious mice from the world of humans, even though the humans act completely normally. The mice have a little gathering area before they board the boat to America, complete with little mouse banners and a little mouse band, but nobody thinks this is odd? The Mousekewitz family lives in the baseboards of a human family (named Moskowitz, which just raises further questions), but they have a door and glass windows and their name written outside. Is this relationship parasitic or symbiotic? WHAT IS HAPPENING?

Further making it like the Rescuers is the international parade of stereotypes, including, among others, an Italian Mouse whose mama was-a killed by-a da Mafia, and an Irish Mouse who appears drunk, sings an overly maudlin song, and seems to have built a burial mound. Bluth is really aping the Rescuers hard in this, which is odd, as that’s one of the crummy films that drove him away from Disney. Though it was also the one where he, as animation director, had the most creative freedom, so maybe that was all him. I don’t know.

But the other issues the film has are more objective. Even if I had been able to get past the mouse world issues more quickly, there’s still the fact that the film opens with a pogrom. It’s a shockingly violent opening to a children’s film, and as I watched, I couldn’t help but think of Fiddler on the Roof. When the pogrom comes in that movie, it’s after a long setup of the political situation, the persecution of the Jews, the character of the Cossacks - Here, it’s just random violence without context, making it look like they were leaving Russia because it’s full of freaking werewolves. And that’s barely a joke. The Cossack cats - who wear big furry Cossack hats because of course they do - snarl and roar like wolves and, somewhat more justifiably, lions. There’s no context, it’s just “CATS ARE EVIL”.

Obviously, I’m not saying that the Cossacks were justified in what they did, I’m saying that there’s a way to tell this story without simplifying it to the point of nonsense. Ebert observed in his review that the film’s target audience would neither know nor care that the Mousekewitzes were Jewish, and that’s emblematic of a basic problem with the writing. It’s so obsessed with putting this kid and his family through every single bad thing that could happen to an immigrant in the 1890s that they never take time to actually go into any of it. There’s a scene where Feivel is sold to a sweatshop, but he escapes in the next scene with no trouble and we never even see him working. There’s a scene towards the end where he winds up homeless and angrily declares that he’s giving up on his family, and then he IMMEDIATELY hears them calling him and runs to them. His total time on the streets is like 15 minutes. It’s a hard knock life.

And the story in general suffers from this same flaw of compression. Everything is so crammed in. We don’t get a sense of what the villain is like, we see almost no personality from anyone, and the nine millionth time Feivel narrowly misses seeing his family, it loses some zest. A messy story is fine with strong characters (as we’ll see in All Dogs Go To Heaven) and dull characters are fine with a strong story (as we’ll see in The Land Before Time), but this movie gives up barely-there characters and a plot that takes no time for making sense.

The animation is good, but even there you can see cut corners. Sadly, I have to blame Spielberg for a lot of this. Never having produced animation before, he wanted to see dailies and request changes like he would on a live-action film, and that resulted in some fairly choppy quality. Bluth was, for the first time in his solo career, unable to complete storyboarding on his own, and had to use assistants. Fudd flags pop up all over the place, more obvious than even in the cheapest of Disney films. The cels and backgrounds seem at times to be completely separated. There are some good points, I will say. The character design is VERY strong, particularly in the aforementioned terribly-written villain, whose animation and voice won me over quite a bit. The occasional human characters are rotoscoped, which is another example of Bluth compromising artistically, as he’s not a fan. But it actually works here, emphasizing the difference between the human and animal in a film that desperately needed some difference there. And the scene where Feivel is swept out to sea has some excellent animation on the waves, giving them a slightly human shape as they crest but having it collapse into a torrent of unstoppable water as soon as they break.

So there’s good and bad in the animation. but the songs are uniformly awful. There’s this one, perhaps you’ve heard of it? “Somewhere Out There”? It’s a horrible piece of treacle - wait, does treacle come in pieces? What is treacle? Anyway, it’s a horrible... unit of treacle sung by two annoying child actors. It’s less than two minutes long, and rhymes “tonight” with “moonlight”. Despite these and more shortcomings, it managed to win an Oscar and a Grammy for best song, so I don’t even know any more. Apart from that, the music tends to be dull, repetitive, and overwritten. I will admit a grudging fondness for “There Are No Cats in America”, though. I don’t know why. Maybe my time with Disney has left me with some sort of ethnic stereotype Stockholm syndrome.

This is all not to say that it’s an entirely bad movie. Far from it. It’s one of those where even though every specific thing I can think of about it is some form of criticism, the movie as a whole is still really enjoyable. You can see Spielberg’s hand as a producer in the contrived yet effective way the movie yanks at the heartstrings, and Bluth’s hand as a director in the strong tone of the film. He may have had to take a less active hand than he likes, but you can still feel his work throughout the movie, and that consistency glues together a lot of cracks. There are also a couple of legitimately good characters. Feivel’s father, played by Israeli actor Nehemiah Persoff, is a wonderfully loving and warm character, and Tony Toponi is a second generation Noo Yawk mouse who’s just a bundle of stereotypes and I LOVE IT.

The other voices are also generally fine. Feivel is just annoying as hell, but he’s a child actor, so we put up with it. Dom DeLuise turns up again, as a cat character of relatively little consequence who seems to mostly be there to apologize for this film’s blatant anti-cat agenda. He’s good, but his patented nervous chatterbox routine wears a bit thin, especially so soon after NIMH, where he did the same thing, only as a bird. Maybe next we’ll see him do it as a dog. (FORESHADOWING?) Christopher Plummer plays a French pigeon with a lot more dedication than the role deserves, and Madeline Khan phones in a role as a wealthy dowager, but Madeline Khan’s ‘phoning in’ is everyone else’s ‘110%’. The villain Warren T. Rat and his cockroach henchman are played by John Finnegan and Will Ryan respectively, both of whom do great work with lousy characters. Finnegan does particularly well, given that his character as written is annoying and almost nonsensical, but as performed is rather charming and enjoyable.

So yeah, this might sound a bit odd after what I’ve had to say, but I’d still recommend you see this. It’s mostly lousy, but with a wonderful heart to it. Great voice work, great design, and a lousy script makes for a surprisingly good time in this case.
ADDITIONAL THOUGHTS:

* McDonald’s had a series of advertisements in the 1986 holiday season which showed the Mousekewitz family celebrating Christmas. It’s like they didn’t even watch the movie. Actually, a Russian/Jewish friend informs me that the decorated tree is actually a New Year’s thing over there, likewise Santa (Ded Moroz, or Grandfather Frost), stockings, and all that stuff, so Jews would likely have all that. But I doubt the marketing department at McDonald’s knew that.

* Feivel’s pants are constantly falling down, which is particularly strange because he wears a belt.

* Understandably, the pun in the title didn’t translate into other languages. The Spanish version was just called Un cuento americano, or “An American Tale”, and the French was Feivel et le Nouveau Monde, or “Feivel and the New World”. The Germans, however, got clever, calling it “Feivel der Mauswanderer”. See, ‘auswanderer’ is German of immigrant, and ‘maus’ is - well, you can probably guess.

* Speaking of Maus, Art Spiegelman considered a lawsuit because he had been serially publishing the now-classic comic book “Maus”, a biography of his Holocaust survivor father that depicted Jews with mouse heads and Nazis with cat heads, for several years when this movie came out. Really, the works have almost no similarities, and rather than a lawsuit, he wisely moved to publish the collected edition in two volumes to beat the movie’s release date. Anyway, he wound up winning a Pulitzer prize for the comic in 1992, and this just got a Grammy for its terrible song, so he definitely came out on top.

* Somewhere Out There may be an awful song, but the video, a story of star-crossed animators who long for each other, though they are separated by... a hallway? Is hilarous. And contains mid-80s Linda Ronstadt.

* Also, this scene from Community, which is nothing short of perfect.
Posted by The blogger at 6:46 PM