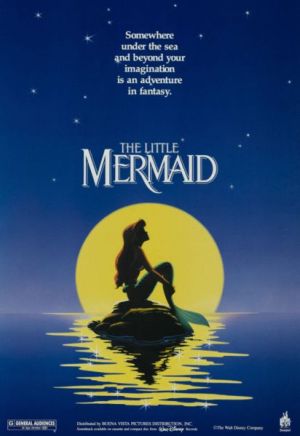 I want to make one thing clear here, because I’m going to be complaining a lot. I do like this movie. It’s very well made, it’s deservedly a classic. In fact, it was the first movie since the inception of home video to get its first home release under the “Disney Classics” banner. And it’s earned it. I love it, it’s great, I am not disparaging it.

Well, that’s it, isn’t it? In my head, there’s a lot of but in this movie. Of all the things I can think of to say about it, there’s a little voice of doubt in my head tempering it. I don’t deny that it’s important in Disney history, nor that it’s very good, but it’s a bit… Overrated isn’t the right word, I guess. But The Great Mouse Detective brought back quality, Oliver and Company brought back the music, The Little Mermaid brought back… Well, massive success. And better music. And princesses.


Take the music for example. If there’s one thing everyone knows about this movie it’s that it has great songs, right? Hell yes, it’s by Alan Menken and Howard Ashman, the creators of “Little Shop of Horrors”, and they made some classics. “Kiss the Girl”, “Under the Sea”, “Part of Your World”, and of course that great villain song, “Poor Unfortunate Souls”. There’s also a fun, if unnecessary song called “Les Poissons”, sung by the castle chef. BUT: their two stabs at introductory songs, “Fathoms Below” and “Daughters of Triton” are forgettable, the score is lackluster, and the integration of song and story is not always that good. And the good song that won the Best Song Oscar was the worst of the four. “Under the Sea” is fun, but it’s sort of stuck in awkwardly much later in the movie than it should have come, and the others are way better.

But still, mostly good there. How about the actors? They’ve been on a good kick there. Well, there’s certainly some standouts. Samuel Wright as Sebastian, the unaccountably Carribean crab, is really good, and sings the two award-nominated songs. Pat Carroll is deliciously evil as the villainous Ursula, and Rene Auberjonois is fantastic as always as the deranged chef. BUT: Everyone else is kinda generic. In the case of Ariel, played by stage actress Jodi Benson, I’ll give her the benefit of the doubt, because I think she only comes off as generic because her voice became the model for “cartoon princess” after this, and she really is quite good. But her dad and love interest are the most generic choices possible. King Triton is Ken Mars, who has pretty much two voices, the psychotic German, which is great, and the stern yet loving dad, which is bland. Guess which one he used here.

Prince Eric is Christopher Barnes, who is so generic he sounds like the 1990s cartoon Spider-Man. In fact, he was, but I didn’t know that, because it’s impossible to listen to his voice and remember where you recognize it from because you DON’T, because it is BORING. Flounder is a generic teenager, Grimsby’s a generic butler, the maid is Edie McClurg, and you know what you’re getting with her. And the voices of Flotsam and Jetsam, Ursula’s servants, just confused me. They’re played by a woman, they speak in clearly female voices, but Ursula refers to them as “Boys” whenever she talks to them. It’s just weird.

Okay, so what about the story? Well, I’ll say this, it’s certainly nice and tight. There’s hardly any filler, and the story flows so smoothly I was amazed that it’s actually a bit on the longish side for these, at 83 minutes. And the basic beats of the story all hit, and I had a very enjoyable time while watching it. I also loved that for the first time, we see an actual relationship building. I mean, it’s only three days, but you remember how pleased I was in Sleeping Beauty when they had so much as a single conversation before falling in Twoo Wuv. And it’s also great that Eric initially has this fairy tale idea of romance and is hurt when he thinks Ariel isn’t the woman he met on the beach, and then actually grows to have feelings for her on her own merits. BUT: Pretty much as soon as it ended, I was struck with a load of problems I hadn’t noticed while it was on, which I shall now detail in my beloved bulleted list format.


* Ariel is willing to trade her voice for compatible organs with a man she’s never really met. Then her dad gives his freedom and his powers for her, then her boyfriend saves him, then she gets what she wanted. She has no arc, no growth as a character. I’m not too bothered about this one, because she should have been allowed to follow her dreams in the first place - or should she?

* The reason Ariel’s father is so opposed to her joining the human world is because they routinely haul fish out of the ocean and eat them, apparently unaware that all fish are sentient. (Except maybe the shark, but that’s another problem.) And when we get out of the water, it seems that the entire economy of Eric’s little seaside principality is based on their fishing industry, and the castle’s kitchen is basically a fish torture chamber. This is never addressed.

* I say principality rather than kingdom, because unlike Phillip and Charming, Prince Eric seems to have no father. Nor does he seem to do any governing, for that matter. And he just walks around downtown with no guards like he’s Christian X or something.

* Or maybe it is a kingdom, but he doesn’t get to be king until he puts a proper shirt on.

* A couple of years ago, I had a fairly severe laryngitis that left me mostly mute for about a week. It took all of six seconds to work out a simple charade for “I’m usually able to talk, but I can’t now. Sorry.” A little effort, Ariel, and we can clear this whole thing up before the halfway point.

* And I was willing to forgive her for not just writing it down, on the assumption that Merfolk have a different language, or are illiterate, what with writing being impractical underwater. But then my friend reminded me that she SIGNS HER OWN NAME to Ursula’s contract.

* What was Ursula’s evil plan, anyway? Screw with Triton’s daughter, get him to sign his life away to save her, steal his magic hat (?), grow gigantic, and… Then what?

* They have a boat just for weddings?

* The Wikipedia article for this movie contains the phrase “Closeup of the alleged penis”, and that’s all we’ll say on that matter, I should think.

* Two entries for the “I forget what the note I made while watching means” category: The first is “Black”. Possibilities: Ursula’s disguised hair color? Something in the animation? A reminder to download Michael Ian Black’s new book?

* The opening scene contains among its “additional voices” none other than Mark Hamill and Tim Curry, unrecognizably playing random sailors. Awesome.


Wait, that plot problems bulleted list seems to have accidentally segued into the usual “Additional Thoughts” section. Oh well, I’ve said what I need to. Look, this is a very good movie. It just has all these little bits that cause me to see it with a bit of trepidation. It’s a great movie on its own, but all the elements they need are not quite there yet. Anyway, I’m sure their next film will get it. It’s another big musical based on a classic fairy tale, right? Wait, what?