When I was compiling by Best Songs list, I ran into real trouble in the back half deciding between the villain songs and other songs in several movies. Eventually I decided the reason for this was that villain songs serve a different need for both the story and the audience, and to make things easier on myself, I decided to make a third list. So here you are, the best songs by or about villains! 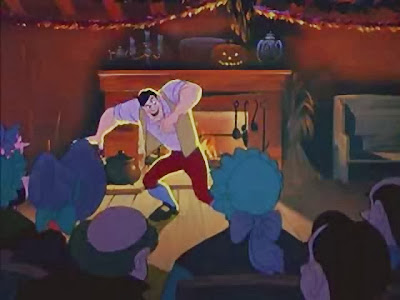 I was surprised that a lot of the early films didn’t really feature villain songs. This is the first one with a really villainous tone, and it works very well. And the swingy '40s style works well, even if it doesn't fit the setting that well. It has the misfortune of being sung by Bing Crosby, but I can fix that for you.

The Elegant Captain Hook
Music by Sammy Cahn, Lyrics by Sammy Fain
Performed by the Disney studio chorus and Hans Conreid as Captain Hook
As a special offer for today
I'll tell you what I'll do.
All those who sign without delay
Will get a free tattoo! 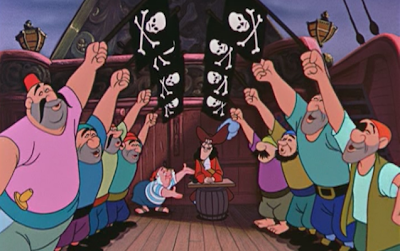 A balance of the threatening and innocuous is a great way to describe Never Land in general, and this song really embraces that. A sales pitch and death threat all in one, with Hans Conreid hamming it up. As I said before, Hook was the only part of this movie that I really liked, and I’m glad his song is so catchy. 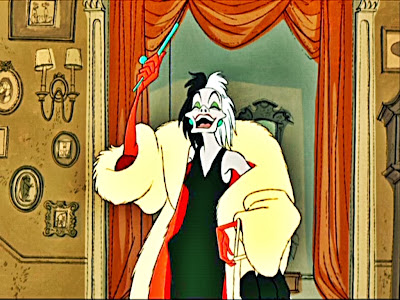 One of the best on the list, and the only song in an almost entirely non-musical movie. Not only is it wonderfully moody and funny, it establishes the character of Roger perfectly, and the way he continues to play the song upstairs throughout the scene is hilarious.

Trust in Me
Music and lyrics by the Sherman Brothers
Performed by Sterling Holloway as Kaa
Trussst in me
Jussst in me
Shut your eyesss
And go to sssleep
You can sssleep sssafe and sssound
Knowing I am around. 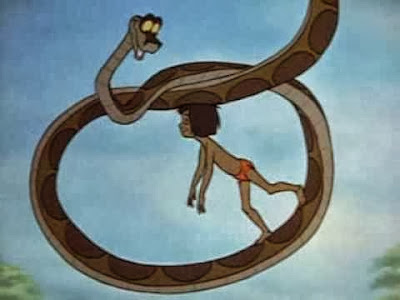 I never would have expected Sterling Holloway to be able to pull off “scary”, but he remarkably manages it here, even in the role of a largely comic relief villain. His tweedy, soft voice carries the hypnotic feel of the character in a delightfully creepy way.

Goodbye So Soon
Music by Henry Mancini, Lyrics by Larry Grossman and Ellen Fitzhugh
Performed by Vincent Price as Ratigan
You followed me, I followed you
We were like each other’s shadows for a while
Now we can see this game is through
So although it hurts, I’ll try to smile 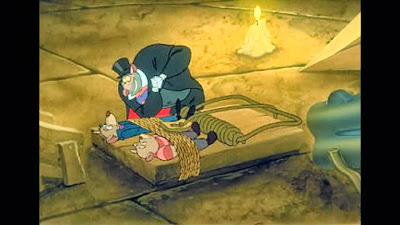 Speaking of delightfully creepy, Vincent Price! “The villain puts the hero in a death trap and leaves” is such an overdone cliché, but I love the way it was done here, with the five or six different death traps, the camera to capture the blessed event, and the fact that the trap was triggered by the arm of a record player playing this specially recorded farewell song. The song plays mainly in the background, which makes the few times it comes to the surface hilariously incongruous with the deadly danger.

Poor Unfortunate Souls
Music by Alan Menken, lyrics by Howard Ashman
Performed by Pat Carroll as Ursula
Those poor, unfortunate souls
In pain, in need
This one longing to be thinner, that one wants to get the girl
And do I help them?
Yes indeed. 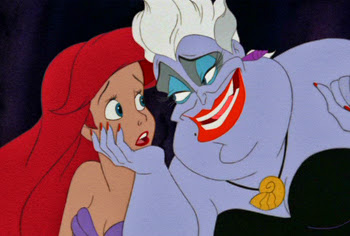 It’s a both nostalgic and an objective fact that the Renaissance was when the music got really good, and right out of the gate, they give us one of their all-time greatest villain songs. The lyrics are wonderful in that “oh, I’m so misunderstood, now SELL YOUR SOUL TO ME” way, and Pat Carroll performs the hell out of it. And those creepy little victim-shrimp watching and writhing in pain really drive it home.

Gaston
Music by Alan Menken, lyrics by Howard Ashman
Performed by Jessi Corti as LeFou, and Richard White as Gaston
No one shoots like Gaston
Makes those beauts like Gaston
Then goes stomping around wearing boots like Gaston! 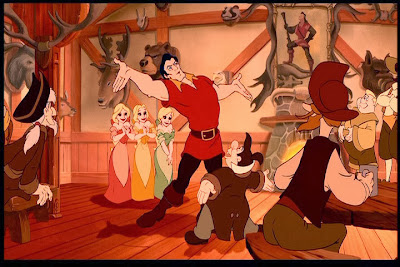 Beauty and the Beast has two villain songs, and while the more traditionally nasty “Mob Song” almost made the list, I had to give the point to this song, where the townsfolk sing Gaston’s praises. It’s a great character piece that shows just what a likeable person Gaston is to the town, even though we can still see him as a jackass. And Ashman’s lyrics are really on point, though the more clever rhymes do give the famously anti-intellectual Gaston a surprisingly robust vocabulary. For bonus fun, check out the album version, which adds an extra bit to the end.

Be Prepared
Music by Elton John, Lyrics by Tim Rice
Performed by Jeremy Irons and Jim Cummings as Scar
I know it sounds sordid
But you’ll be rewarded
When at last I am given my due
An injustice deliciously squared
Be prepared!

This is one of my favorite movies about Jeremy Irons trying to take over a kingdom, second only to Dungeons and Dragons, so how could I not give the point to him singing about it? Music and lyrics are good, but it’s the performance that really sells this one, even if he does start to sound like Darkwing Duck at the end. The Nazi imagery is a little weird, though.

Mine Mine Mine
Music by Alan Menken, Lyrics by Stephen Schwartz
Performed by David Ogden Stiers as Radcliffe and Wiggins and Mel Gibson as John Smith
It’s mine, boys, mine for the taking
So mine, boys, mine me that gold
With those nuggets dug, it’s
Glory they’ll gimme, my dear friend King Jimmy
Will probably build me a shrine 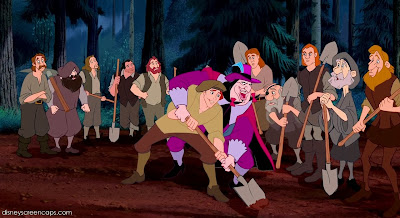 Not remotely a good movie, but I do enjoy this song, which counterpoints Radcliffe’s greed for the land’s resources with Smith’s fetishization of the land itself as an adventure for him to have, a nice subtle thing which I think was probably accidental, because this movie is terrible. But this song is a lot of fun in its gleeful abandon, despite what I said last time about Schwartz not doing whimsy well. It helps that Stiers is one of those actors who elevates the material by his mere presence, and since he plays his own assistant, you get to hear him sing counterpoint to himself. And Gibson just tries his darndest, bless him. Listen to him try. He's almost good.

Hellfire
Music by Alan Menken, Lyrics by Stephen Schwartz
Performed by Tony Jay as Frollo
Like fire!
Hellfire!
This fire in my skin
This burning
Desire
Is turning me to sin 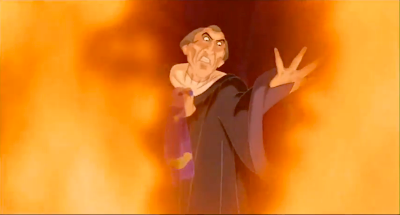 Whimsy may not be Schwartz’s forte, but portentous, overdramatic anguish redeemably is, and when paired with Menken at his most… MOST,  holy cow, this song is amazing. Magnificently sung by Tony Jay, this dark hymn to lust, obsession, and shame is rightly famous as the song that makes people say, “Wait, this is Disney?” And it follows immediately after a sweet and innocent song and a little religious interlude, which really lulls us into a false sense of peace.

Perfect World
Music by Sting and David Hartley, Lyrics by Sting
Performed by Tom Jones as Theme Song Guy
He’s the sovereign lord of the nation
He’s the hippest cat in creation
He’s the alpha the omega, A to Z
And this perfect world will spin
Upon his every little whim
‘Cause his perfect world begins and ends with - ME! 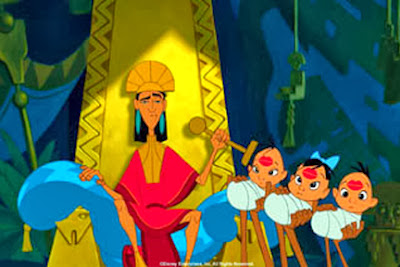 Not a lot of people would think of this song. For one thing, it’s the only song in an otherwise totally non-musical movie. For another, Yzma, not Kuzco, is the film’s villain. But he certainly is an antagonist at the beginning, and a song which fully sets up his utterly self-centered worldview is a great way to establish him. Plus, he has an old guy thrown out the window.

Yodel-addle-eedle-idle-oo
Music by Alan Menken, Lyrics by Glenn Slater
Performed by Randy Quaid, Randy Erwin, and Kerry Christensen as Alameda Slim, with David Burnham, Jason Graae and Gregory Jbara as the Willie Brothers
They call me mean, boys
Depraved and nasty too
And they ain't seen, boys
The cruelest thing I do 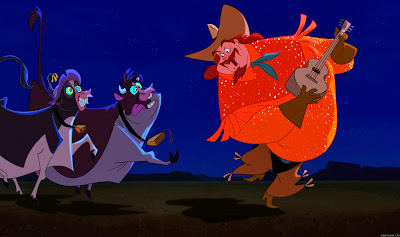 Aladdin was a diamond in the rough. This song is a diamond in a heap of cow crap. In the middle of one of Disney’s most limp and uninspired movies, we get this delightful little number with fun animation, infectious energy, and some very fine yodeling, though I was misinformed when I said in the review that it was all Randy Quaid. He did the stuff in the verses proper, but the really complex stuff in the bridge was two other guys. Oh well. Still a good song. Pity they couldn’t keep it going. 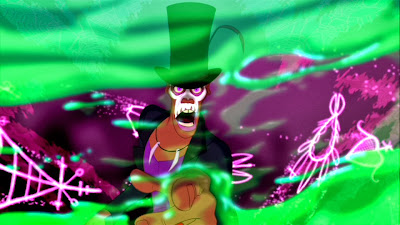 Keith David’s is one of the greatest voices of all time. When he plays a smooth operator, it’s like velvet butter. Wait, that would taste terrible. No, that’s okay, because he’s playing a bad guy. Anyway, along the same lines as “Poor Unfortunate Souls”, this song involves the villain convincing the hero to do something that is a very, very bad idea. But while Ursula approached Ariel with the brash manner of a used car salesman, Dr. Facillier approaches Naveen like a seducer. And it works marvelously. Because Keith David.