Throughout the (ahem) year of Disney, I noticed an trend of people recalling the nostalgic Disney films from their childhood - A lot of them weren’t by Disney. They were by Don Bluth, by Warner Bros., by some independent company, etc, but people remembered them in the broad mental category of “Disney Movies”. And that does make a bit of sense. While there were various studios supplying our childhood animated classics, the name-recognition of Disney does rather have a way of taking over the memory. TV Tropes even has an article about it, because of course it does. 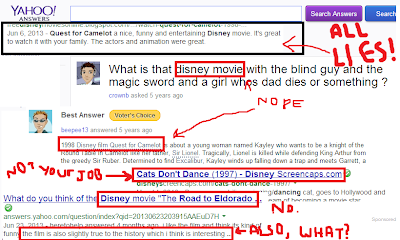 At first, I didn’t take much notice of this, but after a while, it did get me thinking about all the studios that have tried to take on Disney over the years. Often at times when the company was putting on a weak showing, other companies have pushed out slates of animated movies to grab that market share for themselves, and that’s what we’ll be looking at this year.

We’ll begin with the various attempts by Disney’s old rivals in the animated shorts department, Warner Bros., first with their late-90s feature animation division, then their earlier partnership with Ted Turner. We’ll then look at the complete works of former Disney animator Don Bluth’s independent studio, which includes our only direct-to-video piece. Then a few more Warner-distributed things, before moving to Steven Spielberg’s brief foray into the game with the horribly-named “Amblimation”. We’ll look next at the early 2D work of Spielberg’s far more successful company Dreamworks, then jet back to the 1970s, where Golan and Golobus, who despite their names are somehow not supervillains, loaded their legendary egos into Cannon Movie Tales, the first-ever blatant attack on Disney’s market. After a brief miscellaneous round, we’ll look at the feature films of TV cartoon moguls Hanna-Barbera and holiday special specialists Rankin/Bass.

The end of the volume will take us back to Disney, looking first at their live-action/animation mixes, and then at some animated films they paid for, but didn’t themselves produce.

I’m not guaranteeing reviews for all of these. Some of them, specifically the mid-70s stuff, I’m not even sure have been released on DVD. But this is the current plan, with a few bonus films thrown in along the way.

THE FILMS OF DON BLUTH

An American Tail 2
We're Back!
Balto

The Road to El Dorado
Spirit: Stallion of the Cimmaron
The Prince of Egypt
Sinbad: Legend of the Seven Seas

BONUS ROUND - JUST SOME STUFF I FEEL LIKE REVIEWING

Tom and Jerry: The Movie
Little Nemo in Slumberland
Ferngully
The Swan Princess
All Dogs Go To Heaven 2
The Brave Little Toaster

Hey There, It's Yogi Bear
The Man Called Flintstone
Charlotte's Web
C.H.O.M.P.S.
Heidi's Song
Go Bots: Battle of the Rock Lords
Jetsons: The Movie
Once Upon a Forest

The Nightmare Before Christmas
James and the Giant Peach
Frankenweenie
Mars Needs Moms
A Christmas Carol
Posted by Brian Lynch at 1:14 PM