So after one bad movie that did poorly, and one great movie that also did poorly, you’d think Warner Bros. might look at their recent decisions and spot some patterns. See, the film that was made with little involvement from the executives was critically successful and hailed by many as brilliant. The film that they poured the marketing into, though, did better financially, despite being the worse movie. Clearly, the key to getting a good movie would be to stay very hands-off and trust the creative team, and market the hell out of it. So they did the exact opposite. Perhaps they thought that since their instincts had been 100% wrong so far, they should forego the obvious decision and instead do the bad idea, and micromanage a movie into mediocrity and then not tell anyone they made it? Solid choices, folks. 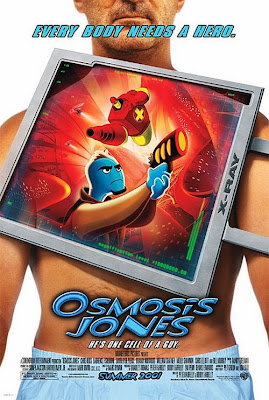 Osmosis Jones is not one movie, and that’s the main problem. It’s two main movies, with a lot of random threads of other ones glommed onto it. The best part of it, and what it was sold as, is a stylish parody of buddy cop movies. Just like a typical cop movie, the streetwise cop born and raised in the mean streets of the city is paired with a no-nonsense, by-the-book transfer. They conflict at first, there’s some major setbacks, they get in trouble with the authorities, and in the end, their complementary styles work out, and they take down the big underworld boss.

The major change in this case is that the city is a guy called Frank, the city cop is a white blood cell, the transfer is a cold pill, and the underworld boss is a viral infection. The obstructive mayor is a brain cell, the shady informant is a former flu shot, the hero’s love interest is a hormone, the scummy criminal hangouts are foot fungus and zits, etcetera. This is, for the most part, quite well done. There’s loads of ridiculous puns about the body parts, and ridiculous puns are my favorite. And the action is solid, as the virus appearing as a mild cold before striking at the nervous system is relayed into a plot where the new criminal in town takes over the small-time rackets first before moving to the big game.

The voice casting is very good, too, with Chris Rock as the blood cell Jones and David Hyde Pierce as the cold pill Drixenol, or “Drix” with Laurence Fishburne as Thrax, aka “The Red Death,” a virus threatening Frank’s life. Fishburne played a lot of interesting psychopathic thugs throughout the 90s, and if you only know him as Modern Laurence Fishburne, who mostly plays tough yet reasonable authority figures who yell at white people until they do their jobs better, you might not even recognize him. Rock and Pierce, on the other hand, have unmistakable voices, but Rock takes to voice work very well, and Pierce, of course, is one of the greatest voice actors out there. It‘s fun to hear them both in action hero roles, which their scrawny frames keep them from in live action films. William Shatner gives a good, if somewhat bland performance as the self-involved mayor, as does Brandy Norwood as his assistant, Leah. Leah is also Jones’ love interest, and while she’s a generically underwritten female character, I do like that they wrote the two of them as having an already existing flirty and somewhat adversarial relationship, since it made the fairly perfunctory romance subplot feel like it had some depth.

The animation is fine, too. It’s not up to Iron Giant levels, but it’s still good work. The organic curves and shapes of the City of Frank look suitably biological, and the elastic nature of the cellular characters allows for some fun stretching gags. Drix is cel-shaded computer animation, used again to great effect to highlight his artificial nature. The viruses are done with a different style of movement and design from the cells, and the design of Thrax in particular is very nice, as is the effects animation in the various big set pieces (allergy attack, vomit, zit popping).


So yeah, all in all, a really solid animated movie. Not always the most cohesive or mature, but with enough high spirits and fun to gloss over any flaws and leave me, the viewer, happy. But like I said, it’s not just one movie. It’s two. And the other one is a damn mess. Because they didn’t think the clever and creative cartoon would work for the masses. So they decided it needed more gross-out toilet humor, delivered via live-action scenes showing Frank, the body that Jones was a part of. And to direct their gross-out humor, they turned to the masters, Peter and Bobby Farrelly.

Now, you have to understand, at this point, the Farrellys were not the godawful sinkhole of creativity and taste they would eventually (like, in a year or so) become. When they were hired for this, they had directed only three movies. The reasonably clever and funny Dumb and Dumber, the pretty okay Kingpin, and the actually very good There’s Something About Mary. So the notion that they would bring a little crude spark to this movie was not entirely without merit.

The problem is, their lowbrow poops and farts style is so at odds with the winking and witty tone of the animated stuff, the two movies don’t mesh at all. And while it might be fine to cut to a live-action gag every once in a while, and some of them are admittedly funny - Frank gets sick initially after eating a hard-boiled egg that was dropped on the ground and then almost eaten by a chimpanzee - they attempt to give the live action segments their own dramatic stakes by having Frank’s young daughter concerned for his health following the recent death of her mother due to an unhealthy lifestyle. I cannot understate how little I care about this, or about the girl's camping trip she wants to take. And when they're not being overreachingly earnest, the live segments have this really small, mean, depressing feel to them. Compounding the weirdness, the script seems to think that Frank and his daughter are fat, but she’s played by a tiny wisp of a thing, and he’s played by…


Oh, Bill, how could you? I don’t think it’s overstepping it at all to say that Bill Murray is one of the most gifted comedic actors in America, but he does not need to be doing this. There’s something kind of depressing about seeing him doing this material, when you know he didn’t need the money. Because we all know that when Bill Murray is really capable of phoning it in, and for the most part, that’s what he does here. The gags might land better if he was invested, but it’s obvious he couldn’t care less. While watching it, I started thinking of other actors that could play the part better, and Chris Elliot came to mind. He usually looks pretty scummy and unhealthy, he’s able to work well with bad material, he knows the directors already, and he’s not famous enough to turn down parts. This line of thought became even more annoying when I got a few scenes further in and it turns out he’s playing Frank’s brother.

So yeah, wasted talent, cheap, poorly-done sentimentality, and an intense feeling of mood whiplash due to the complete tonal disconnect with the animated portions. But despite the live-action error, I still recommend this movie. The live action stuff does drag down the overall rating, but the animated portions are still really well made and entertaining. It may not be a very good movie, but it’s got enough going on to say it’s worth the hour and change it takes to watch.


* At one point, a character in one of the live segments says “hypotenuse” when they mean “hypothesis”, and I can’t tell if it was supposed to be a joke, and that makes me SO ANGRY.

* At one point, Jones calls Leah “Brandy”, and… That’s it. Is that just because she’s played by Brandy? Or is there a joke I’m missing there? Because if the whole gag is “Character uses an actor’s name instead of the other character’s”, that might be the worst joke I’ve ever heard.

* “There’s been a Jones on the force ever since my ancestors came over on the umbilical cord.”


* Following this, the Farrelly brothers made Shallow Hal, Fever Pitch, a remake of The Heartbreak Kid for some reason... Basically nothing but hot garbage. And that Three Stooges movie which was pretty okay.

* If you’d like to learn more about artistic brothers named Peter and Bobby, please observe this vastly more creative and talented set. They're twins, which makes them objectively better, they have funnier voices, and while they haven't made a Three Stooges movie, I have seen them set fire to an old lady's rug while trying to wash a cat.