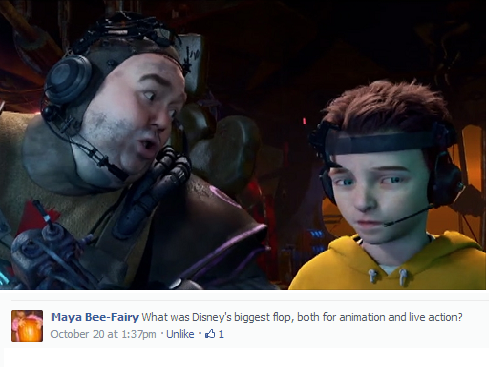 An interesting question with an interesting answer. While the Disney canon has a few flops, this is a company that, for their animated films at least, considers “only tripled its budget” to be a flop. There have been a few that didn’t make their money back, but only one really joins the pantheon of legendary money losers, and that’s Treasure Planet, which lost the studio about 80 million dollars. That doesn’t compare to their biggest live-action flops, like John Carter, which banked on a charmless lead and source material no one’s heard of, and The Lone Ranger, which banked on racism and source material no one cares about. Both of these films lost over 100 million, with estimates for Lone Ranger as high as 120 million (though it’ll be hard to say for sure until its out of theaters a bit longer).

The interesting bit is that Disney is also responsible for the biggest flop of all time, and it’s an animated movie. Just not one of their canon. Through ImageMovers Digital, a partner company, Disney produced a film called Mars Needs Moms to the tune of 150 million dollars. Not only was the film a pile of junk, the advertising budget was comparatively tiny. Which is too bad, because if they had spent a lot trying to sell it, it may have actually had losses larger than its budget. As it is, it made 40 million in theaters, leading to a net loss of 130 million. Mars Needs Moms is currently slated as the final film of Volume 2. I’m looking forward to it. 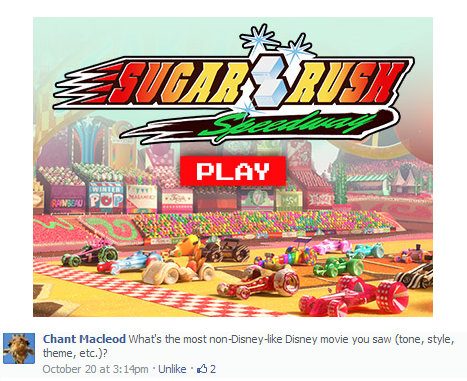 I was surprised as I went through the list just how malleable a concept “feels like Disney” turned out to be. The… emotional beat of the company, for lack of a better term, permeated nearly everything they did. There were points where it was weaker - the compilation films, the Rescuers/Fox and the Hound/Black Cauldron period - but even so, in those groupings, the films still feel like each other, and that gives them a stronger connection to the Disney canon as a whole. So I’d have to give this one to a movie that not only has a different feel to it, but also stands on its own as a bit of an odd duck, and that’s Wreck-It Ralph. I mentioned in the review how it felt more like Pixar than Disney, and that’s all true. And since it’s surrounded by traditional princess musicals and a Winnie-the-Pooh flick, it stands out all the more. So while it’s still very good, that’s the one that feels the least like Disney. Though I have my suspicions Big Hero 6 may be dethroning it. 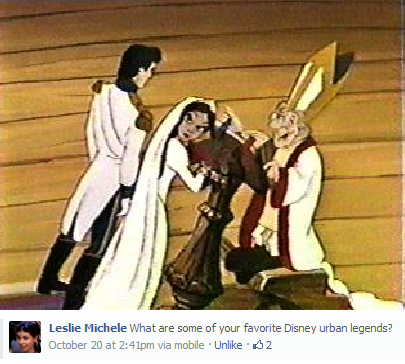 I don’t know, Walt’s head? I have a soft spot for the hysterical religious right panics of my childhood, of course, like Aladdin telling teenagers to take off their clothes, or the priest’s knee-boner in The Little Mermaid. I like the really inexplicable ones, like that no one is allowed to be declared dead at a Disney park, or that Walt’s will states that the first man to become pregnant will be given the entire company. But most of all, I like the true ones. Like the photo of the topless woman in The Rescuers, or that the documentary filmmakers herded lemmings off a cliff when nature failed to conform to their script. But of these turns-out-to-be-true legends, my all-time favorite is that Harlan Ellison was hired as a staff writer for Disney in the mid-60s, and was fired on his first day after Roy O. Disney heard him joking in the cafeteria that the company should make a porn. 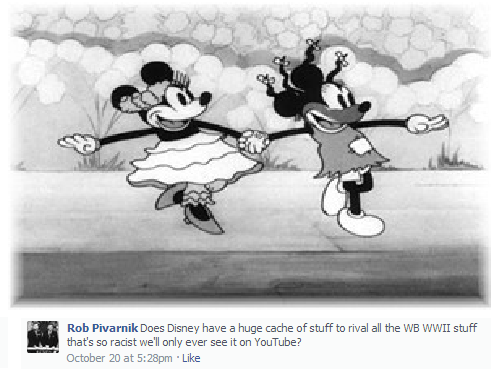 Not really. Disney was actually kind of good about that stuff. You know, given the times and all. They certainly weren’t free of stereotypes, as we’ve seen on this very blog. But I’ve never seen the kind of virulent, sincere, hateful racism from them that I’ve seen in the 1940s cartoons of Warner Bros., MGM, Leon Schlessinger, Famous Studios, etcetera. Most of the things you see linked online as “banned Disney cartoon” are more like “Disney cartoon they don’t show much because it’s about tin rationing or some stupid thing like that.” The only thing I’ve seen of theirs that really matches the racism of their contemporaries is Sunflower from Fantasia, and they’ve cut her out of there. There’s also the cartoon illustrated above, “Mickey’s Mellerdrammer” which… Ah, it’s on YouTube.

Incidentally, Warner has released a DVD of their wartime cartoons, with a contextual introduction from Whoopi Goldberg, and following the success of that, is planning on releasing a DVD of their “Censored 11” and other old offensive cartoons. Frankly, they shouldn’t, because they’re reeeeeeally racist, and frankly kind of terrible. I sought out “Coal Black and De Sebben Dwarfs” after seeing animation historians refer to it as a masterpiece and one of the greatest cartoons ever made, and Bob Clampett’s magnum opus and stuff like that. It’s not. Even if you are super good at compartmentalizing racim, it’s just an unfunny collection of tired, simple gags with overly frantic animation. AND A LOT OF RACISM. I have no idea what the historians are thinking. I guess they’re just overcorrecting, and trying to be edgy? 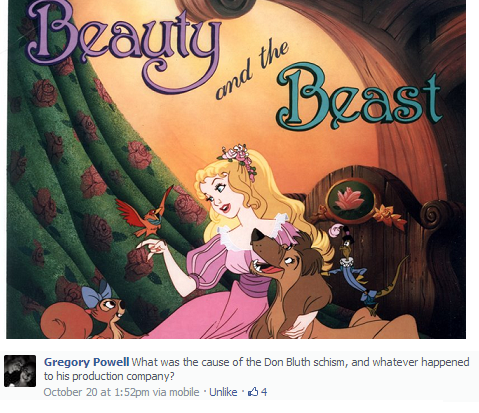 The cause of the schism is easy to see when you look at what Disney was making in the late 70s. Basically garbage. Disney was full of stifling older animators, a labyrinthine bureaucracy, and an uninspired creative team. So he left, taking John Pomeroy and more importantly Gary Goldman with him, as well as a short film they‘d made, which they shopped around to get funding. Sullivan Bluth Studios produced eight films, but declining quality and sales led the studio to close, and Bluth and Goldman accepted an offer to start Fox Animation Studios, which produced Bluth’s final two movies. Much more information will be available in Volume 2 of the blog, wherein I shall discuss the entire output of Sullivan Bluth and Fox Animation.

Incidentally, the Disney film that is generally agreed to have been the final straw for Bluth is Pete’s Dragon, which I will also be covering here. 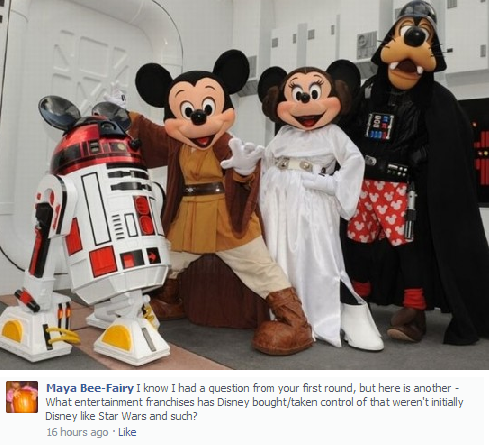 Well, in the Lucasfilm deal, they got not only Star Wars, but also Indiana Jones and a number of small franchises/titles, like Grim Fandango, Willow, Monkey Island… Um… Radioland Murders… That movie about Preston Tucker that nobody saw. There’s also Marvel, of course, and the Muppets, their two big acquisitions. They’ve bought Pixar outright, so all the Disney/Pixar characters are just plain Disney characters now. They acquired a terribly run yet fairly creative comic company, CrossGen, and are trying to think of something to do with those characters (the correct answer, as far as I'm concerned, is keep making Ruse and Abadazad, and dump the rest in a landfill). They own ABC, of course, so I assume they got some licenses with that. I know they bought distribution rights to a bunch of their old rivals in the shorts business, but I’m not sure what exactly. Actually, it’s hard to research this right now, since trying to research properties acquired by Disney just brings up pages on pages of articles on the Lucas deal. 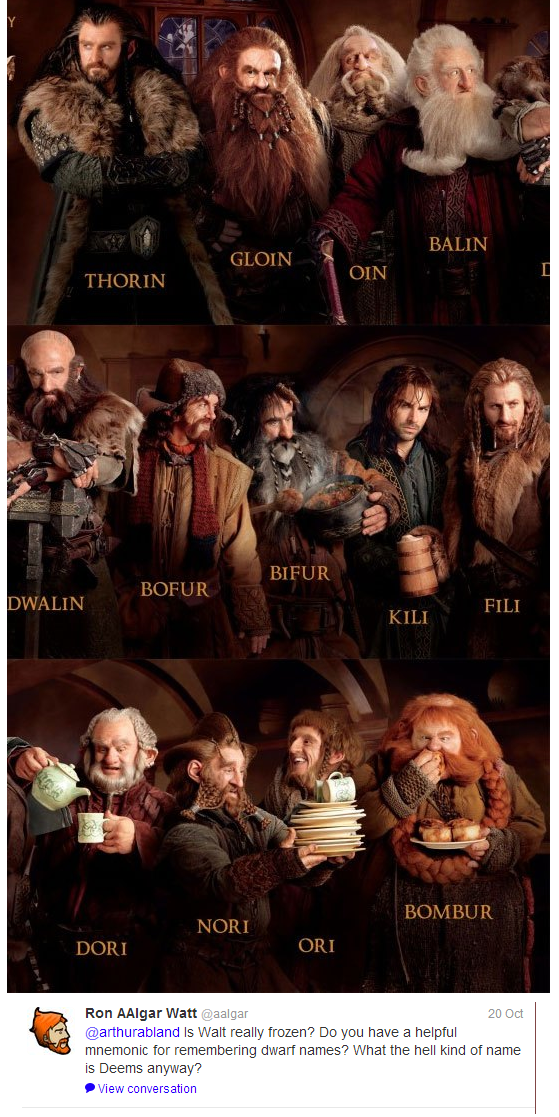 1 - No, he had planned to have his brain put into the robot body of Michael Eisner, but Dwight Frye dropped it on the ground and they had to use an evil, business-savvy potato who was really awkward at hosting TV specials.

2 - Honestly, I just remember them because of a TV ad for the 1994 VHS release of Snow White, wherein they showed a number of people being challenged to remember the dwarfs’ names. The “man on the street” nature of the ad was belied by the fact that everyone said them in the same order. Whoops. Anyway, that ad was on TV constantly, so that’s how I remember them, and if I were stopped on the street by a commercial-maker, I would say them in the same order. Self-fulfilling advertisement. 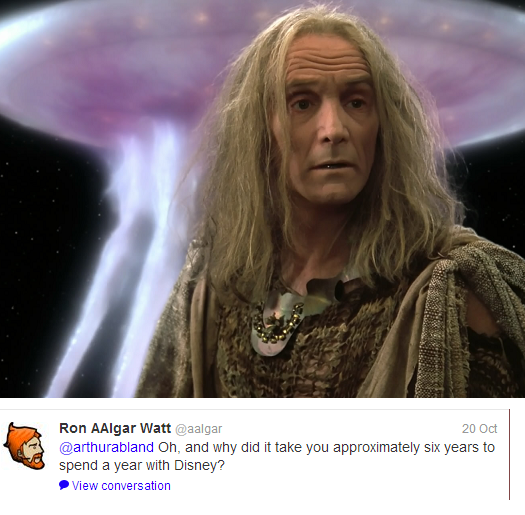 What gives you the right to cast aspersions on anyone’s scheduling - Oh, you produce, not one or two, but three high-quality podcasts on a regular basis? One of which has had an official panel at the Emerald City Comic Con? And that same podcast is one on which I am a frequent guest, and on which I will be appearing on next Monday, November 11th?

Thanks for your question, Aal! Happy birthday!
Posted by Brian Lynch at 7:28 PM