In 1986, Pete Townshend used it as the basis for a Tommy-style song cycle/rock opera/concept album.

In 1993, Warner bought the rights to this song cycle and started developing it as a movie.

In 1996, skilled animator and former Simpsons director Brad Bird was hired to direct the film.

Those five events are what led to what I feel comfortable calling, without hyperbole, the greatest animated film of all time.

YES IT ACTUALLY LIVES UP TO THAT HYPE! 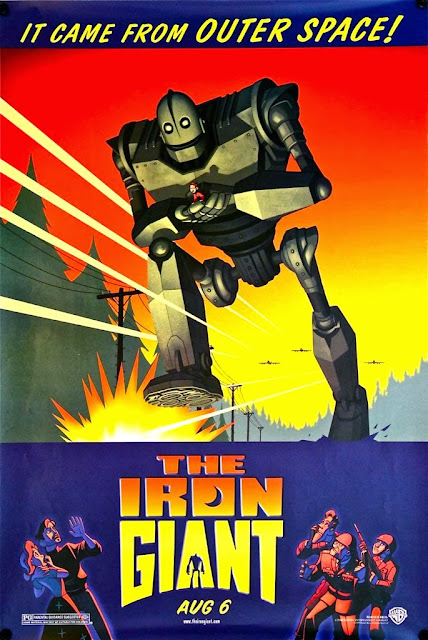 The Iron Man is a very odd book. I read it all in one sitting during a study hall period when I was in tenth grade. I don’t recall if I had seen the movie at that point. It had only come out some months previous, and I know I didn’t catch it in theaters. But whether I had or hadn’t, my reaction would have been the same: pleasant bafflement. While the writing is very good (Hughes was a poet laureate of England), the story is a bit all over the place. It concerns the sudden appearance of an enormous, metal-eating robot who drives a town into fear. A young boy named Hogarth helps them catch the robot, and when it escapes, leads it to a scrap yard where it can eat all it likes, eventually befriending the robot. That’s all fine. Things get a little weird when the Earth is terrorized by a Space-Bat-Angel-Dragon (that’s not me being snarky, it’s what it’s called in the book) who demands tribute in exchange for not destroying Australia. The Iron Man saves the earth by challenging the Space-Bat-Angel-Dragon to a heat-withstanding contest where it will lie on burning petrol while the SBAD lies on the sun, and they‘ll see who breaks first. Wait, it‘s not done. When the SBAD is finished, it has become tiny and no longer scary. It reveals that its job is to sing cosmic harmony and create peace through the galaxy, but the sounds of war on Earth corrupted it. Now that it has been humbled by the Iron Man, it remembers its past, and  sings a peace song that makes humanity realize that they are all family, and they end all war forever.

It’s no surprise that this story of a misunderstood and damaged outcast, the fear and prejudice of a panicked populace, and a lasting peace through music would draw the attention of Pete Townshend, guitar player for The Who and driving creative force behind Tommy, which dealt with similar themes. His album “The Iron Man: The Musical” was a hit, and like Tommy before it, led to stage productions and film adaptations. The film, set to the song “A Friend Is A Friend”, focuses on Hogarth and the Iron Man’s growing friendship, which is the far more adaptable part of the story, and the part that Brad Bird chose to focus on.


I don’t know much about the early development of the movie before Bird was hired, but it did begin as a straight adaptation of Townshend’s album, and Townshend, as well as Des McAnuff, co-writer of the Tommy stage musical, retains a producer credit in the final product. I presume, since his songs were originally to be used, that the Space-Bat-Angel-Dragon was included in early drafts. But Bird had a different directorial vision. He saw the strongest part of the movie as the friendship between Hogarth and the robot - who had been renamed the Iron Giant for obvious reasons - and the fearful reactions of the townsfolk. So now, Hogarth keeps the giant’s identity a secret, rather than the whole town finding out at once. In order to get the most benefit from the town’s paranoia, the movie was set in the 1950s, with a thick helping of nuclear panic informing the storyline. The cast was expanded, as well, with roles for Hogarth’s single mother Annie; Dean, the beatnik owner of the scrap yard who helps Hogarth hide the Giant; and Kent Mansley, an intimidating CIA agent who is convinced the Giant is a Soviet weapon, and moves into Hogarth‘s house as a lodger when he starts to suspect the boy. With this new plot and cast in place, Bird set about developing the story. Just as they were entering production, the best possible thing happened. Quest for Camelot tanked.

Suddenly Warner wasn’t so hot on animation anymore. The budget for The Iron Giant was trimmed, and production time cut dramatically short. Bird and his staff suddenly had to rush it out as quickly as possible. And - this is the good part - the executives basically started ignoring them. Bird now had free reign to make the movie as he wanted, free from studio interference. And what an amazing movie it is.

I can’t even imagine what this movie would have been if Warner Bros. cared about it at all. We saw the dirty hands of executive meddling all over Quest for Camelot, and it ruined any slim possibility of that being a good story. The Iron Giant has no funny sidekicks. The music is all orchestral soundtrack and digetic ‘50s pop. There are no jokes that rely on anachronistic references or situations. The ending is heartbreaking, and resolutions are not easily won. And Mansley is frankly terrifying. He gradually steps up his intensity throughout the movie until he’s literally threatening Hogarth in his own house while Annie unsuspectingly works the night shift. I can’t imagine a character like Mansley in a lot of kids’ movies. They keep a bit of a comical edge on him, including some deftly handled toilet humor, but that only highlights his menace when it’s brought out, rather than neutering it.

But fear isn’t the only emotional beat this movie hits hard. The friendship between Hogarth and the Giant is heartbreakingly honest and real. It’s structured very much like ET, probably intentionally. The kid makes friends with the alien despite his initial fear, and at first it’s all fun and games. He shares his comic books, teaches him about earth, rides his giant friend around, stuff like that. But just like ET, the government gets involved, and Hogarth has to do a lot of growing up very quickly. Of course, ET’s problem was that he was too fragile for Earth’s environment. The Giant has rather the opposite problem.


The movie is beautiful. All hand-drawn animation except for the Giant, who is a gorgeously rendered cel-shaded wireframe. This highlights his alien and artificial nature and it really looks fantastic. The character designs are also very strong. Bird has a real gift for faces, and even the most minor background people are brimming with personality. The animation is really strong on action, too especially the dramatic ending sequences and the introduction to the Giant as he runs afoul of a power station.

Speaking of personality, the voices are also phenomenal. I was somewhat worried about Jennifer Aniston, who plays Hogarth’s mother. She was the only real “celebrity” voice in the movie, and at this point in her career, didn’t really have that much of substance. But she really sold her lines and rose to the occasion. I guess Harry Connick Jr. would be considered a celebrity voice, too, but do people really know what he sounds like when he’s not singing? Anyway, he did a fine job as Dean the beatnik. The remainder of the cast is filled out just the way I like it, with excellent character actors, including Christopher MacDonald as Mansley, John Mahoney as the general who leads the hunt for the Giant, Cloris Leachman as Hogarth’s teacher, and James Gammon and M. Emmett Walsh as actors who show up in like everything. 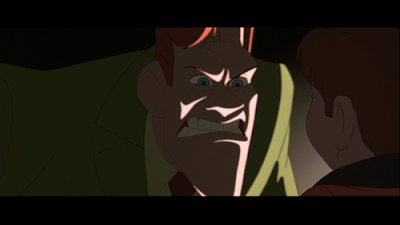 But yet again, the standouts are Hogarth and the Giant. Hogarth was played by child actor Eli Marienthal, best known as Robin in a variety of DCAU productions. He does an amazing job, given that he has to carry pretty much all of the emotional weight of the movie. His performance is one of fantastic energy, variety, and nuance, and he was rewarded with an Annie Award for Best Voice Acting in a Feature. It’s not every 12-year-old who can say they beat out Ralph Feinnes and Suzanne Pleshette for the same award in the same year. Fore the voice of The Giant, the producers originally intended to cast Peter Cullen, the voice of Optimus Prime, but he was unavailable in the small window of time they had, so they started looking at other gravelly-voiced types, finally deciding on an unknown with the appropriate name of Vin Diesel. Diesel is a gifted actor, and paces his few lines with the perfect amount of gravitas and innocence. So it is with the best line of the movie that I leave you. Get ready to cry.

* I rarely mention the Annie Awards on this blog, because I don’t really care about them, but for what it’s worth, Daviegh Chase also won for Lilo and Stitch, and it was well-deserved. Brad Bird would go on to win the acting award himself, for his performance as costume designer Edna Mode in The Incredibles.

* For what it's worth, even though it had 20 million slashed from its budget, the movie was still left with 10 million more in its budget than Quest for Camelot had. But that's still only about a third of the budget of Disney's movie that year, which was Tarzan. 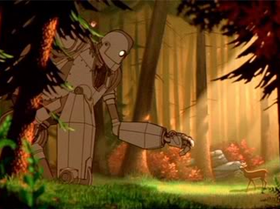 * There is no evidence of the tiny budget, though. To me, this means Brad Bird should direct every movie. He should definitely direct the next Star Trek movie, now that he's in with JJ Abrams.

ADDITIONAL THOUGHTS CONTAINING SPOILERS ABOUT THE ENDING, SO IF YOU HAVEN’T SEEN IT, DO THAT NOW. SERIOUSLY. IT’S NOT THAT HARD TO FIND.

* Brad Bird’s original ending had the Giant remain destroyed and the USA and USSR at war. His co-writer wisely talked him down, pointing out that if you kill ET, you have to bring him back.

* I’m sure glad the Giant didn’t see Man of Steel, because if he had, rather than nobly sacrificing himself, he would have blown up Mansley with his eyeball lasers. “SUPERMAN.” VOOMP. SSSSSSSS. 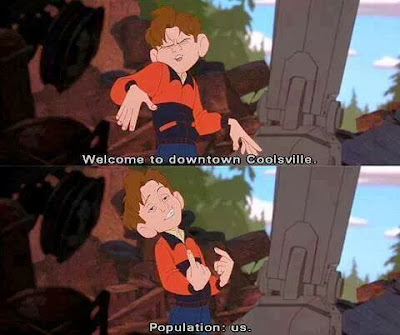