So after Pinocchio and Fantasia underperformed at the box office, Disney was looking to recoup his losses. What he needed was - not a hit, exactly, but something that could be considered a success if it made the same amount of money as the last two. So they bought the 8-page story attached to an unproduced prototype toy and made a movie in a few months on a fraction of their previous budgets. Nervous? So am I. So pick up a cellophane pack of orange marshmallow peanuts, and let’s talk about Dumbo. 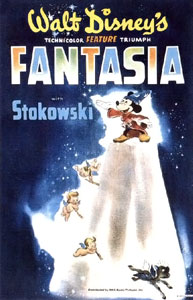 Read more »
Posted by Brian Lynch at 7:18 PM No comments:

A MINOR SETBACK AND FANTASIA… 3?

Well, I knew going into this that staying on schedule would by tricky at best, and in a way, having a setback this early is good, right? Riiiiiight? Because you know how when you get a new computer, sometimes it’ll restart itself randomly to do little updates or whatever? And you know how word processor programs are supposed to recover your work after an unexpected shutdown but sometimes they don't? And you know how when I get on a roll I forget to save my work? Well, you do now, and that’s what happened to my Fantasia review. So I’ll be redoing that this week, and posting it around the same time as my Dumbo review. This may lead to the Dumbo review being short and not very good, but so what? So is the movie.

But I don’t want to leave you a contentless week, so first, let me tell you the basic idea behind Fantasia. See, Walt wanted to make a high-quality short starring Mickey Mouse based on the classic story “The Sorcerer’s Apprentice”, set to the music of Paul Dukas. Working with legendary conductor and teen heartthrob Leopold Stokowski, Disney extended it to seven shorts and made it his third theatrical feature. His idea was that every year or two they would cycle a few new numbers in, toss a few old ones out, and keep the movie fresh and ever growing. Sadly, the film didn’t do so hot and this plan was scrapped until nearly 60 years later, when his nephew produced Fantasia 2000. But we’ll have time for that later. (Like eight months from now, so don’t get too excited.) Like Walt, Roy Jr. wanted to release another one, and the studio had produced four of the new segments when the project was scrapped. They all saw release in some form, as theatrical shorts, or DVD special features, so I have seen them. And to whet your appetite for Fantasia, here’s four things that nearly made it into the canon.

DESTINO - This was a collaboration between Disney and Salvador Dali that they began in 1946 for a future Fantasia, but never completed. The animators, with the aid of Gala Dali’s diary, where she spoke rather more understandably about her husband’s ideas, did all they could to decipher the storyboards, and the final product is… Well, I think it’s beautiful, and it’s certainly a departure from the usual style… Look at it this way, if you read “a collaboration between Disney and Salvador Dali” and got excited, check it out. It’s just what it sounds like.


THE LITTLE MATCHGIRL - Based on the story by Hans Christian Andersen, who desperately needed a hug. Remarkable that Disney changed some of the sad parts and made it even SADDER. Gone is the abusive father, but now the matchgirl is a homeless orphan. Gone is Denmark, now they’re in Russia. It’s absolutely gorgeous and ever so depressing. I highly suggest it.

ONE BY ONE - On the flip side of that, here’s a story about children in a South African town building kites out of neighborhood materials. The colors and animation are top-notch, and the music is infectious. The song is an original composition by Lebo M., the guy responsible for all the music in The Lion King that actually sounded African. This one’s fun and happy and lovely. Watch it. You’ll need it after that last one.

LORENZO - This is about a cat with a sentient tail, which he tries to remove, and which tries to kill him in retaliation. That’s all I know, since the only time this has ever been made available was as a short before the theatrical run of Raising Helen, and I didn’t see that. Nobody did. Anyway, here’s the trailer. Looks really good.

If you wanted to see it bigger, here you go. Just give a click. Open it in a new tab for the largest size available.

Posted by Brian Lynch at 7:34 PM No comments:

Read more »
Posted by Brian Lynch at 7:41 PM No comments:

Read more »
Posted by Brian Lynch at 5:37 PM No comments:

My (Somewhat More Than A) Year With Walt Disney Animation Studios

This holiday season, as my work schedule overwhelmed me and I fell far behind on my other writings, a thought stuck me. There are 52 weeks in a year. There will be, at the end of this year, 52 films in the Disney Animated Canon. And what I really need is something that occupies even more of my time, AND has a strict deadline, which I am terrible at keeping. GOOD LIFE CHOICES HERE, FOLKS.

So, yes, I will be watching one Disney movie a week and reviewing it on this blog. Let me clarify which ones I am doing. I will be sticking to the aforementioned Disney Animated Canon, or the movies made by Walt Disney Animation Studios (Formerly Walt Disney Feature Animation, formerly Walt Disney Productions, Ltd, formerly Disney Brothers Cartoon Studio) and released to theaters. This will NOT include straight-to-video or theatrically-released films by DisneyToon Studios, which means all but four of the sequels are right out. (Sigh of relief). This also doesn’t include movies financed or produced by Disney but released under another label, like The Nightmare Before Christmas or A Christmas Carol; movies that are live action with animated bits, like Mary Poppins or Who Framed Roger Rabbit; or live action Disney films like Swiss Family Robinson or The Princess Diaries. Anything by Pixar is, of course, also out.

Here are the movies I’ll be reviewing, arranged roughly into thematic “ages”. I’ll be updating this with links as I go along. Check back on Saturday afternoon for the first official entry.

THE GOLDEN AGE
(Early experimentation, development of the Disney style, and some growing pains)

THE RESTORATION
(Return to old values, new innovation in animation, firm establishment of the brand)

THE MOURNING PERIOD
(The illness and death of Walt Disney, big financial trouble, and some really weird choices)

THE RENAISSANCE
(Return to musicals, fairy tales, and other Restoration tropes, with a fresh emphasis on story)

THE LATE RENAISSANCE
(As the Renaissance to the Restoration, so this to the Dark Age. More variation in story, no musicals [as such], innovation in writing and art)

THE MODERN AGE
(The Pixar guys are in charge now, so… Good movies.)

Posted by Brian Lynch at 6:29 PM No comments: